Geological CO2 storage combined with enhanced oil recovery (EOR) can be an economically-viable approach to storing CO2 while gaining the benefit of increasing oil recoveries from a reservoir which has undergone primary (and secondary) production.  CO2 is widely understood to mobilize otherwise immobilized oil via processes involving several mechanisms including hydrocarbon solvation into the CO2 phase, physical displacement, oil swelling, lowered oil viscosity, and the formation of a separate "miscible" CO2/hydrocarbon mixed phase as the CO2 contacts lighter hydrocarbons. This mixed phase is characterized to form at the minimum miscibility pressure (MMP). MMP is a major input variable for models used to optimize EOR efficiencies. Long-established methods to determine MMP of crude oil (e.g., slim tube, rising bubble) can be costly, slow, and subject to operational variations. In contrast, newer vanishing interfacial tension (VIT) methods rely on a more fundamental definition of miscibility, i.e., the conditions at which there is no interfacial tension (IFT) between the two fluids. IFT is measured at different pressures by observing the height of oil in a capillary tube (with accurately known internal diameter) and the density of both fluids at each experimental pressure, a requirement that greatly increases the cost and complexity of the instrumentation and operation [1].

Fortunately, it is not necessary to measure IFT at several pressures to determine when the IFT goes to zero since a plot of the oil height in the capillary tube versus pressure will intercept the pressure axis at the same value as the IFT data [2]. That is, both zero IFT and zero capillary rise height occur at the same pressure. Using the simple view cell apparatus (and a suitable pump and temperature bath) shown in Figure 1, this approach yields linear plots, and no density measurements are needed, which greatly reduces instrument cost and experimental complexity. With this simplified approach, MMP values can be rapidly and cost-effectively determined allowing the effects of multiple parameters on MMP to be investigated including (but not limited to) the effects of various reservoir conditions such as temperature, changing gas composition (e.g., the effect of methane in recycle CO2), and changes in crude oil composition on MMP. For example, methane mixed with CO2 increases MMP, while the presence of ethane in CO2 lowers the MMP.  Similarly, the MMP of a crude oil increases greatly with increasing reservoir temperature.

These tests show that dramatic oil/CO2 interactions occur both below and above MMP, and led us to focus on such processes by visually observing the behavior of crude oil/CO2 mixtures at reservoir conditions as the CO2 pressure is raised from below to above MMP, followed by a controlled depressurization to observe the oil behavior as CO2 pressure is reduced (e.g., as could occur between the injection and production wells).

High-pressure view cell videos of CO2/oil interactions show that achieving MMP is not a "magic" condition required for oil mobilization, and that significant mobilization is occurring at pressures below the crude's MMP. In addition, when the pressure is slowly lowered to mimic the drop in pressure from an injection to production well, as much as 1/2 of the mobilized oil is lost from the CO2-mobilized phase, even at pressures well above MMP. For example, when crude from a reservoir that is currently undergoing a CO2 flood is exposed to 5000 psi CO2, ca. 2/3 of the hydrocarbon is suspended in the overlying (upper) CO2 "miscible" phase. However, lowering the pressure to 4000 psi causes much of the mobilized oil to precipitate into the bulk crude, even though the pressure is still higher than the 2800 psi MMP of that oil. Methods have also been developed to sample and analyze the hydrocarbon composition in the upper "miscible" CO2/oil phase, and have shown dramatic changes both in the mass of mobilized oil, as well as the carbon number distribution of the oil in the "miscible" phase. For example, the mass of oil hydrocarbons from a conventional crude oil at 1500 psi (MMP is 1450 psi) was only ca. 1/2 that mobilized at the expected CO2 injection pressure of 2300 psi, and the lower pressure showed a much higher fraction of lower-carbon-number hydrocarbons. Similarly, when the pressure was dropped from the 2300 psi injection pressure to just above MMP, substantial losses of oil occurred from the "miscible" phase with the higher molecular weight hydrocarbons showing the most deposition.

Experiments are continuing to qualitatively and quantitatively describe CO2/oil mobilization processes that occur under different reservoir scenarios, including the effects of changing gas composition on MMP, as well as video investigations on including the CO2 mobilization of residual oil following a water flood. The MMP method and associated effects of changing reservoir conditions will be presented, and videos of CO2/oil interactions at reservoir conditions and their interpretations will be discussed 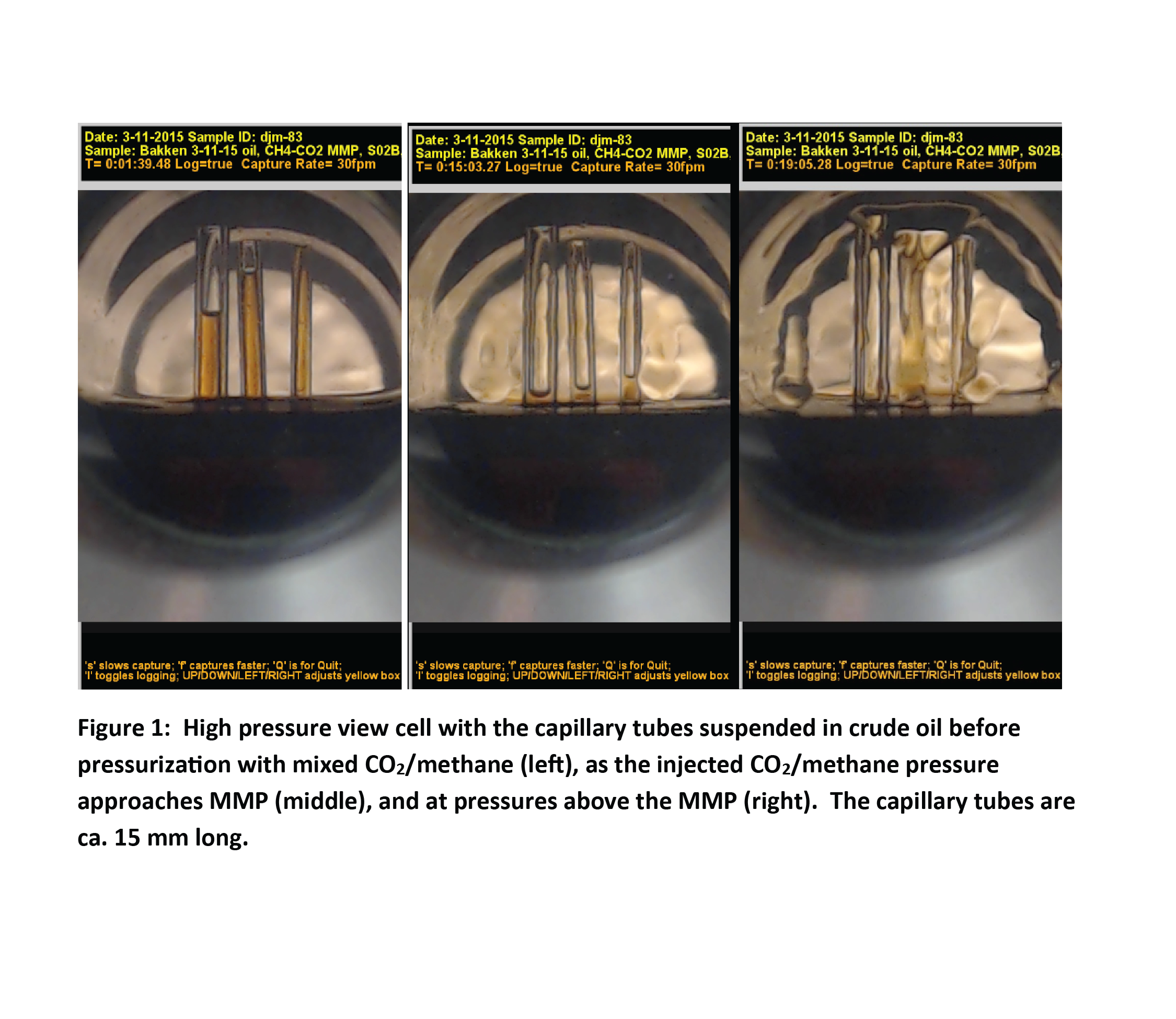 This material is based on work supported by the U.S. Department of Energy National Energy Technology Laboratory under Award No. DE-FC26-05NT42592.