Hot melt extrusion (HME) attracted increasing attention in pharmaceutical manufacturing during recent years due to its mixing capabilities for high-viscous materials and its continuous processing characteristics. The potential of HME to achieve solid solutions is a possible way to overcome the challenge of bioavailability of poorly soluble drug molecules, where the majority of newly developed drug molecules belongs to.

The HME process is used in the polymer industry for many years. Nevertheless, it is still a challenge to predict non-Newtonian, non-isothermal flow and mixing in the complex, rotating geometry of twin-screw extruders. This is especially the case for partially filled screw sections, for which conventional (mesh based) CFD simulations are currently not suitable1. To overcome these challenges, we follow a different strategy and investigate the applicability of the Smoothed Particle Hydrodynamics (SPH) method to the simulation of mixing in HME processes.

SPH is a mesh-less Lagrangian particle method, which approximates the governing equations for fluid flow and can inherently handle free surface flows2. We use the open-source particle simulator LIGGGHTS (www.liggghts.com), which was originally developed for the simulation of granular flow via the Discrete Element Method (DEM), and provides an SPH module.

Different approaches to model wall boundaries in SPH exist, mostly based on particles. However, it is not obvious in SPH how to handle complex shaped geometries (as extruder screws), typically represented by a set of wall triangles. We developed a new approach to achieve an appropriate interaction between wall triangles and SPH particles.

Figure 1 shows snapshots of the distribution of two different particle types (yellow and red) in a cross section of a co-rotating twin-screw extruder, calculated with our method. Figure 2 shows the top view of a similar extruder, and illustrates how a slice of tracer (shown in red) moves and disperses in axial direction due to the action of the screw. This allows a detailed analysis and comparison of the mixing performance of different screw geometries, e.g., conveying elements or kneading elements. 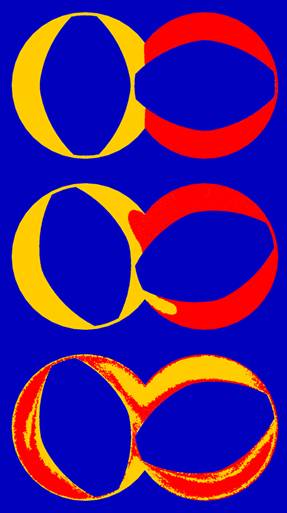