Cubic silicon carbide (3C-SiC) has been shown to be a suitable substrate for the growth of graphene (Suemitsu et al. 2009). For advanced applications, the uniform graphene film on an insulating substrate is required. Thermal decomposition of SiC at atmospheric pressure has been proposed to improve the homogeneity of the formed graphene layers compared to vacuum conditions (Emtsev et al. 2009). A considerable advantage of using SiC-based methods to grow graphene is that it is not required to transfer the as-grown graphene onto another insulating substrate. We have studied the post-processing of previously manufactured nanocrystalline 3C-SiC particles by induction heating at atmospheric pressure (Miettinen et al. 2011, Miettinen et al. 2013). Three precursor powders with increasing crystallinity were synthesised at 1000 şC, 1200 şC and 1400 şC by atmospheric pressure chemical vapor synthesis and induction temperatures from 1900 şC to 2600 şC were used.

Growth of carbon sheets and spherical carbon particles was observed (Fig. 1). The spherical carbon particles turned out to be new carbon structures, i.e. carbon nanoflowers (CNFs). Curved graphite layers grew from the Si-C core, which decreased in size with increasing induction temperature and eventually disappeared above induction temperature of 2200 şC. To our knowledge the formation of this kind of structures has not been reported previously. The growth of CNFs may proceed through the cap formation mechanism proposed by Wang et al. (2007). The existence of C-C σ-bonds perpendicular to the SiC surface and the persistence of C-C π-bonds results in a repulsion in the cap center between two adjacent dangling bond sites which is responsible for the formation of a stable curved structure. The growth mechanism was probably induced by simple thermal decomposition of the SiC surface followed by the evaporation of Si. The number of the carbon layers in the nanoflower structure decreased with increasing temperature from 11 at induction temperatures below 2200 °C to 7 at the induction temperature of 2600 °C with the precursor powder synthesized at 1000 şC. The number of layers decreased also with increasing crystallinity of the precursor material and 5 layers were detected with the most crystalline precursor at the induction temperature of 2050 °C. The carbon sheets were more abundant when the precursor particles of higher degree of crystallinity (SiC-1400) were used. The SAED analysis indicated crystallinity of the carbon sheets and the X-ray diffraction analysis verified the presence of crystalline carbon. Raman spectrum displayed sharp G and 2D bands with intensity ratio 2D/G over four which is typical for single-layer, undoped graphene (Ferrari 2007). A very low intensity D band in this spectrum indicates a highly ordered structure. 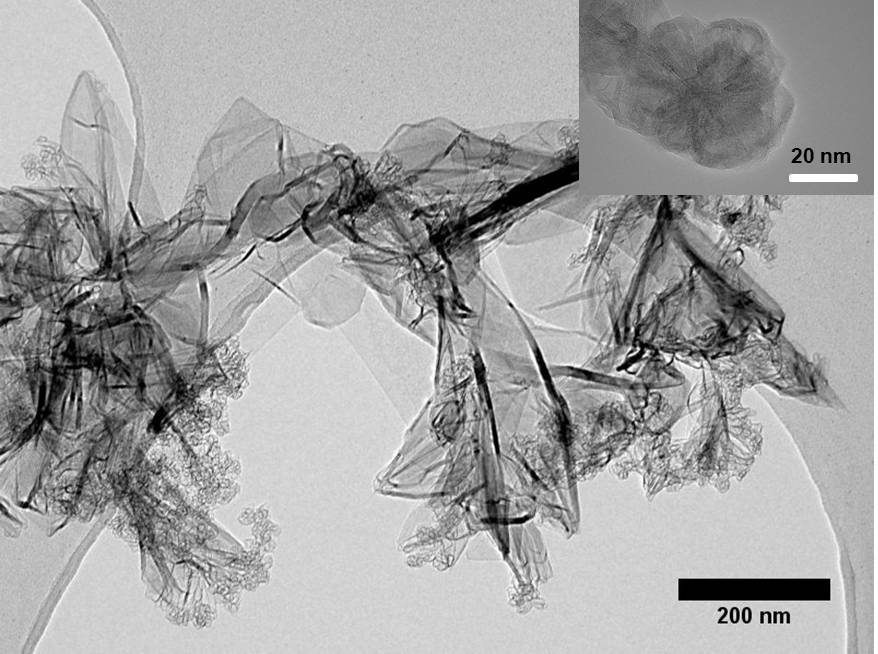 Fig. 1 Transmission electron microscopy images of the produced carbon sheets and nanoflowers (inserted is a larger magnification of the nanoflower)

The method presented is easily scalable and opens up the possibility to produce the advanced carbon structures that can be exploited as precursors for numerous applications, e.g. deposition of graphene films or in biomedical applications.

This work was supported by the strategic funding of the University of Eastern Finland under the NAMBER spearhead project.