327470 Catalytic Hydrogenation of Bio-Based Succinic Acid for the Production of 1,4-Butanediol Through the Indirect Pathway

For the Production of 1,4-Butanediol Through the Indirect Pathway

1,4-Butanediol (BDO) is the valuable C4 chemical compound with the formula of C4H10O2 (HO-(CH2)4-OH, MW = 90.12 g/mol) and this colorless viscous liquid is used as a solvent due to its high boiling point (235°) with the miscibility to water and ethanol.

BDO could be used in the manufacture of some types of plastics such as polybutylene terephthalate, co-polyester ethers, elastic fibers, polyurethanes and applied as a precursor to for the synthesis of g-butyrolactone (GBL) and tetrahydrofuran (THF) which could be facilitated to produce chemical solvents, cleaning agent for electronics and various biomedical pharmaceuticals [1-6]. Also the demand for solely BDO has steadily increased, especially in Japan, owing to its use in the manufacture of polytetramethylene glycol (PTMEG) and polybutylene terephthalate resin, along with a steady increase in the use of polyurethane.

BDO is now currently produced based on the petro-chemical routes, such as the Reppe [2], Davy McKee [1] and Acro processes [4]. BDO and its derivatives are highly needed by several related industries and the production amount of BDO is steadily grown. The growth rate of world market of BDO is suppress that of world average GDP and reached at 1250000 ton at late 2007. BDO is mainly produced in developed countries like USA, west Europe and Japan with each portion of total BDO producing amount is 37%, 44% and 12%.

As discussed above, the entire quantity of BDO is currently produced using petrochemical resources: typical processes such as Reppe process using acetylene as starting material, Lyondell process using propylene oxide, Davy process using maleic anhydride and Mitsubishi-BASF process using butadiene. The main BDO production processes are Reppe and Lyondell process, but the processes use the acetylene and propylene oxide which chemicals are denoted as Group A as an exploit materials which in higher explosion rate than ethylene, ethane and benzene [7]. There were repeatedly accidents in handling or storage in various nations such as explosion in reaction vessel in Germany in 1996 in reaction of acetylene and explosion in storage depot in Netherland in 2003.

Moreover, the price of petrochemical resources continually increased up to the $100 crude oil price dollar per barrel in 2012 which increased about 10 times than the price of oil in 1998 [8]. Therefore, the alternative technology for the sustainable production of BDO should be developed for these above mentioned reasons.

Succinic acid (SA) was recognized as one of the important platform chemicals which could be produced from the carbohydrates and SA was re-selected the top platform chemicals in 2010 [5]. SA is a 1,4-dicarboxylic acid in its chemical structure and SA could be produced from petrochemical process through the partial oxidation of n-butane but it is recently produced by the fermentation of various biomass feedstocks using wheat, corn wastes and several others.

BDO could be obtained from the succinic acid using hydrogenation process (chemical transformation) with the heterogeneous catalysis. There were several researchers studying this hydrogenation of SA and one of the pioneers of the chemical reaction was R.V. chanduhari et al. and they applied the ruthenium-cobalt catalyst for the production of BDO [9]. Several years later, the Minh group studied the binary catalysts consisted of the palladium-rhenium catalysts with the highest yield of BDO of 60% [6]. This direct hydrogenation of diacids like SA to diol compounds such as BDO have been considered as a hard work as described in the several literatures even they using the carefully designed homogeneous catalysis.

Therefore, the indirect pathway for the production of BDO was suggested in this study (scheme 1). After the dehydration of SA to SAN (succinic anhydride), the BDO was produced by the hydrogenation of SAN and GBL (g-butyrolactone) and GBL to BDO, which were the objective of this study. The hydrogenation of SAN to GBL using ruthenium nanoparticle embedded silica catalysts (Fig. 1) [10, 11] and GBL to BDO using copper-zinc binary catalysts (Fig. 2) [12] would be discussed using various heterogeneous catalysts and using thermodynamic and reaction kinetic analysis. By using this indirect pathway, the yield of BDO increased up to 73%. 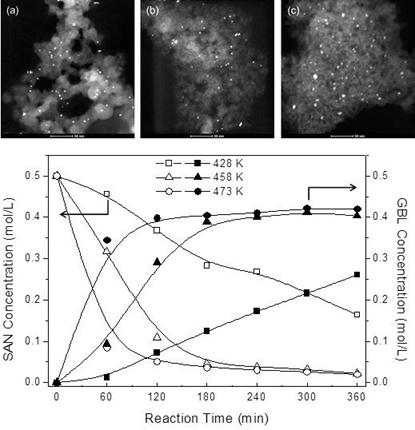 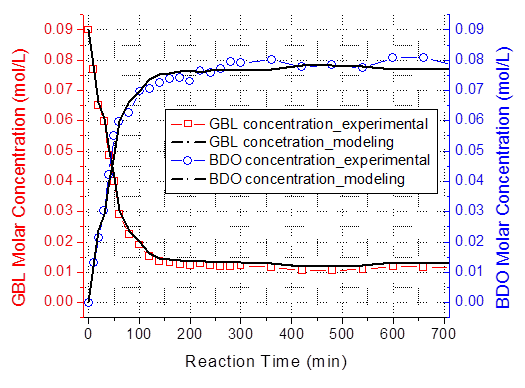 [1] M. Messori, A. Vaccari, Reaction Pathway in Vapor Phase Hydrogenation of Maleic Anhydride and Its Esters to g-Butyrolactone, Journal of Catalysis, 150 (1994) 177.

[3] A. Küksal, E. Klemm, G. Emig, Reaction kinetics of the liquid-phase hydrogenation of succinic anhydride on CuZnO-catalysts with varying copper-to-zinc ratios in a three-phase slurry reactor, Applied Catalysis A: General, 228 (2002) 237.