In common coarse-graining (CG) approaches one starts from an atomistic, bottom-up, description of molecules and proceed to integrate degrees of freedom, simplifying the force field in order to speed up the computer simulation of complex molecules and mixtures. [1-4] By contrast, the CG intermolecular potentials can also be obtained with a top-down approach by reproducing the macroscopic configurational properties of the system with a molecular-based equation of state. The latter approach is considered here, in particular, the use of the SAFT-γ Mie version of the Statistical Associating Fluid Theory (SAFT) which is based on interactions of the Mie form and has successfully been applied to simple organic molecules [5-7]. In our current work we explore the role of inter- and intra-molecular interactions in SAFT-γ Mie force fields of the linear alkane homologous series.

Despite its success in correctly reproducing the thermodynamic properties of complex fluids, SAFT based approaches do not take into account the structure and flexibility of molecular systems explicitly, apart from the assumption that chains of m segments are formed [8]. We have addressed this issue by combining the SAFT-γ Mie top-down approach with a parameterization of the CG intramolecular (bonding) potentials on the basis of atomistic simulations.

As prototypical molecules we first perform the analysis for long chain n-alkanes. In order to obtain a CG model, three consecutive backbone carbon atoms and their bonded hydrogen's are all grouped together to form a "super-atom", or CG moiety.  The inter-molecular parameterization of the CG beads with the SAFT-γ Mie methodology then leads to two possibilities, depending on the recognition (or not) of the distinct identity of the terminal end CH3 group. In the first model (homonuclear) the beads representing the end and intervening CG alkyl groups are taken as identical; in the second model (heteronuclear) a distinction is made between the interactions of the two types of CG beads. (Fig 1)

Figure 1 Schematic of the CG strategy for n-nonane, lumping three backbone carbon atoms into single beads. For the homonuclear model (left) all beads are treated on an equal footing, and for the heteronuclear model (right) the CH2CH2CH3 beads that contain the CH3 end group and the CH2CH2CH2 beads that make up the intervening groups are distinguished.

To address the importance of chain flexibility, we have performed single component molecular dynamics simulations of an equivalent united-atom (UA) model using the NERD force field [9]. From the set of atomistic trajectories the CG intermolecular force field was computed using the potential of mean force of the corresponding CG degrees of freedom, e.g., CG bond distances and angles. The CG bond stretching and bond angle bending interactions were then superimposed to the CG intermolecular parameters. The full model includes both inter- and intra-molecular contributions.

An assessment of the different contributions to the full intermolecular potential is made by comparing the results obtained from the molecular dynamics simulations of fluid phase equilibria as well as the interfacial, transport and structural properties. An example of how the structural properties of nonane are affected when using different intra- and inter-molecular parameters can be seen in Figure 2. The g(r) results obtained for the homonuclear model was the same as the heteronuclear, so has not been included to keep the figure simple. 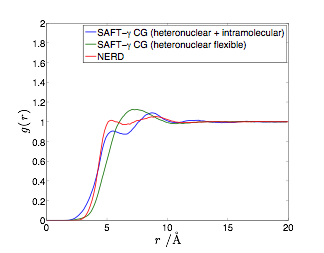 The inclusion of intra- molecular interactions CG models allows for an improved description of thermodynamic and structural properties without a detriment to the speed of the calculations. An additional advantage of the heteronuclear description is that they provide fully transferable CG models for linear alkanes.