The understanding of phase behavior and thermodynamic properties of amphiphilic systems is an essential component in the design of complex fluid mixtures commonplace, such as health care products, pharmaceutical industry, and environmental protection. However, the sheer complexity and diversity of these systems, the large number of possible components and process conditions makes the experimental study an overwhelming task. While modern simulation techniques allow an insight into phase behavior of complex fluid systems, the appropriate choice of the modeling technique is crucial, as some properties are not accessible due to limited resolution and reproducibility. The use of coarse-grained molecular simulation, as opposed to a fully detailed atomistic approach, overcomes some of the limitations of spanning the time and length scales required to study the kinetics and self-assembly of complex systems. The problem of parameterization of the force field is a key factor since the accuracy and robustness of the force field determines the reliability of the molecular simulation results.

Monoalkyl ethers of poly(ethylene) glycols, (CiEj), are particularly interesting for their wide range of applications, particularly due to their rich mesophase phase behavior. Therefore, those systems have been widely studied both experimentally [1] and by molecular simulation [2]. These surfactants exhibit self-assembly in aqueous solution, as do their more complex biological analogues, with the added simplicity of being non-ionic. Most coarse-grained (CG) simulations are based on intermolecular potentials, which are effectively integrated version of more fine-resolution atomistic-level models [3,4].

In opposition to this, in this work we develop a CG model where the force field parameters are obtained from a top-down approach, by effectively averaging a large number of macroscopic thermodynamic states with the aid of a fluid equation of state. We use the Statistical Associating Fluid

Theory (SAFT-γ Mie EoS) to obtain the potential parameters for coarse-grained moieties [5,6,7]. The potential parameters for these CG "super-atoms" are estimated from thermophysical properties (density, vapour pressure, surface tension, etc.) of simple organic molecules, e.g., alkanes and ethers that share chemical commonalities with the segments of the amphiphile. The cross-interaction parameters are obtained from the properties of the corresponding mixtures.

Molecular Dynamics simulations in an explicit solvent are carried out at different surfactant concentrations to investigate the thermodynamic, interfacial and structural properties of the systems. For a low surfactant concentration, we observe self-assembly into micellar aggregates (Fig. 1), as well as the interchange of the single surfactant with the micelle, the fusion and the separation of two micelles and other equilibrium and dynamic signatures of micellar systems. Using a cluster analysis algorithm, we are able to identify individual micelles and calculate relevant structural properties, such as aggregation number, aggregate size distribution and shape, radius of gyration and density profiles. For higher surfactant concentrations, the formation of hexagonal and lamellar phases is observed. Further validation of the CG model has been undertaken in respect to water-air tension, surface excess properties, nematic order parameter, critical micelle concentration and aggregate properties of amphiphiles of different chain length.

It is very gratifying to find that the proposed force field is transferable for prediction of various properties of these mixtures and also for mixtures of the components of related homologues. In this manner, the SAFT- γ Mie Eos establishes a direct robust link to macroscopic properties and enables the estimation of the CG force field parameters in a very fast and efficient way. The force field parameters obtained from the equation of state, can be used as a direct input in molecular simulation to explore different properties of the mixture that are usually not accessible via an equation of state, such as structural and interfacial properties. 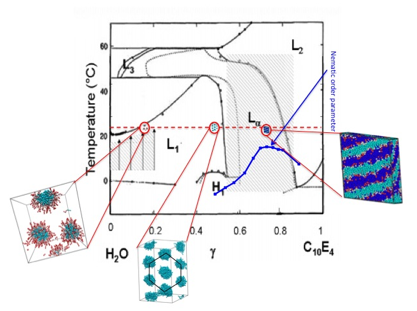 Fig. 1: Experimental phase diagram for C10E4 surfactant in water (taken from Fournial et al. [8]) and snapshots corresponding to the simulation results at 298 K at 5 wt%, 50 wt% and 70 wt% surfactant in water. The blue line denotes the nematic order parameter calculated for the surfactant concentration range between 50 and 90 wt%.