Georgia Institute of Technology School of Chemical and Biomiolecular Engineering

poly(N-Isopropylacrylamide) (pNIPAAm) is a thermally responsive polymer that undergoes a phase transition when heated above its lower critical solution temperature (LCST). In said transition, pNIPAAm, a hydrophilic, water-soluble compound at room temperature, becomes hydrophobic and water insoluble once heated above its LCST. By incorporating various coploymers, modifying end groups and controlling molecular weight and tacticity, the LCST transition can be controlled to occur at an elevated or depressed temperature and in a broad or sharp temperature range. While most research of pNIPAAm is done on a molecular level, on a macroscopic level this compound has some promising properties as well; if dissolved in water and cross-linked, pNIPAAm forms stiff hydrogels and in LCST transition, these hydrogels quickly shrink and squeeze out water.  Since these gels are also biocompatible, they are studied for potential biological applications (eg. osmotic skin expanders1, drug delivery nanogels2). Yet, standard hydrogels made from conventional pNIPAAm are limited by an LCST lower than physiological temperature, weak mechanical properties and low total shrinkage. In this research, three classes of gel are studied: 1) conventionally formed pNIPAAm hydrogels, 2) hydrogels formed from pre-polymerized atactic pNIPAAm (polymer side chains are randomly oriented) and 3) hydrogels formed from pre-polymerized syndiotactic pNIPAAm (side chain orientation alternates in chirality) to see if shrinking rates, LCST, and mechanical strength improve significantly in the atactic or syndiotactic gels.

LCST Shrinking Kinetics: To form hydrogels, a pNIPAAm in water solution containing methylene bisacrylamide, a cross-linking agent, was mixed under low oxygen, high nitrogen conditions with ammonium persulfate, a radical initiator. Atactic and syndiotactic polymers were formed in the same manner described by Chang et al.3 Gels of uniform composition and shape were formed within syringes then swollen in water over night. To test the LCST shrinking kinetics, swollen gels were exposed for ten minutes to twelve different temperatures between 20 and 52°C, the water exuded after every ten minutes was removed via cannula and gels were weighed.

Mechanical Testing: In order to compare the mechanical properties of the three classes of hydrogel, the Young's Modulus of Compression of 10mm high, 14 mm diameter gel cylinders which were allowed to swell in water overnight was determined. In order to get compression data, a Bose Enduratec tensile/compression testing machine was used operating at a .25mm/s displacement rate using a 24.9 N load cell.

Scanning Electron Microscopy: In order to get an idea of the architecture of our hydrogel on a nanoscale, “dry” scanning electron microscopy was used. In order to maintain the microscopic architecture of a regular “wet” hydrogel, cross sections of gels were made and then frozen in liquid nitrogen to keep water in an amorphous state. Gels were then freeze dried and analyzed by SEM.

LCST Shrinking Kinetics: In the shrinking kinetics studies it was demonstrated that the hydrogels made from the pre-polymerized pNIPAAm had some promising properties as candidates for biomaterials; especially the ones formed from the special syndiotactic polymer developed in our lab. From Figure 1 it can be seen that hydrogels formed from atactic and syndiotactic pNIPAAm shrank over 30% more by mass than those formed from conventional pNIPAAm. We theorize that this increased shrinking comes from the actual architecture of our hydrogels. In Figure 2, this theory is illustrated: in cross section A, the predicted architecture of a conventional hydrogel, cross-links form in all directions. Thus, when the hydrogel asymmetrically shrinks, more water gets trapped in between pores. However, in the pre-polymerized pNIPAAm hydrogel illustrated in cross section B, cross links (shown as red lines that connect polymer chains) only occur in certain areas. Thus, as gels asymmetrically shrink, water is more able to get pushed out by polymer tails. In addition to this finding, not only did the syndiotactic pNIPAAm hydrogels shrink to a greater overall extent than the atactic hydrogels in LCST transition, the syndiotactic hydrogels exhibited a much higher LCST (38°C); one that was higher than normal human physiological temperature. This data is significant for biological applications; in addition to decreasing in mass by 63%, the LCST of syndiotactic hydrogels is above human physiological temperature (37°C); thus, syndiotactic hydrogels can be incorporated with a thermal trigger to release a great amount of solvent potentially containing an active chemical agent in a biological setting. 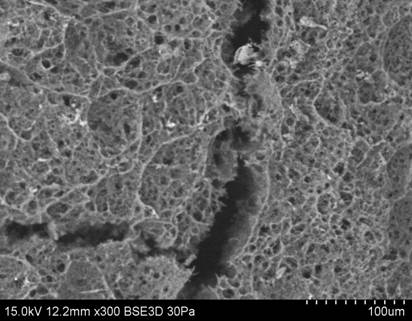 Mechanical Testing: From table 1 it can be seen that in the mechanical testing, as expected, the conventional hydrogels had the greatest Young's Modulus of Compression. We theorize that this is also a result of the architecture of our gels - in the conventional hydrogels, since cross links only form in certain places in the pre-polymerized gel networks, they are less capable of bearing a load on a molecular level. Unexpectedly, as is seen in Figure 5, syndiotactic polymer based hydrogels had a 136% higher Young's Modulus of Compression than the atactic pNIPAAm hydrogels. It is theorized that this is a result of an organization of water molecules around the end groups of syndiotactic pNIPAAm chains that does not occur in atactic chain end groups. While conventional hydrogels have better mechanical strength and are more comparable to human tissue, it is possible copolymers can be incorporated into gels formed from pre-polymerized pNIPPAAm to create gels that have the promising shrinking kinetics data above as well as good mechanical strength (e.g., this is done using proteins from silk worms in Hudson et. al.4). 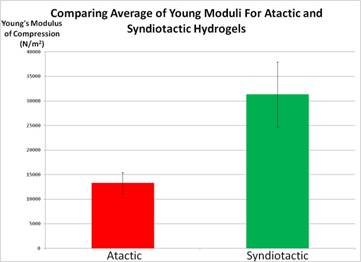 Conclusions: Hydrogels made of syndiotactic pNIPAAm have been identified as a promising biomaterial; not only do they shrink by 63% mass in LCST transition (about 40% more than conventional pNIPAAm hydrogels), they display an LCST temperature of 38°C, a value greater than human physiological temperature, without the use of copolymers or toxic chemicals. While hydrogels made from conventional pNIPAAm had the most compressive strength, syndiotactic pNIPAAm gels were twice as strong as the atactic ones. Thus, with the hydrogels made of pre-polymerized syndiotactic pNIPAAm, we have a biologically compatible material with improved compressive strength that exudes a great amount of water (potentially containing a drug or another active chemical agent) when heated to a temperature higher that the human body.