291496 Investigation of Particle-Level Structures in Oil and Aqueous Suspensions

It has been shown previously in our group that adding moisture to granular materials allows for controlled mixing or segregation. This project focuses on expanding the aforementioned concept to colloidal systems consisting of discrete oil and aqueous phases with further focus on the creation of liquid bridges that cause this phenomenon.  By manipulating the contact angle and particle size we can predict whether a given system will segregate or mix. Acrylic and glass beads in various hexadecane (C16H34) and water mixtures were investigated to identify the particle-level structure of suspensions. Many antibiotics and children medications are delivered as suspensions; therefore creating a robust method of controlling the particle-level structure of a given suspension could have implications for the pharmaceutical industry.

Enhanced segregation and mixing though the addition of a small amount of moisture to a binary granular mixture has been previously shown through experiments. This phenomenon can be predicted by pseudo phase diagrams, FIG. 1, that depend on the size, density, and surface properties of the particles [1].  A main assumption in this theory is that the forces of interest are limited to cohesive interactions (FC) and the weight of the particle (FW), which wield the granular bond number (Bog=FC/FW)[2].  However in systems where the rotational rates are increased the forces due to shearing cannot be considered negligible and thus the drag force (FD) on the particle is used instead of the weight when calculating Bog.  This new ratio using FD is the granular capillary number (Cag=FC/FD)[3].  In slow rotational systems it is expected to see mixing when adhesion dominates, when Bog12>1 and Bog12>{Bog11Bog22}, and segregation when cohesion dominates, Bog11>Bog12 or  Bog22>Bog12[2].

Of the properties required to create this phase diagram contact angle is the most difficult to measure for spherical objects. This phase diagram theory has been applied to systems consisting of particles, liquid, and air.  It is the focus of this project to investigate discrete three phase systems where the bulk phase is no longer air.

Acrylic spherical particles, ρ=1.85g/cm3, averaging 2.0mm in diameter were also cleaned.  2.0mm particles were individually placed cuvettes and submerged in deionized water. A 100μL syringe was used to place a drop of C16H34 on each particle and an image was taken.  The three-phase contact angle, Θa,o, was measured.

Equal volume amounts of glass particles and acrylic particles were placed into an 180cm3 container attached to a tumbler system. The system was filled with water and increasing amounts of C16H34 until interactions were observed. The opposite scenario was also tested, Table 1.  The tumbler speed was increased until particles began to fall and stay in the center of the vessel. 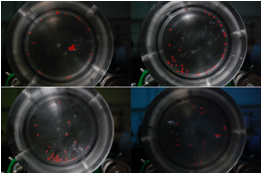 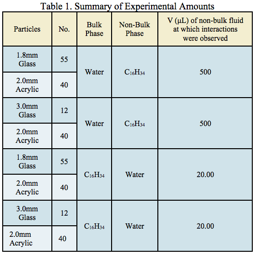 The interactions of two particles in a two-phase system have not been previously investigated and a new theory was created to help describe the strengths of these interactions. It is assumed that Fc for a two-particle system is dominated by the more massive particle, Rmax, in Eq. 1. FD affecting a system of two particles needs to be accessed as a difference of the terminal velocities (Ut) where the particle hardest to fluidize dominates motion and Ř is the radius of the particle where Ut is minimized Eq. 4. Equations 1, 2, 4 and 5 combine to yield Eq 8.  This equation for a capillary number for particles that is dependent on only size, R, density difference, Δρ, and interfacial surface tension, γ. This is in contrast to Eq 9, which also has a dependence on Θ [2]. 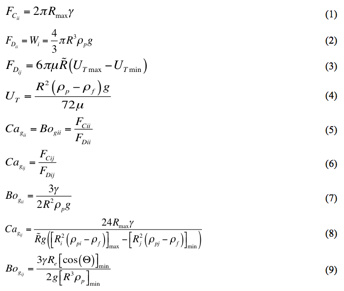 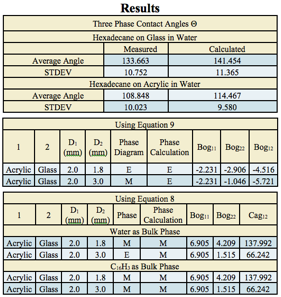 The measurements of Θ would indicate that the particles would behave in a repulsive manner rather than attractive as is seen in the experiment.  When particles were mixed in petri dishes few interactions were observed as it appeared that C16H34 wetted the container as well as particles.  From this study the theory proposed in Eq 8 cannot be confirmed nor contradicted for discrete three phase systems. Due to inconclusive Θ measurements it is difficult to tell where in the phase diagram each pair of particles should fall.  In the tumbler set up much of the oil was lost to the surfaces of the container required much more than disperse fluid in the C16H34 in water case than should theoretically be required to create pendular state interactions. Also from the tumbler experimental set up it can be seen that particles that have largely different Ut can be made exhibit 1-2 interactions by altering the bulk fluid. From here I would like to revisit the measurements of contact angles on spherical surfaces and to refine my theory to reflect this research.

I would like to thank Dr. Robert M. Enick, Dr. Robert S. Parker, Dr. Sachin Velankar and Bob Maniet for helping me in over coming hurdles in the process of completing my experiment.