Chemical grafting of chromatographic resins for the selective adsorption of PEGylated proteins.

PEGylation reaction, or covalent attachment of a polyethylene glycol (PEG) molecule to a therapeutic protein is a recent strategy still in development aiming to increase the pharmacologic effect and decrease the degradation rate of the protein during its circulation in the body. One of the main challenges in the production of PEGylated proteins is related with the downstream processing, due to the complex mixture of reaction products, resulting in a population comprising mono- and di-PEGylated species as well as several positional isomers. The resolution and characterization of these positional isomers gains higher relevance due to the fact that in most of the cases only one of the isomers exhibits the desired therapeutic effect.

Recent reports of our group suggest that PEGyilated proteing exhibit a marked prefference for the PEG-rich phase of a PEG/salt aqueous two-phase system (ATPS)1  suggesting a posible affinity partitioning that could be applied to a PEGylated surface such as the chromatografic resin.

Sepharose 6B was subjected to chemical modification according to the protocol reported by Sundberg and Porath2 for the covalent attachment of PEG 550, PEG 2000 and PEG 5000. The amount of polymer covalently linked to the resin was determined to be from 138 to 180 mg PEG/g resin. An increase in the static binding capacity in HIC conditions was observed for the three modified resins (3.0, 3.6 and 2.6 mg BSA/mL resin respectively), as compared to the unmodified Sepharose 6B (1.2 mg BSA/mL), suggesting changes in hydrophobicity of the resins due to the PEG molecule.

Dynamic binding capacities were determined for the three modified supports in 1 mL Tricorn columns using a Äkta Prime system (GE Healthcare) under the conditions reported by Cisneros-Ruiz et al. (2009)3 (Figure 1), showing a decrease in DBC fro BSA between the unmodified Sepharose compared to modified resins. Different capacities were observed between the molecular weight of the polymer used for grafting the chromatographic curface, mainly due to the difference in the chain length, having a direct impact on the hydrophobicity of the resin. Additionally a change in the conformation of the polymer attached to the resin creates a different environment for protein adsorption. 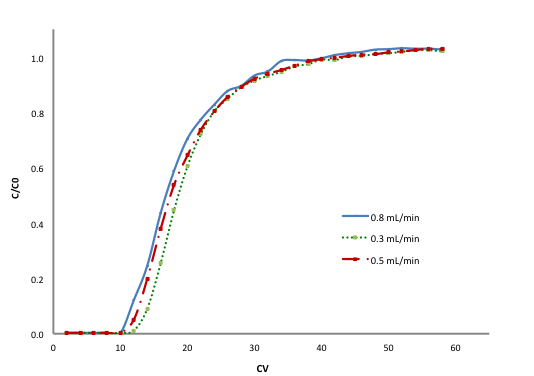 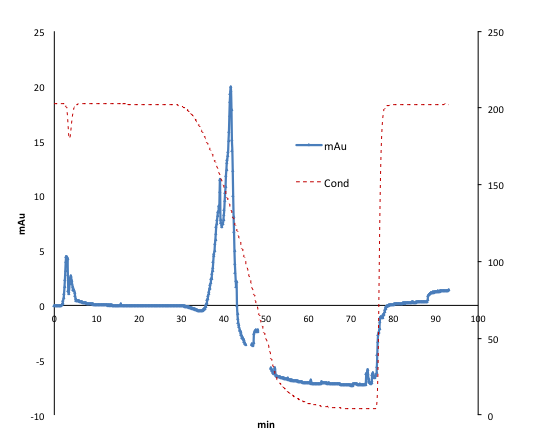