During migration, cells exert forces in their immediate microenvironment known as the extracellular matrix (ECM), a nanofibrous mesh which provides geometrical and chemical cues that directly affect cell behavior1.  While the nature and magnitude of these forces are dependent on the ECM itself, they can also reveal important information about the mechanical state of the cell2.  For instance, recent works have demonstrated that traction forces can be directly related to cellular differentiation, and cancer progression has also been shown to have an effect on the cell's mechanical state, thereby altering contractility3,4.  Many recent efforts have been devoted to measuring cell traction and migration forces using micropost arrays and deformable gel surfaces, which are unable to capture entire 3D effects on force generation3,5,6. Therefore, there is clearly both great interest and need for the ability to quantify the forces a cell exerts on the ECM using a system which allows cells to migrate along 3D geometries mimicking ECM mechanical environments.  In this work, we present a method to measure real-time migration forces of single cells using a system of suspended nanofiber beams whose stiffness (N/m) is readily adjustable.  As cells attach and begin moving along these scaffolds, individual fibers with clamped boundary conditions deflect in the elastic limit, allowing cell migration forces to be calculated via classical beam theory.  With this technology, cells may be monitored in real-time for the forces they exert on their ECM-mimicking environment.  Implications of this work include understanding internal cell forces during differentiation and therefore the future design of accurate tissue engineering scaffolds, drug testing platforms, and identification of diseased cells including cancer.

Scaffolds were fabricated using the previously reported STEP (Spinneret-based Tunable Engineered Parameters) platform, a non-electrospinning fiber manufacturing technique7–10.  Briefly, polymer solution is injected through a microneedle and a rotating substrate is brought into contact with the resulting droplet.  As a controlled stage translates the hollow scaffold, aligned fibers are deposited on hollow substrates in criss-cross layers which were fused at intersections forming nanonet structures.

After creating the scaffolds, C2C12 mouse myoblasts were seeded onto the STEP scaffolds and attached within 4-6 hours. Cells then began migrating along the structures.  .Migration was visualized via time-lapse videography using an incubating microscope with a digital three-axis stage (Zeiss).  Images were taken every 10 minutes for 12 hours, which captured cells deflecting STEP fibers.  Built-in software allowed measurements to be taken relevant to calculating forces including fiber length, positioning of the load, and deflection distance.

Cells were assumed to cause deformation to the nanofibers according to classical beam theory with clamped-clamped boundary conditions in the elastic limit, described by the following equation:

where ‘P' is the applied load to fiber length ‘L' at distance from the boundary ‘a'.  The elastic modulus ‘E' is a material dependent parameter, and the moment of inertia ‘I' is shape dependent.  Therefore, as a deflection ‘d' is noted, the applied load may be calculated.  Forces were assumed to be applied as a single load perpendicular to the point of maximum deflection, an assumption that will be further investigated in the future.

After spinning two layers of fibers on the STEP scaffolds, fiber intersections were fused together (Fig. 1a).  As shown in Fig. 1b, the resulting grid-like nanostructure can be considered as a system of springs with individual fiber stiffnesses (N/m) being dependent on the fiber material, diameter, and length as well as positioning along the fiber.  Designing a scaffold in which the longitudinal fibers are stiffer than the latitudinal fibers results in a system in which the less stiff fibers deflect while the larger fibers can be considered immobile. 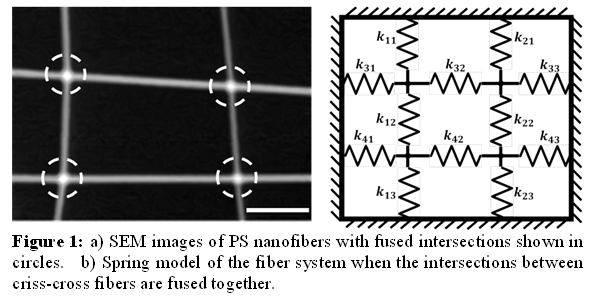 Cells were found to attach to the scaffolds and began migrating along the suspended fibers.  As cells attached to both the stiffer and less stiff fibers simultaneously, the less stiff fibers deflected under forces exerted by the cells (Fig. 2).  These deflections were measured and then calculated using the aforementioned equation to obtain migratory cell forces in a natural 3D fibrous microenvironment.

Figure 2 shows an example timelapse of a C2C12 mouse myoblast migrating and deflecting a horizontal fiber.  In this 30 minute sequence, the cell progresses along both fiber axes, causing the cell to stretch further and further apart.  Using frame C as an example calculation, a PS fiber of d=500 nm diameter spanning L=100 μm, pulled a=55μm from the boundary would require an 18 nN force to deflect a distance of d=10μm.  This is in good agreement with other force measurement systems, which often predict migratory forces ranging from tens to hundreds of nN11.  While this does not necessarily represent the maximum force that a C2C12 is able to exert, it does show what the cell was experiencing during that stretching phase.

In addition to testing normal cell lines, DBTRG (Denver Brain Tumor Research Group) cells were also examined.  These cancerous cells, which originate from an aggressive brain cancer called glioblastoma multiforme, were also seeded onto the STEP scaffolds for force evaluation (Fig. 3).  Again, as an example calculation using the above timelapse in frame C, a PS fiber d=500 nm in diameter spanning L=108 μm, pulled a=28 μm from the boundary would require a 23 nN force to deflect a distance of d=7.5 μm.  As more cells are evaluated in each condition, we will be able to distinguish weather or not the cancerous state of a cell changes its migratory forces.

We have presented a method which for the first time measures real-time migratory forces of single cells using fused, suspended nanofibers.  This system is advantageous in that it accounts for 3D topographies that would be experienced by cells in vivo.  With this method, migration forces have been measured in the 10-100 nN range, but more or less sensitive structures may be developed simply by adjusting the stiffness of the fibers which makeup the scaffold.  Decoupling force vectors from attached cells remains a challenge and will continue to be investigated in the future.  In addition to gathering additional data for cancerous and non-cancerous cell lines to determine a baseline migratory force value for each case, this system will be used to simultaneously evaluate migratory forces and associated differentiation of stem cells in future work.