Microbial fuel cells (MFCs) utilize electrochemically active microorganisms such as Geobacter spp. and Shewanella spp. to oxidize organic fuels for electricity generation. MFCs are envisioned as clean and sustainable sources of energy for sensor systems in remote locations, miniature robots, and even wastewater treatment systems. However, the low power density prevents the wide application of MFCs in industry and other areas. This limitation is caused by multiple reasons, including little understanding of the mechanism of electron transfers between microorganisms and electrodes, low electrochemical activity of electrodes, low activity of microorganisms, and poor system designs. Previous studies have demonstrated that modification of the surface characteristics of the anode can have significant effects on the performance of MFCs; however, the underlying cause of this improvement has not been completely understood. Most surface modification methods not only changed the surface topography of the anode, but also changed the material or functional groups on the surface; therefore, the effect of change in surface topography alone has not yet been quantified.

Shewanella oneidensis MR-1 (ATCC 700550) from -80 ⁰C glycerol stock was aerobically cultured on a Lysogeny Broth (LB) agar plate at 30 ⁰C overnight. A single colony was isolated from the plate and transferred to 10 ml of LB solution in a 125 ml flask. The culture was grown at 30 ⁰C and 150 rpm. When the optical density (OD600) of the culture reached 0.5, it was harvested and centrifuged at 3000g for 10 min. Subsequently, the bacteria were rinsed in defined medium (DM) twice and were finally suspended in 300 ml of DM with lactic acid as carbon source in a 1000 ml flask. The final culture was left at 30 ⁰C and 150 rpm to grow until OD600 reached 0.1, and then harvested as test medium.

SIGRADUR® G glassy carbon plates (HTW Hochtemperatur-Werkstoffe GmbH Inc, Thierhaupten, Germany) were used as the anode material. A Buehler EcoMet® 3 Grinder-Polisher was used to create spatially uniform roughness of the orders of magnitude of 10s of nm and 100s of nm on two separate anodes. Scanning electron microscope (SEM) was used to show the surface topography of the two different anodes and atomic force microscopy (AFM) was used to quantify the roughness of the two anodes.

A three-electrode system with graphite as the counter electrode and Ag/AgCl as the reference electrode was used (Fig. 1) and the electrochemical behavior of each of the glassy carbon anodes (i.e. working electrodes) was monitored in-situ. Pure nitrogen was bubbled into the medium during the test to replace the dissolved oxygen in the medium. A ModuLab system (Solartron Analytical, AMETEK Advanced Measurement Tehnology Inc, Oak Ridge, TN) was used as the potentiostat to measure the electrochemical performance of the anodes via the following measurement methods: potentiostatic, potentiodynamic, electrochemical impedance spectroscopy (EIS), and cyclic voltammetry (CV). 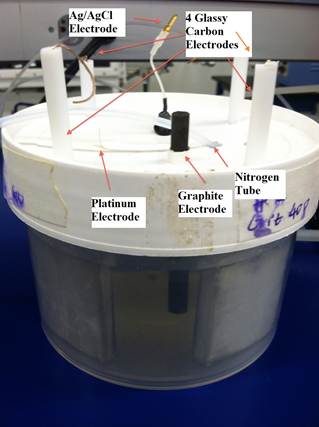 The anodes were gently removed from the three electrode system and were subsequently submerged into 2.5% glutaraldehyde at 4 ⁰C for 2 h. The samples were then gently rinsed in deionized (DI) water and  dehydrated in 20%, 40%, 60%, 80%, and 100% ethanol solution. The samples were air dried for 24 hours before SEM imaging. 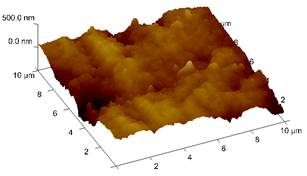 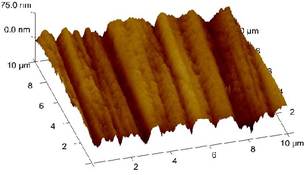 Our experimental findings indicate that anode surface roughness can significantly affect the electrochemical performance of MFCs. We have demonstrated that there is a substantially larger biomass growth on a rougher anode surface, which contributes to better performance of the anode. Results from this work can be used towards development of anodes with optimal surface topographical features for a better electron transfer rate and an improved power density.