In vitro testing platforms are one of the particularly promising approaches to characterize the dynamic roles of biophysical and biochemical cues on cellular growth, development, and behavior.  Numerous studies have shown that mechanical stimuli in a cell's external environment can have a profound effect on migration, proliferation, differentiation, and apoptosis.  Nanoscale topographical features have been shown to not only increase migration and directional persistence time, but also decrease proliferation in human endothelial cells [1].  Additionally, it has also been shown that mesenchymal stem cell differentiation can be influenced using custom topographical and geometric cues [2,3].  In addition to topographical cues, the stiffness (measured in N/m2) of the commonly used flat substrate used for cell studies has been shown to have a significant effect on cellular migration and differentiation.  As little as a four kilopascal change in stiffness can elicit significant changes in cellular proliferation, migration speed, and differentiation in both single cells [4] and confluent sheets [5].  However, flat substrates do not exhibit many of the fiber specific qualities that cells encounter when interacting with the native extra cellular matrix (ECM), which is a three dimensional, dense, fibrous mesh immediately surrounding the cell.   Cells on the ECM fibers attach, spread and eventually migrate with the fiber beam stiffness (measured in N/m) playing an integral role in cellular behavior.  Furthermore, it has been shown that the mechanical properties of the extracellular matrix are tissue-specific, and these different properties can dictate migration speed, cell's ability to remodel the ECM, and many other important cellular behaviors [6,7].  Hence, it is obvious that the mechanical properties of the ECM, especially stiffness (both modulus and beam stiffness), have an important role in the life and behavior of cells within the body.  However, creating a mechanistically tunable system to easily explore these properties is a challenging task due to lack of understanding regarding cell-ECM relationships and difficulties to fabricate precise nano-micro fibrous scaffolds of native proteins mimicking the native environment.

In order to explore this relationship between cellular activity and fiber substrate, a novel testing platform is presented in this study.  Using a combination of the previously reported STEP (Spinneret Based Tunable Engineering Parameters) fiber manufacturing platform [8-11] with soft-lithography based micron scale PDMS pillars, we explore the link between cellular behavior and fiber beam substrate stiffness.  The importance of this study lies in the unique ability of the STEP platform to provide precise control over fiber diameter and spatial deposition, thus providing a tunable mechanistic environment to explore cellular behavior.  Current studies using electrospinning platforms have been used to study cell behavior on a collection-mat of fibers. However, single cell-fiber studies using electrospinning platforms are hard to accomplish due to lack of control on fiber alignment, spacing and diameter. [12] In this study, the role of substrate fiber beam stiffness (N/m) on cellular behavior, particularly migration, is envisioned to provide new insights into the dynamics of cellular polarizability, focal adhesion complex and cytoskeleton arrangement, and cellular mechanics as a whole.

Standard photolithography practices were used to create SU-8 2025 (Microchem) molds for the fabrication of micropillars.  In short, the SU-8 photoresist was spun onto a 4 inch diameter silicon wafer (University Wafers), prebaked, exposed using a mask depicting pillar size and placement, and then developed using SU-8 Developer (Microchem).  Molds were silanized and then coated with Sylgard 184 PDMS and cured at 80oC for 1 hour.  The thin PDMS films with attached pillars were then “glued” to glass substrates using uncured PDMS as an adhesive, and then were cured again at 80oC.  Deposition of single nano-scale polystyrene (PS 8% w/w) fibers was performed using the previously reported STEP technique, ensuring even spacing and homogenous fiber parameters.  A small amount of epoxy adhesive was used to ensure fixed boundaries at each end of the fibers.  Scanning Electron Microscope (SEM) images were taken to verify fiber homogeneity and fixed boundaries (Fig 1).  C2C12 Mouse Myoblast cells were seeded onto the fibers and migration was characterized using time lapse microscopy (Fig 2(A)).  After time lapse studies were completed, samples were immunostained for F-actin stress fibers, nuclei, and focal adhesions.  Scanning electron microscope images were also taken of some samples for complete characterization of micropillar and nanofiber geometry.

Overall, cells were largely observed to migrate away from the center of the fiber, where fiber beam stiffness is lowest, with average migration speed decreasing near the edges of the fiber, where fiber stiffness is the highest (Fig 2(B)).  Suspended fibers were characterized for stiffness using an Atomic Force Microscope.  Preliminary data has shown that fiber stiffness is highly variable along the length of the fiber (Figure (2(C)).  Cells were observed to attach to single fibers and elongate along the fiber axis with immunostaining studies showing that focal adhesion sites concentrated at the poles of the cells with a higher level of focal adhesion at the leading edge of the cell.  F-actin stress fibers were found to be localized along the periphery of the cell with a higher concentration at the leading edge of the cell.  The nucleus was found to be stretched along the fiber axis and enclosed within stress fibers (Fig 2(D)).  This phenotype suggests a high level of polarizability of cells on the single fibers, with migration occurring in a single direction until an external stimuli (decreasing fiber beam stiffness) causes a change in direction. Quantification of the leading and trailing edge spatio-temporal dynamics is of immense interest and part of our future efforts. 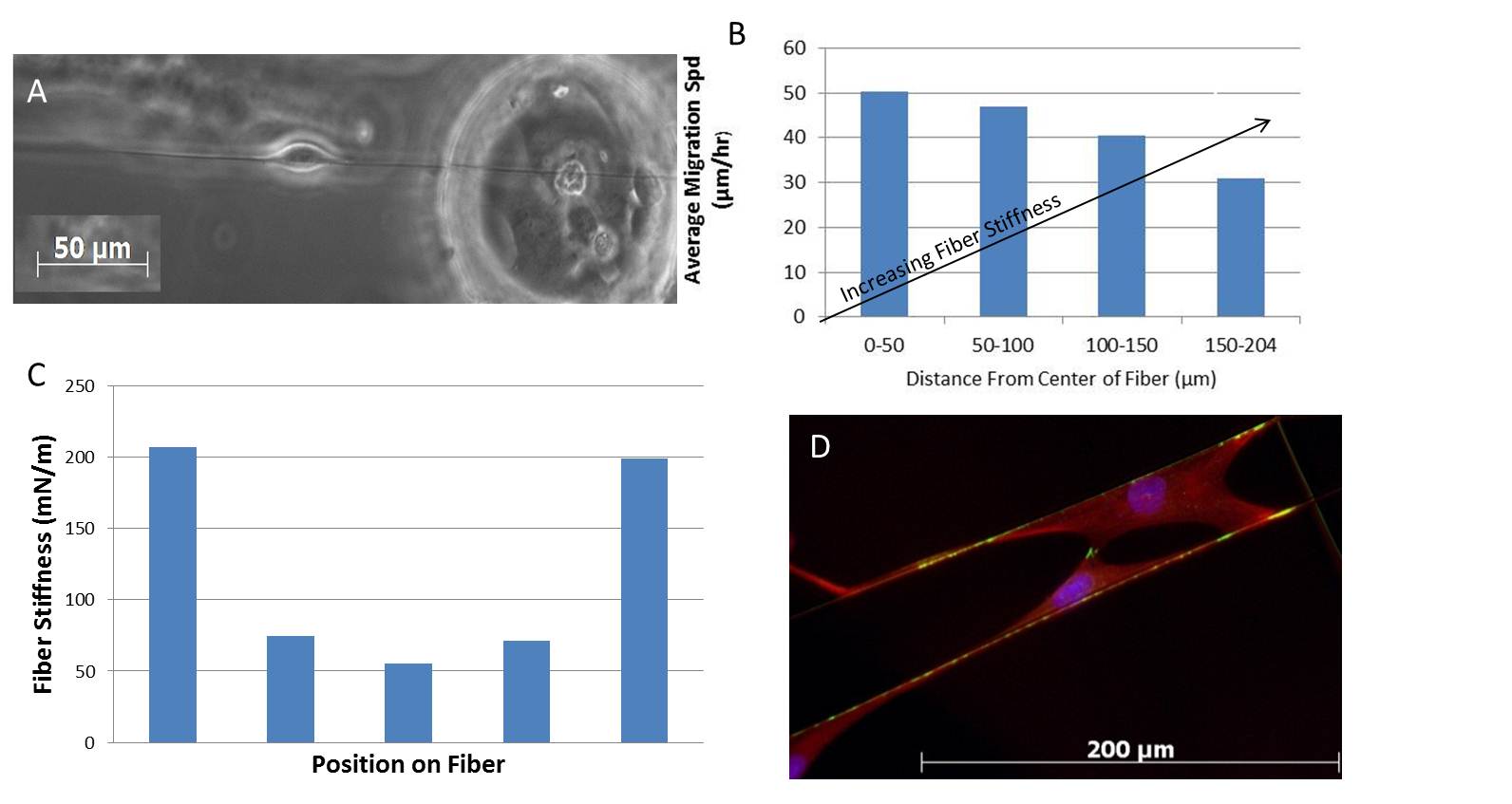 Figure 2:  A) Phase image of a cell traveling along a single fiber.  B) Average cellular migration speed as a function of distance from the center of the fiber (where stiffness is lowest) C) Average fiber stiffness along the fiber.  Stiffness dramatically increases near the pillars  D) Immunostained image showing f-actin (red), nuclei (blue), and focal adhesions (green)

The complete characterization of the influence of fiber substrate stiffness on cellular migratory behavior will be an important step in understanding many complex processes occurring within cells.  The use of the STEP technique with simple photolithography techniques provides suspended single fibers that mimic single ECM fibrils in order to provide conditions that are as similar to in vivo conditions as possible.  This technique allows for accurate measurement of cellular migration while maintaining simple, low cost fabrication as well as the possibility of modification to mimic the natural microenvironment of cells in various conditions.  Cells attached on single suspended fibers were observed to preferentially migrate towards the stiffest region of the fiber with migration speed decreasing with increase in substrate stiffness.  Additionally, immunostaining showed a high level of polarization and organization of F-actin stress fibers along the fiber axis.  The complete characterization of migratory behavior on this combined system will allow for a more complete view of the in vivo interaction of cells with the extra cellular matrix and it's relation to cellular mechanics as a whole, which will be invaluable in the design of accurate wound healing scaffolds, drug testing platforms and design of accurate tissue engineering scaffolds.