The integration of a Pd-based membrane within a catalytic reforming reactor to produce hydrogen has received much more attention during the last few decades [1].  In addition to being permselective to hydrogen, Pd-based membranes are capable of maximizing the conversion of thermodynamically-limited reactions, such as the steam reforming of methane, beyond the equilibrium conversion based on the feed composition, by simply withdrawing the hydrogen from the reaction mixture as it forms.  However, there are still some issues that prevent this technology from being fully commercialized, such as the long term thermal stability and the chemical tolerance of these membranes in real-world mixed gas environments.

In this paper, long term high temperature stability data for a 5.1 micron thick sequentially plated PdAu10wt% membrane prepared by the electroless plating method on a porous-zirconia/porous-stainless-steel support will be discussed.  The membrane has been tested for approximately 1000 hours and showed superior thermal stability at 500°C and below, in comparison to similar pure Pd membranes. The membrane also maintained an ideal H2/N2 pure gas flux ratio of at least 1000 at 100 psig for more than 1000 hours of testing.  As shown in Figure 1, nitrogen leak did not grow significantly in the temperature range (450-500°C) during several hundred hours of testing.   Figure 2 compares the performance of PdAu membrane to a pure Pd of similar thickness at 500°C. Addition of Au to Pd enhanced the thermal stability of the membrane by reducing the leak rate by at least one order of magnitude. Additionally, by comparing the leak rate of this PdAu membrane with the results of Guazzone, et al. [2] for a pure Pd membrane of comparable thickness, the leak growth rate in the PdAu membrane is also lower by at least one order of magnitude.  The calculation of the activation energy of the leak growth rate in Pd-alloy membranes and comparing it to the Pd self-diffusion activation energy could give some insights in revealing the leak growth mechanism in these membranes. 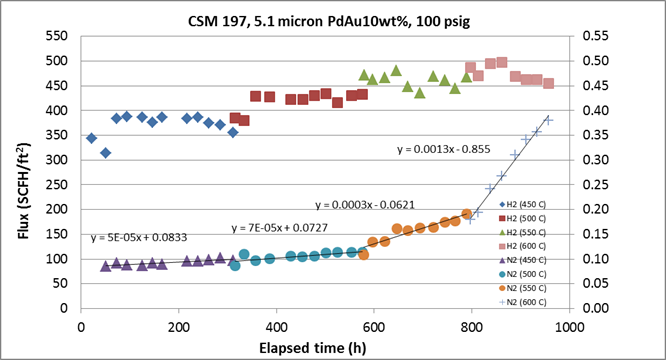 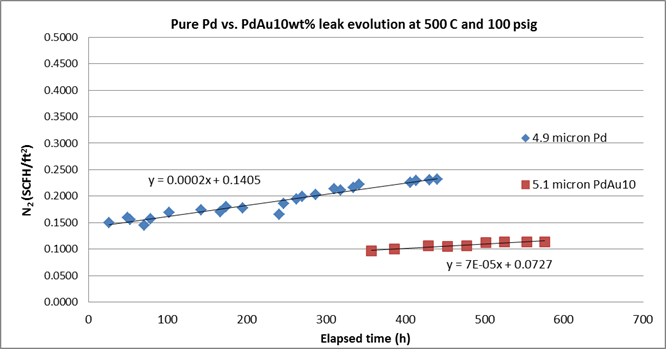 Figure (2): A comparison of the thermal stability data of a PdAu10wt% and a pure Pd control at 500 °C, 100 psig.  Both Membranes are of comparable thickness.