Adhesion of bacteria to surfaces is the starting point for formation of biofilms, which tend to be significantly less responsive to antibiotics and antimicrobial stressors, compared with planktonic bacteria. Nosocomial infections are the fourth leading cause of death in the U.S. with 2 million cases per annum [1]. About 60–70% of the reported infection cases are associated with implanted medical devices [1]. Thus, there is a compelling need for new anti-biofilm biomaterials to effectively minimize bacterial adhesion and colony formation on biomedical surfaces. The physicochemical properties of natural anti-biofilm surfaces of marine organisms are being actively studied to develop bioinspired anti-biofilm strategies. It has been shown that majority of natural anti-biofilm surfaces have well organized micro/nanoscale surfaces features. The work presented here aims to advance the current understanding of the role of surface features in cell-textured surface interactions with the ultimate goal of developing an anti-biofilm design framework based on topographical cues. 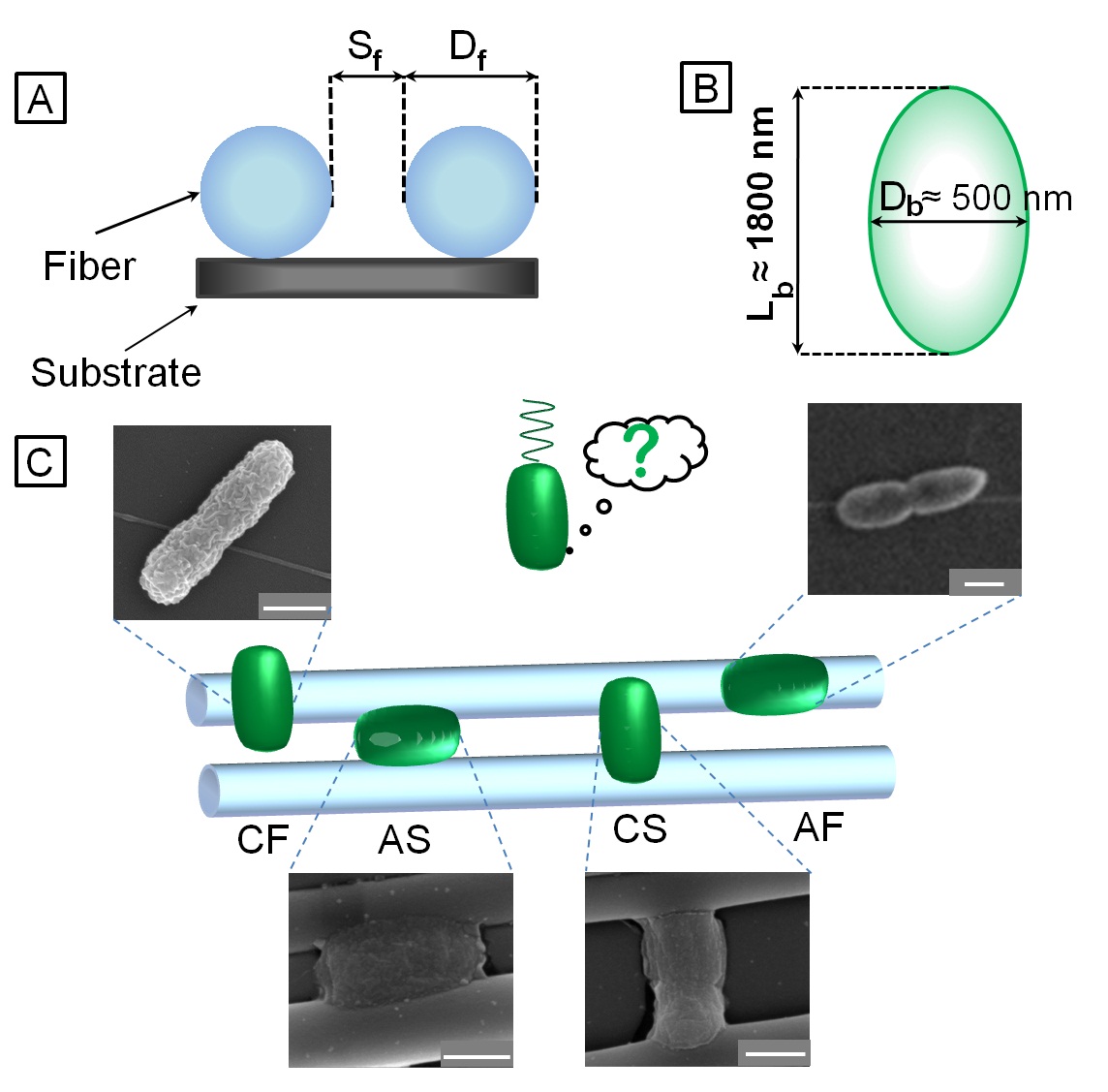 Figure 1: The illustration of the geometrical parameters of A: fiber and B: bacteria. C: Four dominant modes of the rod-shaped cell-fiber interactions. All scale bars in the SEM images represent 500 nm.

Static retention assays were conducted by placing triplicates of each surface in a suspension of P. aeruginosa bacteria in phosphate buffered saline (PBS) with the starting optical density, OD600nm = 0.3 for 2.5 hours at 37 oC. In all assays samples were suspended horizontally and face-down to eliminate the effect of gravitational sedimentation.

Four dominant modes of interaction between the bacteria and the parallel nanofibers were identified as follow (Figure 1-A3): CF (crossed the fiber), AS (aligned with the spacing), CS (crossed the spacing), and AF (aligned with the fiber). Scanning electron microscope (SEM) imaging was utilized to quantify modal density of adhesion of bacteria (number of bacteria/fiber length) for each mode of adhesion for all 12 possible combinations of Df and Sf. For each combination of the fiber diameter and spacing, the total density of adhesion was calculated as the sum of the four modal densities. The statistical differences between different situations were analyzed using one way ANOVA followed by Tukey test.

The results demonstrated the presence of a minimum experimental total adhesion density which occurs for samples with MD fibers at spacing less than the bacterial diameter (Fig. 2). Comparing to the bare surface this geometrical combination reduces bacterial adhesion by 40%. Additionally, our experimental results show that bacteria developed microcolonies (onset of biofilm formation) on the bare samples while the engineered surface inhibited colony formation.

Figure 2. Distribution of the total adhesion density of bacteria to the PS nanofiber textured surfaces as a function of fiber diameter (Df) and spacing (Sf).

Modal adhesion density data disclose strong similarity between bacteria - surface interactions and vesicle– surface interactions. When a vesicle comes in contact with a rigid surface, it deforms. Its final shape and state of the adhesion could be predicted by minimizing the total free energy of adhesion: Total free energy of adhesion (DGtotal) = Gain in adhesion energy (DGA) – Cost terms arise from the energy required for deformation (DGD) which can be attributed to different sources such as the curvature energy associated with the bending the membrane, tension energy associated with increase of the surface area, and the pressure energy associated with increase in volume.

Here, we use this concept to interpret our experimental results on the interaction between the rigid cylindrical particle (fiber) and the cylindrical vesicle (bacterium). For example, our experimental results for the AF mode show that regardless of the spacing between two fibers, this mode was never observed for MD fibers. Based on the aforementioned thermodynamic principles, this observation can be explained as reducing the fiber diameter increases the local curvature and consequently the cost of deformation, resulting in weak adhesion or desorption of the vesicle [3]. We observed adhesion in the AF mode for the LD fibers and not for the MD fibers, because the lower curvature of the LD fibers results in lower cost of deformation compared with the MD fiber. The AF mode was also observed for the SD fibers because the small diameter of SD fibers makes it possible for bacteria to interact with the flat substrate underneath the fibers and gain energy by adhesion to the flat substrate along sides of the fiber, as shown in the SEM image of the AF mode in Fig. 1. 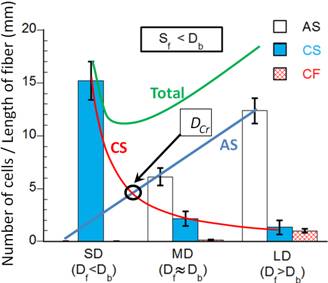 Figure 3. Effect of the fiber diameter (Df) on the modal density of adhesion for Sf < Db. AS, CS, CF are the modes of adhesion illustrated in Figure 1. AF mode attachment density is insignificant and is not included in the figure.

Following the above energy-based analysis, MD fibers are less favorable than LD fibers because they provide less contact area and also increase the cost of adhesion. Adhesion to SD fibers in CF mode is favorable as it supports adhesion to the flat substrate underneath the fiber which leads to energy gained due to adhesion. For separation distances less than bacterial diameter (Sf < Db) the MD fibers support bacterial adhesion less than SD fibers since they prevent direct contact of bacteria to

We have utilized nanofiber-textured model surfaces to study the effect of topographical feature size, spacing, and local curvature on the adhesion of bacteria at single cell level. We have experimentally demonstrated the presence of an optimum antifouling topographical geometry. The thermodynamic principles governing the vesicle-rigid surface interactions were used to interpret the experimental data. A systematic design methodology for empirical determination of the optimum antifouling topographical condition for nanofiber textured surfaces is outlined using an energy-based approach. We conclude that an appropriately designed local curvature of surface topographical feature is not only able to reduce the gain in adhesion process by providing less available binding sites (in all possible adhesion modes) but also through increasing the cost of deformation. In future, we plan to utilize the STEP fiber manufacturing platform to generate multi-scale assemblies of controlled topographical features on surfaces in order to repel microorganisms of different sizes.