Introduction: Glyosyltransferases are a family of about 200 enzymes that constitute ~1% of the human genome. By catalyzing the attachment of complex carbohydrate chains on protein scaffolds, members of this enzyme family post-translationally modify a majority of mammalian proteins. The binding of leukocyte borne, glycosylated selectin-ligands to E-, P- and L-selectin expressed on vascular cells plays a critical role in regulating inflammation. The α1,3 fucosyltransferase (FUT) family of enzymes has three members called FUT4, 7, and 9 that potentially contribute to the formation of sLeX type glycans on various selectin-ligands, including P-selectin glycoprotein ligand-1 (PSGL-1) in humans. While much of the data regarding FUT function in selectin binding has been found through use of transgenic mice knockouts, specifically the Fut4-/-Fut7-/- dual knockout which completely removes binding to all selectins, important species specific exist in selectin function in humans and mice, particularly in E-selectin.

Materials and Methods: For the over-expression studies, full length FUT fusion proteins with C-terminal EGFP tag were expressed in the mammalian Golgi of HEK293T cells. Their function was 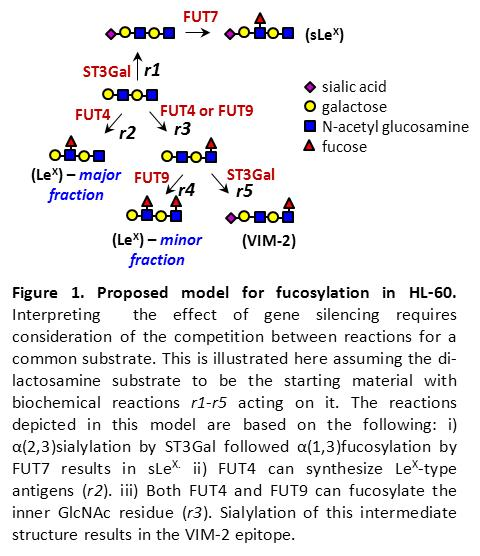 verified using enzyme activity assays and immunocytochemistry. The PSGL-1 scaffold was co-expressed in these cells and its effect on leukocyte adhesion function was determined using microfluidic flow cells with substrates bearing L-/E-/P-selectin.

For the RNAi assays, shRNA sequences that reduce by >85% each of the α1,3 FUT activities were determined. This was done by transducing FUT specific shRNA and monitoring reduction in EGFP signal associated with the corresponding FUT-EGFP cell lines. Results were validated using quantitative RT-PCR. Once identified, shRNA were co-expressed with either DsRed or Cerulean and packaged into lentivirus. Suitable promoters were then determined to drive high levels of gene expression and RNA interference in HL-60 cells, a human leukocytic cell line. Stable HL-60 cells lacking either one, two or all three of the FUTs were then constructed. The ability of these FUT knockdowns to modify selectin-dependent cell adhesion function was assayed using flow cytometry and microfluidic assays and compared directly in our system to neutrophils from Fut4-/-Fut7-/- mice.

Microfluidic based rolling studies compared the rolling and attachment to E-/P-/L-selectin for bothe the HL-60 FUTŸ cells and Fut4-/-Fut7-/- mouse neutrophils run in parallel. In complete agreement with the Fut4-/-Fut7-/- neutrophils, FUT7 and FUT4 co-mediated attachment, rolling and adhesion on cell lines bearing P- or L-selectin in HL-60. This process was fully dependent on the KPL-1 binding epitope of PSGL-1. E-selectin was the most promiscuous selectin ligand with cell rolling studies on L-E Cells and IL-1β stimulated HUVECs demonstrating a role for all three FUTs (FUT9>FUT7> FUT4). KPL-1 blocking or PSGL-1Ÿ HL-60 only reduced rolling by 40%, suggesting at least one other E-selectin ligand on these cells was present. FUT9 played major role in E-selectin mediated adhesion as the FUT9Ÿ HL-60 reduced the number of rolling and adherent cells on E-selectin by >50% alone, >75 percent in tandem with FUT7, and >90% in the FUT4Ÿ7Ÿ9Ÿ HL-60. The role for FUT9 in human E-selectin binding highlights stark species-specific differences as rolling and adhesion was decreased >95% on E-selectin in the Fut4-/-Fut7-/- mouse neutrophils.

Conclusions: This study introduces novel molecular engineering tools to study both gain and loss of glycosyltransferase function in leukocytes and related cell adhesion function. To this end, data generated using these methods highlight a critical and predominant role for FUT9, in addition to FUT4 and FUT7, in the synthesis of ligands for E-selectin in human leukocytes. This is in contrast to the observation that all selectin binding function (including E-selectin) is lost in Fut4-/-Fut7-/- mouse neutrophils. Thus, we observe notable species-specific differences in FUT and E-selectin ligand function that may be considered during the design of anti-inflammatory therapies that target the selectins, PSGL-1, or fucosyltransferases.