Anode-respiring bacteria (ARB) are unique in their capacity to transfer electrons from organic substrates to a solid anode.  The result of anode respiration is an electrical current that can be used for various bioenergy applications including power generation in microbial fuel cells (MFCs).  An efficient MFC must have minimal potential losses at the anode, the cathode, or the electrolyte. The anode of an MFC presents an interesting challenge as it is composed of anode-respiring bacteria (ARB) catalyzing the oxidation of organic matter into CO2.  As a living catalyst, ARB form a porous biofilm that extends tens of micrometers.  Inside the ARB biofilm, concentration and potential gradients determine the current production by ARB.  Anode resistances can be categorized as those associated with (1) mass transport, (2) ARB intracellular metabolism, and (3) extracellular electron transfer (EET).  Although some efforts have been made to characterize these anodic resistances, their contributions to MFC potential losses are largely unknown.

Although anode potential losses can be measured with CV, they cannot be characterized individually.  Theoretical assumptions, such as those proposed by the Nernst-Monod equation, are the only tools available to further characterize resistances in CVs.  In order to address this problem of separating individual polarization losses, fuel-cell researchers rely on Electrochemical Impedance Spectroscopy (EIS).  EIS has been used extensively in measuring the polarization losses at the anodes and cathodes of solid oxide fuel cells.  A key feature of EIS is that it can help distinguish multiple processes contributing to polarization loss on a single electrode, if the characteristic frequency at which each process controls is different.  The use of EIS in MFCs has only begun to be explored, with the most notable studies being on characterizing total anodic, ohmic, and cathodic polarization losses during long-term operation (Borole et al., 2010) and in detecting shuttles produced by ARB (Ramasamy et al., 2009).

Our preliminary EIS analyses using G. sulfurreducens as model ARB seem to indicate that at least two anodic resistances can be resolved using EIS within typical frequency ranges (Figure 1).  The resistances we observed reveal very interesting properties of ARB's electron transfer.  The first resistance (exhibited at high frequencies) appears to be constant as a function of anode potential (not shown).  More explicitly, it acts as a linear resistance.  Enzymatic processes always have a sigmoidal response to potential; therefore, this resistance must be attributed to EET (e.g., nanowires acting as a linear resistor).  The second resistance is affected by anode potential (not shown) and follows a sigmoidal response, which is typical of enzymatic processes.  However, the response obtained from this second resistance is that of a Nernst-Monod sigmoid with n = 2, not n = 1.  Most researchers have assumed an n=1 for the Nernst-Monod fitting based on the fact that cytochromes carry out a one-electron transfer and are known to be key proteins in the EET pathway.  These results underscore that we need to revisit the n = 1 assumption for the Nernst-Monod equation.  If n = 2 for the Nernst-Monod curve, a two-electron transfer ultimately limits the flow of electrons to the anode.  This process most likely occurs within or before the electron-transport chain, in which a few reactions are known to have n = 2. Thus, we hypothesize that the second resistance observed in Figure 1 is attributable to an intracellular resistance, basically an energy loss within the cell.  If this is correct, EIS becomes a method to differentiate between EET resistances and intracellular resistances. 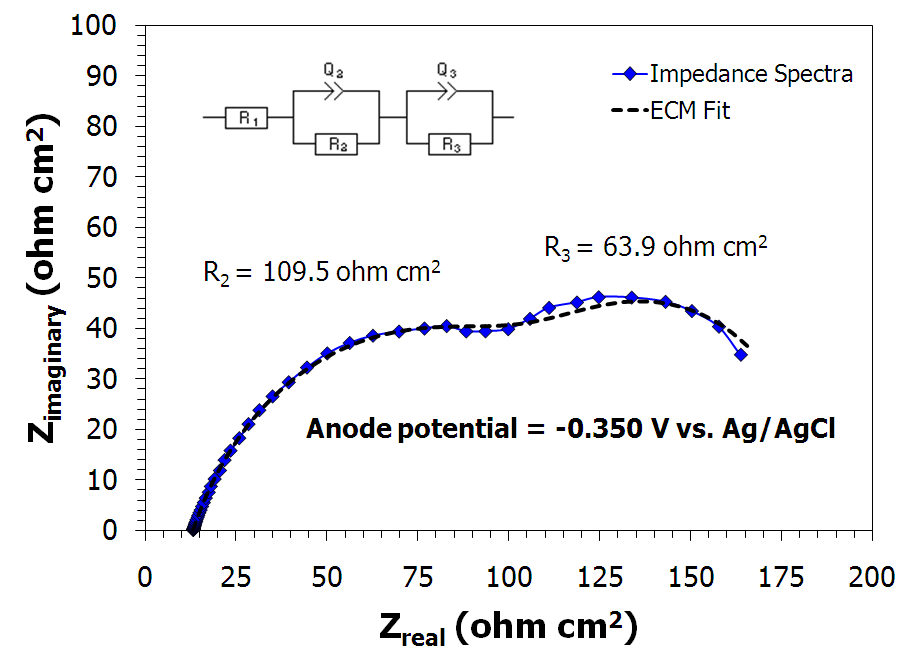 Figure 1.  Nyquist plots example of an ARB biofilm tested at -0.35 vs Ag/AgCl.