Calcium alginate entrapment of cells has been used extensively in cell culture for cellular and tissue engineering applications. We recently described a method to co-deposit and culture cells inside a calcium alginate hydrogel by means of a DC electric signal [1] that also allows for the study of intercellular signaling phenomena in a microfluidic device [2]. We report an advance that enables the site-specific genetic reprogramming of cells- introducing a plasmid into the cells by electrically-assisted chemical transformation as they are entrapped within the calcium alginate hydrogel. In addition, this system allows for direct optical access to the cells throughout the entire hydrogel, giving researchers a new level of control over cellular engineering experiments  and the delivery of nucleic acids to cell populations as well as the ability to study spatial distribution, migration, and responses of reprogrammed cells through the use of confocal microscopy.

The deposition of a small calcium alginate hydrogel containing an excess of CaCO3 enables the electrodeposition of a calcium alginate hydrogel that is free of CaCO3 particles, ensuring optical access to the cells throughout the entire hydrogel that was observed by transmitted light (Fig 1a) or fluorescence (Fig 1b). An optical density of the cells in the hydrogel was calculated by transmitted light (Fig 1c) and fluorescent protein production by the cells was monitored by fluorescence microscopy (Fig 1d). Confocal microscopy demonstrates this method is superior to previous methods [1, 2] by allowing optical access through the entirety of the hydrogel rather than the ~100 µm closest to the objective lens. Control experiments indicate cells are transformed by a synergistic combination of electric field, Ca2+, and Joule heating. IPTG can be used to induce protein expression at a desired time point, as demonstrated in Figure 2. Transformed cells were cultured and used to produce protein constitutively or selectively induced by environmental factors, effectively acting as sensors. The most exciting aspect of this simple, rapid, and reagentless technique is the site-selective reprogramming of cells as they are entrapped within a calcium alginate hydrogel, offering researchers both spatial and temporal control over the genetic makeup of cell populations within the cell culture environment.

E. coli cells have been genetically reprogrammed by an electric field-assisted chemical transformation mechanism while they are simultaneously entrapped and cultured within a calcium alginate hydrogel at an electrode surface. This process enables selective transformation of desired cell populations at a specific spatial location. Cell growth and fluorescent protein expression were easily monitored optically within the microfluidic device. Transformed E. coli can act as cell-based sensors of chemicals in the environment. This powerful and versatile method is currently being extended into the study of intercellular communication phenomena and is being adapted for eukaryotic cell lines such as Sf9 and HEK293, which are important to the biomedical engineering field for basic research, vaccine development, and therapeutic protein production.

Acknowledgements: This work was supported by a grant from the Robert W. Deutsch Foundation. 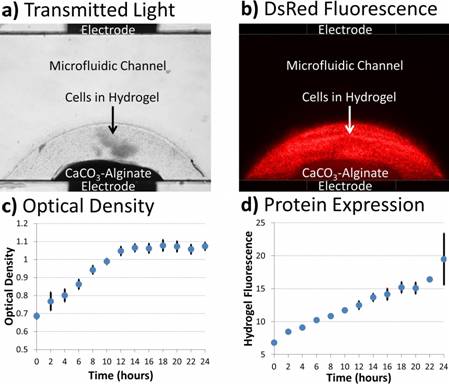 Figure 2. IPTG induction of DsRed expression in E. coli transformed during electrodeposition.  Protein expression is minimal until IPTG induction begins at 10 hours post transformation, at which point it begins to increase at a rate much higher than previously measured. 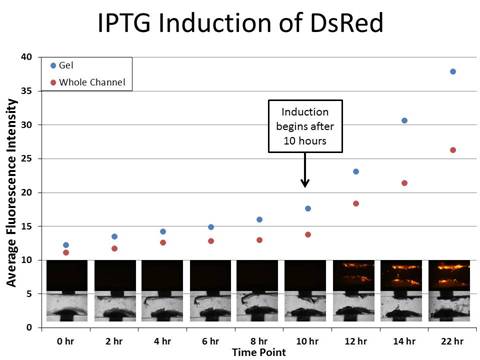