Coenzyme Q10 (CoQ10) exists in all body cells, and it is vital to a series of activities related to energy metabolism. Nowadays, CoQ10 is widely consumed by humans since it is well known as an important nutrient and a therapeutic agent in supporting health and as an inhibitor of ageing. Moreover, CoQ10 also has good effect in inhibiting the growth of human cancer cells. Human serum albumin (HSA) is the most prominent protein within blood plasma, and it plays an important role in the binding of many kinds of ligands, such as drugs. Due to its significantly physiological functions, HSA has been widely used as a model protein in evaluating protein¨Cdrug interactions.

So far, different spectroscopic approaches have been broadly used to detect the binding of protein with various of drugs. However, the interaction of CoQ10 with HSA has not been explored. Therefore, in this paper, UV-vis absorption, fluorescence and circular dichroism (CD) spectroscopies were employed to reveal the mechanism of the binding between coenzyme Q10 (CoQ10) and human serum albumin (HSA) under physiological conditions (pH=7.4). The binding parameters have been calculated by fluorescence quenching method. The results demonstrated that the fluorescence quenching of HSA by CoQ10 was mainly static quenching due to the formation of HAS-CoQ10 complex, and the number of binding sites (n) equal to 1. The thermodynamic parameters (DH = - 43.18 kJ mol-1, DS = - 47.05 J mol-1 K-1, DG = - 29.15 kJ mol-1) indicated that the enthalpy-driven binding process was spontaneous, and the main binding forces between CoQ10 and HSA were hydrogen bonds and Van der Waals forces. The competitive experiments using different site markers indicated that subdomains IIA (site I) of HSA was the primary binding site for CoQ10. The average binding distance (r) between HSA and CoQ10 was 4.29 nm, which was estimated according to the Forster's theory of non-radiation energy transfer. The CD spectra, UV-vis absorption and synchronous fluorescence spectroscopy data showed the slight conformational changes of HSA in the presence of CoQ10. 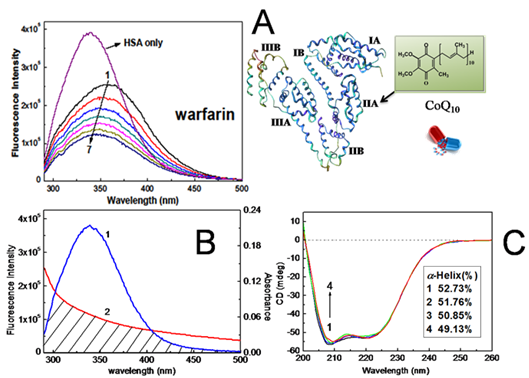 Figure (A) Binding site of CoQ10 in the HSA, (B) Energy transfer between HSA and CoQ10, (C) CD spectra of HSA in the presence of CoQ10.