Flavor esters have various applications in food, perfume, flavor and pharmaceuticals since their aroma qualities. Recently, application of enzyme in the synthesis of esters has aroused widely interests for its high efficiency, moderate reaction condition and environmental friendly. The enzymatic synthesis of esters was mostly carried out through the esterification between alcohols and acids. However, it usually obtained low yield due to the severe deactivation of lipase activity under the high concentration of acid [G¨ąvenç, 2002].The transesterification route using alcohols and esters as substrates could eliminate this problem. Vinyl esters are usually used as acyl donors in transesterification to obtain the higher conversion since the produced vinyl alcohol can tautomerize to acetaldehyde, which could promote the synthesis process. However, the co-product acetaldehyde has an unfavorable deactivation effect on lipase since it would bond to lysine residues by the formation of Schiff-base [Villeneuve, 2000]. Also, most of these lipase catalyzed reactions are carried out in the organic solvent such as n-hexane, heptane or toluene which are toxic and inflammable.

In this work, a commercial flavor ester, cinnamyl acetate, was synthesized by lipase (Novozym435) through transesterification route in a solvent-free system (Fig A). Ethyl acetate was chosen as the solvent as well as the acyl donor instead of vinyl acetate in order to avoid the deactivation of acetaldehyde on enzyme. 90.06% of conversion was achieved after 3 h when the transesterification was carried out at ethyl acetate/cinnamyl alcohol=15:1, 2.67 g L-1 of lipase loading and 40oC (Fig B). The excellent stability and reusability of enzyme resulted from the moderate reaction system. The immobilized lipase can be reused at least 6 cycles with few decline of activity. Kinetic studies indicated that the reaction abode by the Ping-Pong Bi-Bi mechanism with the inhibition of cinnamyl alcohol on lipase (Fig C) .The Michaelis constant for ethyl acetate and cinnamyl alcohol were calculated as 2.241 mmol L-1 and 206.81 mmol L-1, respectively (Fig D). The inhibition constant of cinnamyl alcohol was 0.461 mmol L-1, and the maximum reaction rate was 41.807 mmol L-1 min-1. 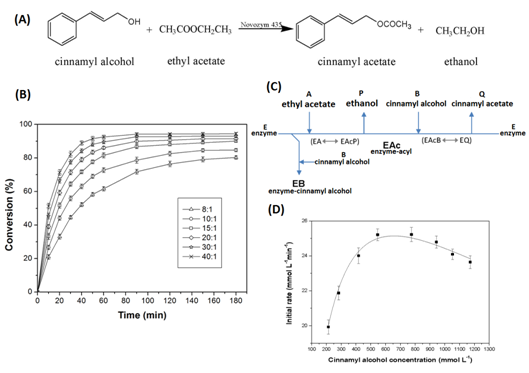