In the human body, cells attach to and receive biophysical and biochemical cues from their immediate fibrous microenvironment known as the extracellular matrix (ECM), which helps drive overall cell behavior.  Cells form attachments to the ECM through multi-protein complexes known as focal adhesions (FACs), whose size and orientation dynamics (spatial and temporal) adapt with changes in surrounding geometry1–3. Likewise, other aspects of the cytoskeleton including f-actin stress fibers, myosin IIa motors, and microtubules adjust according to the makeup of their extracellular environment and cooperatively interact to produce locomotive force against the ECM via FACs4,5.  While this phenomenon is well-understood on flat substrate conditions, recent work has shown that cell attachment profiles contain considerable differences when cultured on three dimensional fibrous substrates mimicking the native ECM6–8.  Using the STEP (Spinneret-based Tunable Engineered Parameters) platform, which generates fibrous scaffolds of high aspect ratio nano/micro fibers with tightly controlled diameters and spacing, we examine FAC behavior on ECM-mimicking scaffolds in both normal cells and cells with cytoskeletal knockdowns9–12.  By administering the drugs blebbistatin, nocodazole, and cytochalasin-D, cytoskeletal elements myosin IIa, microtubules, and actin are depolymerized respectively, causing notable changes to migration speed and FAC behavior on these scaffolds. The efficacy of these drugs in changing the FAC dynamics can be used for developing drug testing platforms, arresting cellular migration of metastatic cancerous cells and developing more effective tissue engineering scaffolds.

In addition to using flat glass substrates, suspended polystyrene (PS) fibers of approximately 500 nm diameter were spun onto hollow STEP substrates. Scaffolds were coated with fibronectin and incubated overnight prior to cell seeding using standard cell culture techniques. Seeded mouse C2C12 myoblasts attached to and spread on the fibers within 4-6 hours.  Cells on fiber networks were then time-lapse imaged using an incubating microscope (Zeiss) with a digitally-controlled X-Y-Z stage.  Cell migration speeds were calculated via time-lapse by tracking the position of the cell's nucleus every hour and noting the maximum distance traveled per hour in a 12-hour window.  Blebbistatin (50 μM), nocodazole (10 μM), and cytochalasin-D (5 μM) were added directly to media at typically-noted concentrations 6 hours after initial seeding and were time-lapse imaged immediately13.

Fluorescence microscopy was used to locate focal adhesion proteins as well as the f-actin stress fibers and cell nuclei.  Cells were fixed in 4% paraformaldehyde for 15 minutes at room temperature, permeabilized in a 0.1% solution of Triton X100, and then blocked in 10% goat serum for 30 minutes.  Primary goat antibodies against paxillin (Invitrogen) were diluted 1:250 followed by GFP secondary antibodies also at 1:250 to visualize FACs.  Rhodamine phalloidin was used 1:100 to stain stress fibers, and DAPI was used to stain the nuclei.

PS fibers of 500 nm diameter were deposited in single, parallel and orthogonal configurations with cells responding to change in orientation and topography accordingly (Fig.1A-C). After seeding cells on STEP scaffolds, cells were found to attach within six hours.  Immediately following this time, cells were treated with the drugs in aforementioned concentrations and then observed for changes to migration behavior and cytoskeleton arrangement.  As can be seen in Figure 1, migration speeds were found to vary according to both cell shape and administered drug. 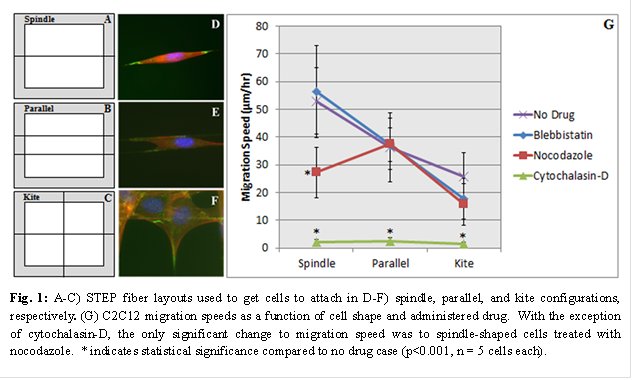 Spindle cells, which attach and elongate along a single fiber axis, form stable adhesion patches (~ 11 µm in length) at the cell periphery (Fig.1D).  Due to their high polarity, these cells are capable of migrating at high speeds (50+ μm/hr).  However, when actin is depolymerized with cytochalasin-D, the cell is no longer able to extend its membrane and form stable adhesion patches, which causes cells to be non-migratory. On the other hand, nocodazole, which depolymerizes microtubules, reduced spindle cell speed to approximately half the original value.  Since the cell no longer contains microtubules, this drug prevents the cell from splitting into daughter cells despite progressing through the cell cycle.  The end result is a more massive cell containing multiple nuclei which remains confined to the same attachment profile.  In theory, because the mass of the cell increases without any visible change to the FAC, migration speed decreases.  Lastly, blebbistatin-treated cells migrated at the same speed as the wild type cells.  In the absence of myosin IIa, cells are unable to sense the stiffness of the fiber matrix and thus do not develop mature adhesions.  These temporally unstable FACs ultimately allow the cell to maintain normal migration speeds.

Parallel cells were found on STEP scaffolds which contained fibers that were spaced relatively close together (<20 μm).  At this separation distance, the cells were often found spanning the gap between the two fibers and forming prominent adhesion clusters at the cell periphery – two per fiber for a total of four main clusters (Fig 1E).  Parallel cells migrated about 40 μm/hr.  Cytochalasin-D again stopped migration altogether.  Blebbistatin did not alter migration speed and the effect of nocodazole was dampened for this shape, most likely since parallel cells travel slower to begin with and have additional adhesion sites compared to spindle cells, which only have one fiber to elongate on.

Kite-shaped cells, which attach to intersecting fibers and form two adhesion clusters along each fiber axis, migrate the slowest of the three shapes at about 30 μm/hr (Fig.1F).  Again, cytochalasin-D stopped migration whereas blebbistatin and nocodazole did not significantly change migration speed.  Cells travel slower in this shape presumably due to the formation of four nearly equal FACs which each pull towards the cell center. 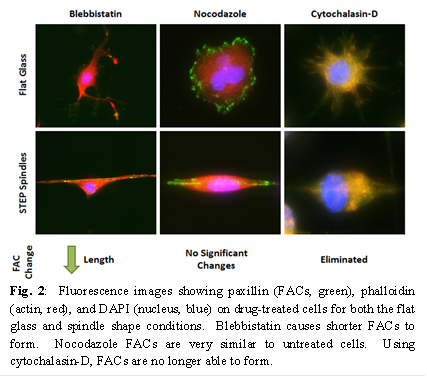 To further probe the effect of drugs on the cytoskeleton, cells were fixed and stained to measure changes in focal adhesion lengths, stress fiber formation, and nucleus positioning (Fig 2).  This was performed on both flat glass as a control substrate and on STEP fibers.  There were several notable changes to the structure of the cells that were treated with drugs which confirm changes seen in migration speeds.  First, blebbistatin-treated cells contained FACs that were significantly shorter than untreated cells.  This is likely due to the inability of the latent adhesions to mature by responding to the fiber beam stiffness (N/m). Cells exposed to nocodazole were frequently observed to contain multiple nuclei within the same cell body.  Since this drug depolymerizes microtubules, a structural component key to mitosis, the cell continued to progress throughout the cell cycle without forming daughter cells.  Despite this extra cell matter, FACs were essentially unchanged.  Lastly, cytochalasin-D treated cells contained no traces of actin or FACs whatsoever, confirming its significance in the cell migration process.

Using the STEP platform for fiber manufacturing, cellular migratory behavior and cytoskeletal arrangements were tracked for both normal and drug conditions.  While fluorescence images demonstrated definitive changes to cytoskeletal appearance and arrangements compared to the 2D case, overall migratory speeds were observed to remain constant with treatment of blebbistatin, and nocodazole only significantly affected spindle shaped cells.  Cytochalasin-D caused migration to stop altogether.  In these cases, changes to the cytoskeletal proteins caused subsequent changes to focal adhesion formation and function, especially compared to the traditionally-studied 2D cases. This information will be used in the future to further understand and predict cell motion based on attachment profiles with the hopes of designing structures to either speed cell migration for applications such as wound healing, or slow migration in cases such as metastatic cancer cells.