287090 Production, Purification and Characterization of b-Mannanase From Bacillus Subtilis TJ-101 and Its Application in the Preparation of Gluco-Mannooligosaccharides

b-mannanase (b-1,4-D-mannanmannohydrolase, EC 3.2.1.78) is an important hemicellulase, which can catalyze the hydrolysis of internal b-1,4-D-mannopyranosyl linkages in various b-mannan such as galactomannan, glucomannan, galactoglucomannan. b-mannanase has been widely used in the food, feed, paper and oil industries. In the food industry, b-mannanase is an excellent biocatalyst for the production of gluco-mannooligosaccharides (GMOS). Several studies have verified that GMOS with the degree of polymerization (DP) of 2~6 have the outstanding bioactivities on human being. For example, GMOS could increase the growth of intestinal microorganisms, decrease pathogenic bacteria and improve the integrity of intestinal mucosa [Zhang et al., 2009]. Among various microorganisms being reported as b-mannanase producers, Bacillus subtilis is recommended because of its safety, fast growth and the high secretion ability of b-mannanase [Jiang et al., 2006]. b-mannanase of Bacillus subtilis is an inducible and extracellular enzyme whose activity and production is greatly influenced by media components, such as carbon sources, nitrogen sources and metal ions. 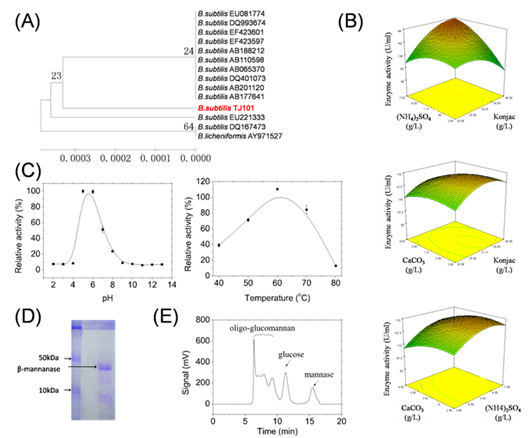