287045 Effect of Stretching On Transport Across the Stratum Corneum

EFFECT OF STRETCHING ON TRANSPORT ACROSS THE STRATUM CORNEUM

The SC consists of layers corneocytes, often considered impermeable, imbedded in an intercellular lipid bilayer matrix which is considered the main diffusion pathway for molecule transport through the SC. Young's Modulus (E; a measure of stiffness) for the SC is reported to be 420kPa1,whereas for an isolated corneocyte, E was found to be 450MPa2. Given that Ecorneocyte >> ESC, it is likely that the lipids will expand more than the corneocytes under applied strain. An extension of the SC is therefore hypothesized to increase the lateral surface area of the lipid bilayer. This indicates that the application of uniaxial strain should increase permeability and thus drug transport through the SC. 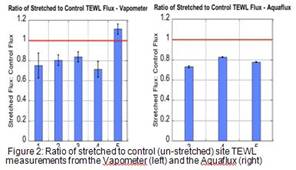 The cumulative amount of MPB was plotted against the cumulative amount of SC removed for the control and stretched sites of each participant. Slopes of this data indicate the MPB permeation rate. The ratio between the slopes of the stretched to control site were calculated for each participant (Figure 1) as a measure of the change in permeability. A permeability ratio that is greater than one (red line in Figure 1) indicates a higher permeation rate for the stretched skin. The ratio of the TEWL measurements between stretched and un-stretched skin are shown in Figure 2. The results indicate that the effect of mechanical stretching generally causes a decrease in both MPB transport and TEWL.

The current data in both studies does not account for the change in surface area between stretched and un-stretched skin. When skin is stretched the skin's natural folding decreases, causing the area of application to decrease. This reduction of area in contact with MPB during the tape stripping experiments could reduce the amount of relative transport. Using PRIMOS imaging equipment the surface profile was obtained in vivo using the stretching device for both stretched (40% strain) and un-stretched skin. A polynomial fit will be used to determine the change in surface area. This correction will be applied to MPB and TEWL to confirm or reject the original hypothesis.