The characterization of gas-diffusion layer (GDL) properties has been critical in understanding two-phase flow of water and gas within proton-exchange-membrane fuel cells (PEMFCs). In recent years, many studies of the capillary pressure versus saturation relationship for GDLs have been performed at room temperature. However, PEMFC operating temperatures are typically between 50C to 80C. Thus, the water-uptake studies to date may not be accurate representations of the water transport phenomenon within the PEMFC during operation. In addition, most other transport properties including permeability, thermal conductivity, breakthrough pressure, and surface adhesion forces are also only measured at room temperature.  In this talk, the impact of temperature (from ambient up to 80C) on these properties and system response will be discussed.

The GDL samples used were SGL 24AA and SGL 24EA. These samples have a PTFE loading of 0% and 30% respectively and a thickness of 0.19 mm. Water-uptake measurements were conducted to measure the capillary pressure – saturation curve in a setup and methodology developed by Gostick et al.1 The experiments were conducted at 25C, 60C and 70C in an environmental chamber. Humidity was also varied from 0% to 90% but showed no measurable effect; thus, humidity was maintained at 50% for all temperature studies. Figure 1 and figure 2 show the capillary pressure- saturation curves for SGL 24AA and SGL 24EA, respectively. As temperature increases, the residual saturation also increases. This is to be expected since the surface tension of water decreases as temperature increases. Thus, at higher temperatures, water does not adhere to itself as well as it does in lower temperatures. This allows for the formation of more disconnected water pathways within the sample and hence, the residual saturation increases as temperature increases. The contact angle of water on the sample also varies as a function of temperature, and the surface adhesion force at higher temperatures was measured using a sliding-angle technique.2 At higher temperatures, the sample becomes more wetting (or more hydrophilic). This is evident in our data by noticing the shift towards the negative capillary pressure as temperature is increased. From the Young- Laplace equation, the pressure difference resulting from the temperature changes can be calculated. For our temperature range of 25C to 70C, the corresponding pressure differences are -14 Pa and -12 Pa respectively.  Comparing the SGL 24AA and SGL 24EA, it is evident that the overall net effect of temperature change (increase in residual saturation and increase in wettability) is greater for SGL 24AA. This is explained by the presence of more exposed carbon within the 24AA sample (no polytetrafluoroethylene content) which oxidizes at higher temperatures, in agreement with ex-situ-aged sample results.2

In addition to adhesions force and capillary properties, the permeability and thermal conductivity of the samples were measured at various temperatures. The determined relationships were fit and used in a sample two-phase flow model to predict the changes due to temperature on liquid versus vapor transport through the GDL.

This work was funded by the Assistant Secretary for Energy Efficiency and Renewable Energy, Fuel Cell Technologies Program, of the U. S. Department of Energy under contract number DE-AC02-05CH11231. 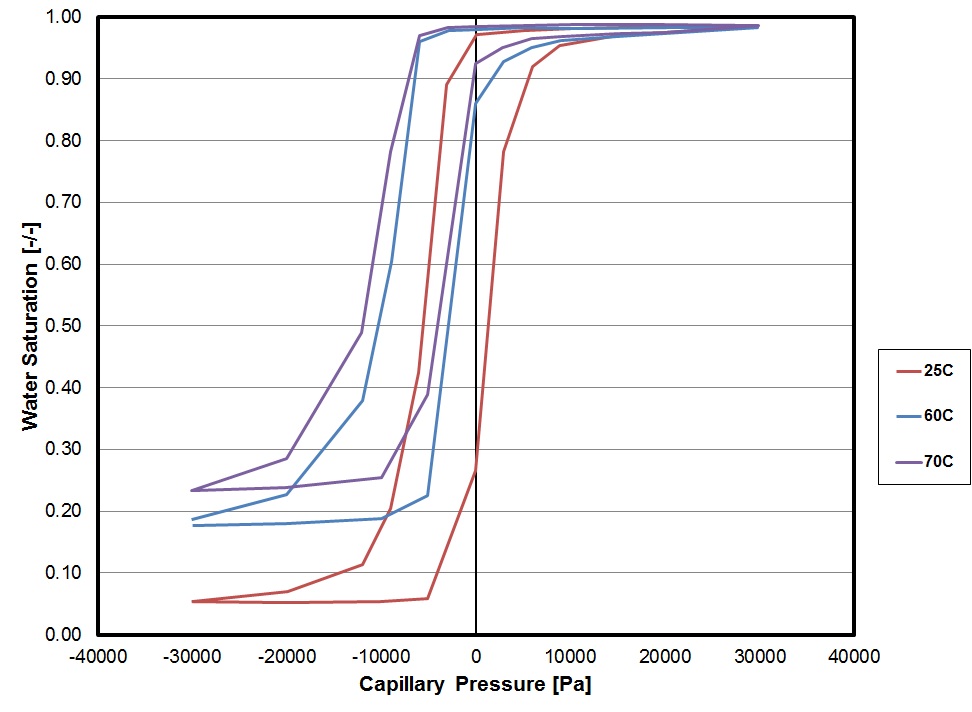 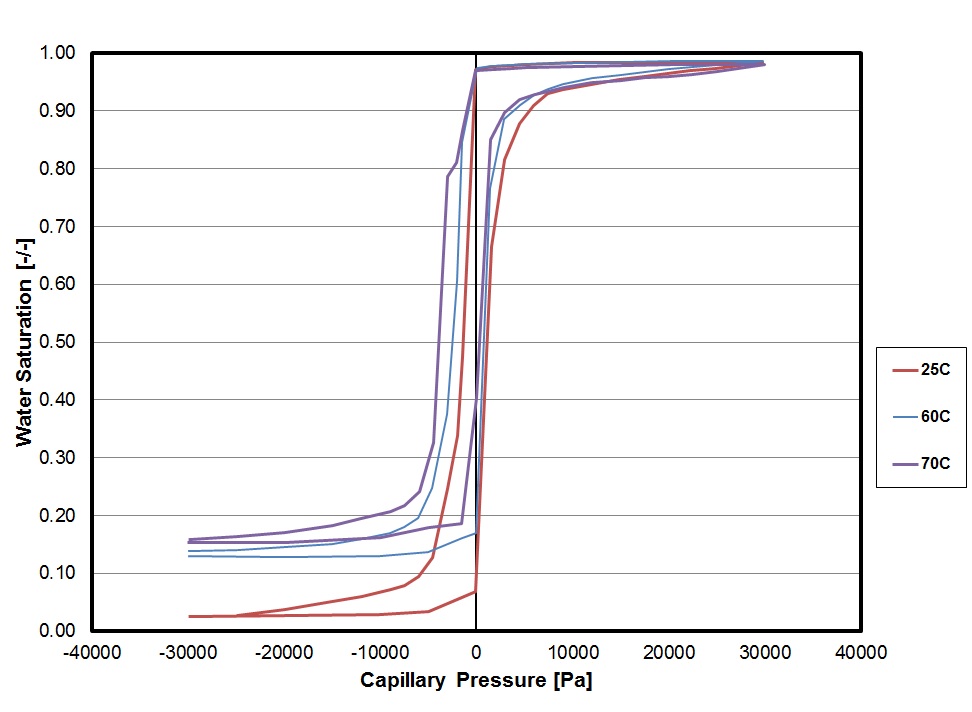