The body has a natural process to heal wounds or breaks to the skin surface. This process known as wound healing is a complex sequence of events that are broken down into inflammation, tissue repair and tissue remodeling. [1] Depending upon the severity, this process can take a few days or months to heal and even after healing the skin may never regain its original strength [2]. Much work has been done through wound healing assays to understand wound repair, specifically trying to enhance our current knowledge in cell polarization, matrix-remodeling and cell migration in an attempt to optimize the wound healing process. [3]

New biopolymers and fabrication techniques are being constantly explored as a means of enhancing this natural process with the ultimate aim of decreasing healing time while maintaining the native aesthetics. Current wound healing strategies based on fibrous networks try to maintain an ideal environment to facilitate cell regeneration without causing further damage to the wound or patient. [4] However, a limitation to these techniques is their lack of ability to obtain high levels of alignment and much work has been devoted to creating highly aligned polymeric fibers for wound healing, specifically with electro-spinning. [5][6] 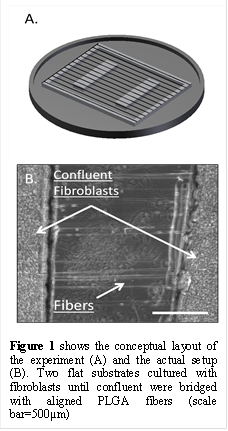 With advancement in fiber deposition platforms, it is now possible to deposit fibers and fabricate scaffolds of a variety of polymeric systems of different length scales mimicking the native extra-cellular matrix (ECM) upon which cells can be seeded for wound healing.  Our previously reported STEP (Spinneret based Tunable Engineered Parameters) platform is uniquely suited to fabricate biomedical scaffolds, as it provides superior control on fiber dimensions (diameter: sub 100nm –micron, length: mm-cm, spacing: sub-micron-microns) and deposition (parallelism ≤ 2.5 degrees).[7][8][9] Using this technique, we developed a new wound healing assay for analyzing the wound healing process. In this study, biophysical cues, specifically alignment and geometry are analyzed for their effect on wound closure. Specifically, poly-lactic glycolic acid (PLGA) aligned fibers are deposited between two confluent 3T3 monolayers mimicking a scratch test (Fig 1). We envision that understanding these cues will allow for the design of new sutures and the development and enhancement of wound healing devices.

Polymer solution of 3%(w/w) PLGA dissolved in Chloroform was prepared and spun using STEP technique to achieve deposition of highly aligned uniform suspended fibers (app. 400nm diameter).  Scaffolds were coated with fibronectin to improve cellular adhesion. Two plastic coverslips were seeded with NIH3T3 fibroblasts and cultured in DMEM for several days until a monolayer formed covering the entire plastic surface. The PLGA suspended scaffolds were then applied to the flat substrates to bridge the gap between the two separate monolayers shown in Figure 1.  Time-lapse microscopy was started once cells from the monolayer began migrating into the gap now bridged by the nanofibers.  These fiber scaffolds were imaged for approximately a week until a confluent layer of cells covered the entire fiber scaffold.

With fiber implementation, Figure 2a, three major stages of wound closure (axial and lateral migration, and fiber gap closure) were observed depending on cell confluency.

Axial Migration: First, cells from the stationary monolayer (confluent) began to accelerate out at an average speed of ~50um/hr onto the (nonconfluent) fibers shown in Figure 2b. Each subsequent cell following the leading cell generally showed a decreased migration velocity and were found to be attached to trailing cells. The leading migratory cells as they reached the center were unstable, frequently changing its polarization and speed. However whenever individual cells came into contact with dense trailing groups of cells (along the advancing boundary), they migrated toward the less confluent area. Over the next 48 hours, the cells completely covered the fibers and migration along the fiber was inhibited by the high cell density, leading to lateral migration.

Lateral Migration: The cells continued to migrate along the fiber axis but with no room to attach to the actual fibers, the cells began to migrate outwards and along the inner attached cells. With a confluent fiber, the outer cells were no longer directly attached to the fiber but to its cell neighbor, stacking as many as three cells in either direction of the fiber. This stacking was found to be higher along junctions between the fiber scaffold and the confluent boundary leading to fiber gap

Gap Closure: Migrating cells closed the gap between the suspended fibers by utilizing the perpendicular intersection between the fibers and the confluent boundary. Interestingly, cells were observed to continuously bridge the corners of the intersections leading to filling of gaps between fibers. This process was capable of closing fiber gaps as large as 100 microns shown. In Figure 2c, the white arrows show the migration of cells in between the fibers only supported by neighboring cells. The speed of this gap closure was found to be a function of fiber separation. In the case of large fiber separations (100 microns or more) the cell boundary only at migrated about 2 microns per hour requiring many cells to be recruited before the growth could continue to advance. However, as fiber separation decreased, migratory speed increased exponentially where fibers separated by 20 microns or less could be bridged by single cells without support and closed the gap at 40microns/ hr. Within a week, almost all the fiber gaps were completely closed and are shown in Figure 2d.

STEP enabled wound closure model reveals fibroblast behavior in the wound healing process based solely on biophysical cues. . The confluent boundary represents the healthy tissue along the edges of a wound. With the implantation of aligned fibers onto a wound, the healthy tissue was able to cells into the wound as shown by the fibroblast migration. The wound healing process leading to wound closure was found to be dependent upon cellular axial and lateral migration. The aligned fiber migration wound healing scaffold provides the importance of biophysical cues and when coupled with biochemical cues opens new directions in design of wound healing strategies.