In this paper is analyzed the performance of two process equipment where the most significant changes occur in the quality of treated water, from a pilot wastewater treatment plant (WWTP) in a cans manufacturing process plant.

In the first stage of this treatment process, coagulation and flocculation have been used to remove total hardness and total suspended solids, primarily.

In a second step of this treatment process, a reverse osmosis (RO) system has been used to remove total dissolved solids (TDS) and silicon oxide mainly. This plant which manufactures cans for beverage packaging, is located south of the Mexican Republic.

In this research, the studied wastewater was generated by a can making plant and its raw water contains significant quantities of TDS, suspended solids and grease. It leads to high values of conductivity, hardness, silicon oxide, and COD; for these reasons this wastewater must be treated before its discharge to water bodies or reuse the treated-wastewater, leading to increase the water reuse rate.

A pilot scale plant with a capacity of 0.9084 m3/h (4.0 gallons per minute, gpm) was built to treat the studied industrial effluents. Its flowchart is shown in Figure 1. 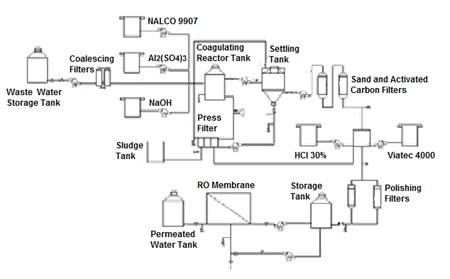 Before reaching the coagulating reactor, the flow of industrial wastewater receives the injection of some chemicals. For our experiments were used three different coagulants (CaO, Al2(SO4)3 and FeCl3) and two different flocculants (NALCO 9907 and NALCO 3249). Several tests were conducted in our jar equipment test.

To achieve optimum performance of this equipment, tests were carried out in a settling column built for laboratory tests scale.  This is the best way to determine the percentage of suspended solids removal from water samples.

Once selected the experiment with best performance, the software “Multifactor RSM from Design Expert 8.0” and the software “MATLAB R2009b applying the artificial neural network tool box, ANN” were applied.

Sedimentation tests at laboratory scale, using the sedimentation column provided enough experimental data of the recovered solids at different times and different depths. With this information were plotted isopercentage curves, which show the solid removal efficiency over time in the settling tank of our WWT pilot plant.

According with the design of experiments carried out in the RO membrane process, we performed 9 different runs, with 6 continuous days of operation in every one, collecting operational data every hour (pH, antifouling concentration, SiO2 concentration, SDT concentration, permeated water flow, etc.,) from every run. With this information collected, we identified the run with the best performance (quality characteristics and mainly the best permeated water flow recovered). For this best performance case, we used the response surface methodology (RSM) and artificial neural networks (ANN) in order to identify the optimal operation conditions.

The chemical composition of solids deposited on the RO membrane is mostly silicon oxide, with traces of sodium, magnesium, aluminum and calcium.

Ř      According with the results of our “Design of Experiments”, performed with the information obtained in Jar test at laboratory level, it is concluded that the pair of coagulant and flocculant Al2(SO4)3-NALCO 9907 is the one that obtained the best results in turbidity.

Ř      In relation to the isopercentage curves, made in the sedimentation practice at laboratory scale, is expected a 100% of settleable solids removal. This is a function of the 60 minutes of residence time in each one of the equipments, the coagulating reactor and settler.

Ř      The best results in the RO membrane experiments, was the case 9 with pH=4, antifouling concentration in 3 mg/L, inlet water flow in 4 gpm, inlet SiO2 concentration in 19 mg/L and inlet TDS concentration in 1346 mg/L. It was achieved a permeated water flow of 2.85 gpm, which represents a 71.25% of water recovery with sufficient quality to be reused (reduction of 94.72% of total dissolved solids and 79% of SiO2).

Ř      Increasing the pH of the industrial waste water fed to the reverse osmosis membrane, the permeated water flow decrease at any concentration of anti-fouling.

Ř      An increment of anti-fouling concentration causes an increase of permeated water flow.

Ř      The permeated water flow is maintained at 3 gpm during the first 89 hours in case 9.

Ř      The WWT pilot plant shows much better operational results (treated water quality and mainly the total recuperated water flow) than the obtained by Reynolds and Richards (the original technology being used at the Toluca can manufacturing plant).

Ř      In the response surface analysis, the factors that were significant in the permeated water flow, are the pH and anti-fouling concentration with a correlation coefficient R2 = 0.9749

Ř      In the stages of training, validation and testing of the neural network, for each case were obtained correlation coefficients R2 greater than 0.99

Ř      According to chemical analysis performed random in three sections of the reverse osmosis membrane, it is considered that the chemical composition of the solids deposited is silicon oxide with traces of sodium, magnesium and aluminum. In some deposits were found traces of carbon, which may come from residues of organic compounds.

Ř      The evolution of “mean squared error” of modeling, using neural networks for case 9, decreases from a value slightly greater than 1 to 0.001 in 49 epochs.

Ř      The total dissolved solids concentration in the permeated water flow, change from 85 to 55 mg/L in a time range of 140 hours, averaging about 70 mg/L.

Ř      The case 9, carried out in the reverse osmosis membrane, is the best one in performance due to the higher permeated water flow reached and lower concentrations of silicon oxide and total dissolved solids at the outlet.