Abstract - In earlier work, an electronic microarray device was used to carry out directed self-assembly of higher order 3D structures from biotin/streptavidin, DNA and enzyme derivatized nanoparticles. Structures with up to fifty layers of alternating biotin and streptavidin, DNA and enzyme nanoparticles were fabricated using a 400 site CMOS microarray system with 50 micron electrode structures. In this process, reconfigurable DC electric fields produced by the microarray were used to rapidly transport, concentrate and accelerate the binding of 40 and/or 200nm nanometer bio-derivatized nanoparticles to selected sites on the microarray. The nanoparticle layering process takes less than one minute per layer. The nanoparticle addressing/binding process was monitored by changes in fluorescence intensity as each nanoparticle layer was deposited. The final multilayered 3-D structures were about two microns in thickness and 50 microns in diameter. In order to make nanoparticle layered materials with macroscopic x-y dimensions (centimeter sizes), a large scale (4") silicon wafer based electronic array device has now been designed and fabricated. The overall goal is to use the large scale device to produce final lift-off photovoltaic/battery prototype materials composed of layered nanoparticles and conductive polymers.

Overview - One of the grand challenges in nanotechnology is the development of fabrication technologies that will lead to cost effective nanomanufacturing processes. In addition to the more classical top-down processes such as photolithography, so-called bottom-up processes are also being developed for carrying out self-assembly of nanostructures into higher order structures, materials and devices. To this end, considerable efforts have been carried out on both passive and active types of Layer-by-Layer (LBL) self-assembly processes as a way to make three dimensional layered structures which can have macroscopic x-y dimensions. Nevertheless, limitations of passive LBL and as well as active assembly processes provide considerable incentive to continue the development of better paradigms for nanofabrication and heterogeneous integration. Electronic arrays have several important features that make them attractive for assisted self-assembly nanofabrication [1]. First, a permeation layer or porous hydrogel is used to cover the microelectrode structures on the array. The permeation layer is usually impregnated with streptavidin which allows biotinylated DNA (antibodies, nanoparticles, etc.) to be bound at the selected site. This layer also allows relatively high DC electric field strengths to be used for rapid electrophoretic transport of molecules and nanostructures, while protecting the more sensitive DNA, proteins (enzymes) or nanostructures from the adverse effects of the electrolysis products generated at the electrodes. A second feature of electronic array devices is that they can be designed in a wide variety of shapes and sizes. Previously, arrays have been fabricated in sizes from 2 mm x 2 mm to over 2.5 cm x 2.5 cm, with 25 to 10,000 electrodes and with electrode structures which range in size from 10 microns to several millimeters. Using a 400 site CMOS microarray device and controller system we have demonstrated rapid and highly parallel assisted self-assembly of biotin

(Figure 1A-C). Through a rapid series of DC electric field (electrophoretic) directed depositions, accelerated hybridizations and washing steps, a layered nanostructure material was assembled using complementary DNA oligonucleotides as a structural binding material. The 400 site CMOS microelectrode array device used in the experiments allows individual control of activation time, DC current, and voltage levels and microelectrode polarity (positive, negative, and neutral) (see Figure 1A). The complementary DNA derivatized nanoparticles were specifically concentrated and hybridized (in zwitterionic histidine buffer) to the target DNA sequences bound to the porous hydrogel surface above the microelectrodes. The ability to independently control all 400 sites on the microarray allows for parallel combinatorial testing of a wide range of DNA binding conditions to determine the optimal parameters for hybridization and nanoparticle layering. Previously developed combinatorial methods used to determine optimal conditions for biotin/streptavidin nanoparticle layering [3] were again used to determine the optimal conditions for the DNA nanoparticle layering, i.e., the optimal addressing times and DC current levels [4]. We now show the design and fabrication of a large scale (4") silicon wafer based electronic array device for carrying the directed assembly of multilayered nanoparticle structures. 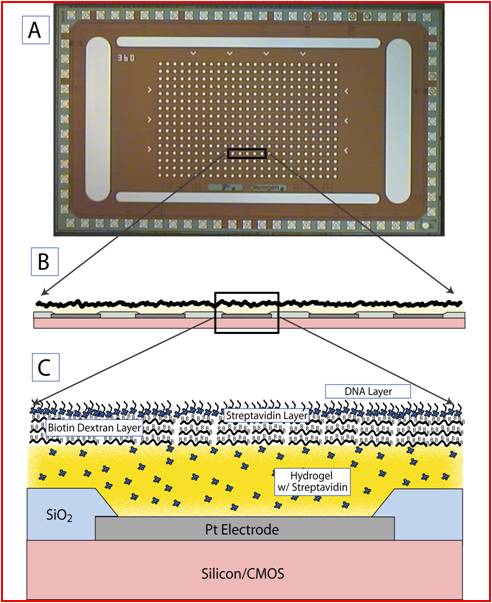 Figure 1 - (A) Shows the 400 site CMOS microelectrode array device. (B) shows a cross section of the 400 site microarray which includes: a silicon base, CMOS control circuitry, three platinum microelectrodes (55 um diameter). (C) shows an expanded view of the cross section with the overlaying polyacrylamide and streptavidin permeation gel layer; a biotin-dextran layer and a final streptavidin layer to which the biotinylated 24mer oligonucleotide target sequences or 51mer oligonucleotide target sequences are attached.

Results: The new 4" silicon wafer electric field directed layer by layer (EFD-LBL) assembler array device is shown below in Figures 2. The total deposition active array area is 5cm2 with 20 by 20 electrodes, the electrode gaps are 8um. The array is covered with a hydrogel (2% agarose gel). 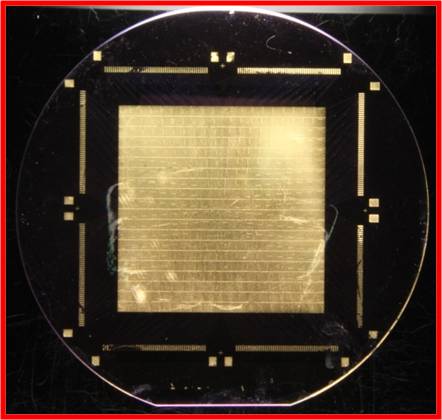 After completing the fabrication of six new 4" large scale EFD-LBL assembler array devices and overcoating them with 2% agarose, micro/nano particle layering experiments were carried out. Figure 3 below show the results for checkerboard deposition of negatively charged 10 micron polystyrene microparticles onto the array device. Each of the 2.5mm X 2.5mm electrodes were biased either (+) positive or (-) negative in a checkerboard fashion. It can be seen in Figure 3 that more of the negatively charged 10 µm polystyrene microparticles have collected where the electric field was positive. Particles on the negatively charged electrodes are non-specifically adhering to the surface. 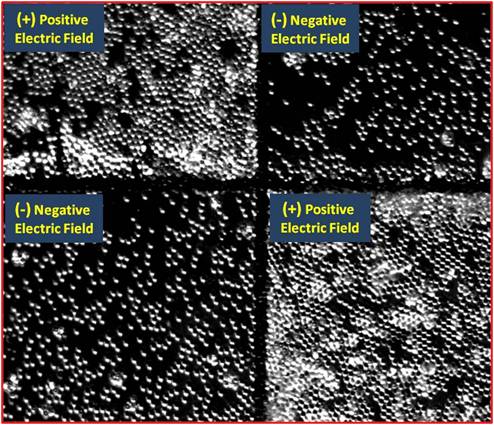 We believe the results of this study carry significant implications for the future use of large scale EFD-LBL devices to carry out the directed assembly of nanoparticles and other derivatized nanocomponents into higher order structures. EFD-LBL devices and processes using derivatized nanoparticles represents a unique synergy of combining the best aspects of "top-down" and "bottom-up" technologies into a viable nanofabrication process. It also represents a bio-inspired logic for self-assembly and hierarchal scaling of nanocomponents into integrated microscopic structures. In addition to producing lift-off photovoltaic/battery prototype materials composed of layered nanoparticles and conductive polymers, other potential applications for this process include fuel cells, miniaturized chemical and biosensor devices, "micronsize" dispersible chem/bio sensors for environmental and bioagent detection, lab-on a-chip devices and in-vivo diagnostic/drug delivery systems.