Polymeric micro/nanofibers are increasingly gaining importance due to their versatile application in diverse fields of tissue engineering, smart textiles, sensors and actuators. However, aligned deposition and continuous production of long fibers with sub-micron and nanoscale diameters with desired morphologies has been challenging. Recently, techniques of electrospinning, template synthesis and sequential micro dry spinning have been used to deposit a wide variety of micro/nano scale polymeric fibers in aligned configurations [1-6]. Among all these methods, electrospinning is the most popular process, which allows for the production of polymer/ceramic fibers ranging from tens of nanometers to a few microns in diameter [7-11]. Recent research has been devoted to control electrospun fiber morphology and surface porous /wrinkled fibers have been demonstrated  [12-13]. In addition, co-axial electrospinning has been well established as an easy and cost effective method to fabricate tubular structures [14]. Using specialized techniques, electrospinning methods are able to achieve control on fiber alignment in single layer. However, fiber spacing and three-dimensional stacking of fibers in precise locations has not been demonstrated using electrospinning methods. Our recently reported non-electrospinning fiber manufacturing strategy based on Spinneret based Tunable Engineering Parameter (STEP) technique is able to deposit fibers and fiber arrays in aligned configurations with control on spacing in single and multiple layers. This allows fabrication for the very first time of fiber hierarchical structures with each layer containing fibers of customized diameters (sub 100nm-micron), spacing (sub 100 nm-microns), orientation ( 0 deg. -90 deg.) and variety of polymeric materials.   In this study, we extend this capability to include control on surface morphology of fibers through manipulation of solvent and ambient atmosphere humidity.

All chemicals were used as received without further purification.

Polystyrene(PS) Two molecular weights PS (650K and  2000K g.mol-1, Polymer scientific, USA) were dissolved in xylene and DMF mixture  with varying wt% concentrations (from 1% to 18%) for one week prior to experiments.

STEP spinning. All experiments were performed at 20°C.  As shown in Fig 1(a), the viscous polymer solutions were pumped through the micropipette spinneret (ID=100mm) and formed a solution droplet at the nozzle. The substrate (Thermanox, USA) was mounted to a DC motor, which in turn was mounted onto a motorized three degree of freedom micro-positioning stage (VP-25XA, Newport Inc., USA). After the substrates contacted the solution droplet, fibers were collected on the substrate in aligned configurations. By adjusting the linear movement speed of the substrate and the angle between micropipette and the rotating axis, fiber spacing and orientation was tightly controlled.

Fiber Fusion: PMMA fiber network were treated with chlorobenzene vapor at 20°C in an enclosed chamber for 2 minutes.

Carbonization: PAN fibers were calcinated at 900°C in nitrogen atmosphere for 3 hours to produce carbon fibers. 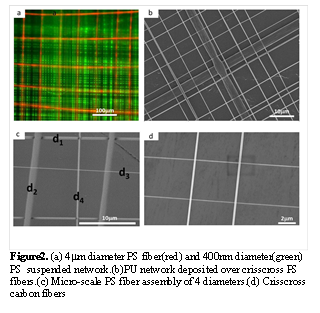 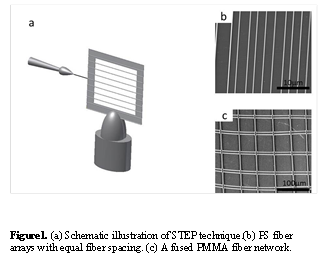 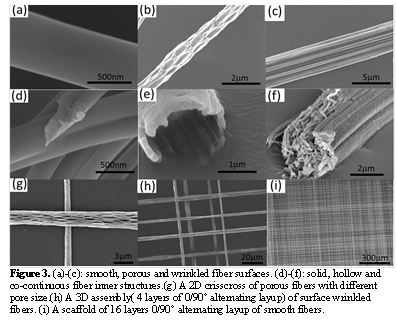 As a non-electrospinning technique, STEP relies on the rotating substrate to transform the polymer solution filament into nano/micro scale fibers. Since no voltage was used in this technique, the classic jet bending and spraying in electrospinning were avoided in STEP, and as a result, the STEP fiber diameter is narrowly distributed (within 20%) and STEP fibers maintain aligned configurations(angles between paralleled fibers are less than 1°) . In Fig 1(b), arrays of uniform diameter PS fibers were deposited with equal inter-fiber space; in Fig 1(c), two PMMA fiber arrays were deposited orthogonally, forming a crisscross fiber network, which was then treated by solvent vapor using a custom in-house solvent evaporator, creating an inter-connected structure composing of “unit cells”.

Using the STEP technique, we have successfully fabricated aligned nanofibers from a variety of polymers other than PS and PMMA; typical examples include polyurethane(PU), polyacrylonitrile(PAN), poly(ethylene oxide)(PEO), poly(lactic-co-glycolic acid)(PLGA) and fibrinogen. Using these uniform diameter fibers as building blocks, hierarchical fiber assemblies were achieved. Fig 2(a) shows a suspended PS fiber assembly composing of 4 mm and 400 nm diameter fibers. Fig 2(b) is a hierarchical assembly of PU fibers (300nm in diameter) and PS fiber ( 4mm in diameter). Fig 2(c) demonstrates a 10×10mm2 PS fiber assembly, composing of 4 different diameters (d1=400nm, d2=800nm,d3=80nm, d4=160nm).  In addition, we demonstrated that inorganic nanofibers could be fabricated by calcination of polymer precursors. In Fig 2 (d), crisscross carbon nanofibers were obtained through calcination of PAN fibers at 900° C in nitrogen atmosphere for 3 hours.

By changing the solvent and adjusting the humidity of atmosphere, we demonstrate that both the surface and inner morphology of STEP fibers can be altered. As shown in Fig 3(a)-(c), at 60% relative humidity (RH), by gradually adding DMF in xylene (from 0% wt to 50%wt and 75%wt), STEP fiber surfaces evolve from smooth to porous and finally wrinkled. The mechanism for surface attributes formation is solvent induced phase separation—the solvent rich phase turns into pores while the solvent poor phase turns into the matrix. As DMF concentration becomes dominating in the mixed solvent, the solvent becomes more hydrophilic and the polymer-solvent interaction is weakened, leading to larger dispersed phases. As a result, surface features evolve from discontinuous pores (Fig 3(b))to parallel channels(Fig 3(c)). Fig 3(d)-(f) demonstrate the corresponding inner fiber structures, which depend on the relative rates of solvent evaporation to phase separation rate. When solvent evaporation rate dominates over the phase separation rate (using solvent of 0% wt DMF), a uniformly solidified cross section is obtained (Fig3 d). When the solvent evaporation rate is faster( using solvent of 50%wt DMF), a thin skin consisting of almost pure polymer is formed first, which subsequently develops towards the core of the fiber, leading to the formation of a hollow fiber (Fig 3 e). To the best of our knowledge, this is first time tubular structures were obtained through control of evaporation process. In electrospinning, the tubular structures usually collapse into flat ribbons because of the lateral pressure caused by cumulated electrical charges[15]. In STEP, tubular structures were well preserved due to abscence of electrical field. The formation of a bi-continuous core (Fig 3 f) is attributed to the phase separation process when the evaporation rate is slowed (using solvent of 75% wt DMF). We go further to demonstrate that both the pore size and tube wall thickness are function of solution concentrations. By changing polymer concentration in the solvent, fibers with different diameters, surface morphologies and inner structures were obtained.  Finally, fibers of different morphologies were incorporated into 2D/3D assemblies as shown in Fig 3(g) to (i).

STEP turns out to be a very versatile method, which allows controlled fiber deposition of various materials.  The unique advantage of STEP in spacing and orientation control realizes the 3D nano/micro fiber assembly. Fiber morphology is subjected to both processing parameters ( humidity) and material parameters( concentration and solvent). Compared with electrospinning, STEP offers an alternative to achieve nano/micro fibers with desired position and attributes.