A PEG-DA MICROFLUIDIC DEVICE FOR THE STUDY OF

Microfluidic devices have been extensively used for the study of both prokaryotic and eukaryotic cells under well-defined chemical and mechanical conditions. In many cases, the establishment of steady-state (temporally invariant) spatially varying chemical gradients within which cells can be studied over extended periods of time and in absence of any fluid flow is of outmost importance.

In this work, we have microfabricated a microfluidic device made of the biocompatible and photopolymerizable polyethylene glycol diacrylate (PEG-DA). We have demonstrated that PEG-DA of different molecular weight can be used in order to achieve customizable chemical gradients. This microfluidic device is composed of three channels fabricated using photolithography methods and operates under the principle of diffusion as shown in Fig 1. 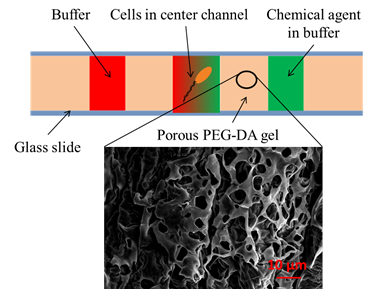 A solution of a chemical agent of choice (e.g. casamino acids) in a buffer (e.g. PBS) is flowed in one of the outer channels while just the buffer solution is flowed in the other outer channel. Cells (i.e. subject of study) reside in the buffer solution in the center channel. The chemical agent diffuses through the porous gel wall to the center channel, generating a well-defined spatially varying concentration field. The gel wall thickness and porosity can be designed to accommodate for the required chemical diffusion rate. COMSOL multiphysics simulations, diffusion coefficient measurements by optical spectrophotometry and diffusion characterization using fluorescence microscopy were employed to develop custom-devices with desired gel wall characteristics to determine the threshold chemical gradient at which Escherichia coli (E. coli) strain RP437 begin to exhibit a chemotactic behavior towards casamino acids. <>  <>METHODOLOGY

The microfluidic device is fabricated using a two-step photolithography process (Fig 2). Briefly, the glass surface was first rendered hydrophilic using oxygen plasma for duration of 5 minutes and then functionalized using a TPM (3-(Trichlorosilyl)propyl methacrylate) solution. PEG-DA gels of a desired molecular weight (700 Da, 2000 Da, 6000 Da or 10000 Da) were exposed to UV light (EFOS Ultracure, UV spot lamp, Mississauga, ON, Canada) at a wavelength of 365nm for 20 s through a photomask with the chosen pattern.

The fabricated gel pattern is assembled with the other layers of the device; Figure 3 shows an assembled microfluidic chemotaxis assay device. 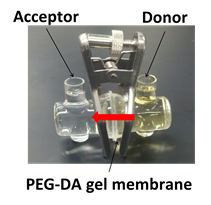 Table 1.  Diffusion coefficient of casamino acid through PEG-DA gel as a function of the gel molecular weight. 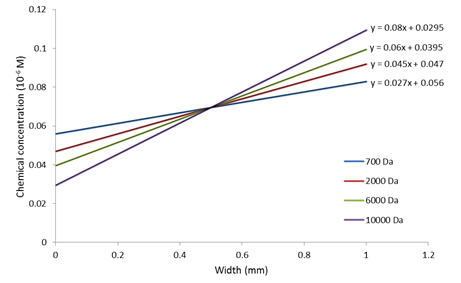 The chemical gradient values obtained above were verified experimentally using a fluorescein solution of identical initial concentration in the source channel. Fluorescent images of the center channel of the device were taken and analyzed using Image J (free software provided by the NIH). Fluorescein gradients within the center channel were then determined and compared within 20% of the chemical concentration gradients obtained through simulations. Table 2 demonstrates the results from the simulations and the experiments. The differences between the experimental and theoretical values can be attributed to the fact that the molecular weight of fluorescein (332 Da) used in the fluorescent quantification of the diffusion coefficient is different from the molecular weight of the casamino acids (250 Da).

Table 2. Comparison between experimental and simulation chemical gradients in the center channel.

A chemotaxis sensitivity assay was conducted using E. coli bacteria strain RP437 (fluorescent bacteria) towards casamino acids. The molecular weight of the gel used in this experiment was 700Da. The lowest molecular weight gel was chosen for this experiment because of the low chemical gradient it generates in the center channel. E. coli bacteria positively responded to the chemical attractant present in the source channel. Fig 6. shows the E. coli bacteria response towards casamino acids in the center channel. 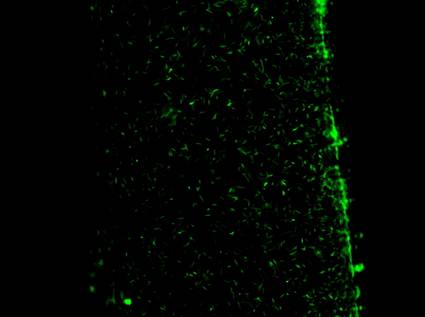 The fabrication of a microfluidic device with different gradient profiles can be achieved using different molecular weight gels. Bacterial chemotaxis studies usually require smaller chemical gradients to be established in the center channel. The use of the 700 Da molecular weight PEGDA gel can accommodate for the chemotaxis study of bacteria. The ability to control the chemical gradient in the center channel can help determine the threshold chemical gradient needed to provoke the chemotactic behavior of a strain of bacteria as well as the saturation chemical concentration.

In this work, multiple microfluidic devices were fabricated using a photopolymerizable hydrogel PEG-DA at different molecular weights. Different gel structures lead to significantly different diffusion coefficients and therefore distinctly different chemical gradient field within the main channel. The capability of realizing well-defined and customizable steady-state chemical gradient fields in absence of fluid flow opens many opportunities for the study of various behaviors of bacteria and mammalian cells within a controlled environment.     REFERENCES