Renewable and economically feasible production of biofuels and biochemical relies on the efficient use of lignocellulosic biomass as a feedstock.  However, necessary pretreatment of the biomass generates an array of growth inhibitors such as weak acids, phenolics and furan derivatives that adversely affect the fermentation characteristics.  The concentrations and relative amounts of each inhibitor in the hydrolysate vary among the sources of lignocellulosic biomass [1].  Acetic acid is a large contributor to weak acid inhibition in lignocellulosic hydrolysate and ranges in concentration from 1.6-4.4 g/L [1].

One mechanism by which weak acids inhibit cellular growth, known as the uncoupling theory, is a result of the diffusion of undissociated weak acids through the cytosolic membrane into the cytosol. Due to the near neutral pH of the cytosol, the weak acid dissociates into its conjugate base and proton, thereby decreasing cytosolic pH.  In order to maintain pH neutrality, protons are pumped from the cytosol against the concentration gradient by the membrane bound ATP synthase at the cost of ATP, thus reducing the amount of ATP available for cell growth.  Alternatively, the accumulation of anions in the cytosol has been suggested to play a role in growth inhibition.

Metabolic modeling has emerged as a powerful tool for enhancing our understanding of microorganisms and aiding in design of microbes for specific phenotypes.  Previous studies have modeled the impact of weak acids on microorganisms using kinetic and thermodynamic approaches.  The focus of such studies has largely been the toxic affects of weak acids in bacteria for food preservation purposes.  However, the yeast S. cerevisiae is the most abundant organism used for industrial fermentations, as it is known to be more robust to inhibitory compounds present in hydrolysate.  It would therefore be of interest to examine the affects of weak acids on the growth of an organism relevant to the biotechnology industry such as S. cerevisiae.

An alternative modeling approach, flux balance analysis (FBA), is a commonly used linear programming based, steady state framework that uses a stoichiometric model of the organism and a set of physicochemical and thermodynamic constraints to establish intracellular fluxes.

This work is a combined computational and experimental approach to examine the affects of weak acid toxicity in S. cerevisiae.  We focused on the toxicity of acetic acid as it is an abundant inhibitor in lignocellulosic hydrolysate.  It was hypothesized that the energy usage required to pump protons out of the cytosol via ATP-synthase could be represented using a genome-scale metabolic model.  Specifically, we extended the iMM904 consensus model of S. cerevisiae to include the uncoupling mechanism of weak acid toxicity [2].  We implemented the uncoupling mechanism by adding a series of reactions to the iMM904 model that describe the inhibitory effect.  Growth rate was optimized with glucose as the carbon source under varying concentrations of acetic acid and pH under both aerobic and anaerobic conditions.  Predicted growth rates and product profiles of S. cerevisiae were compared to experimental results for aerobic conditions obtained in this study, as well as anaerobic conditions reported by Tahezadeh et al [3].

Batch cultivations of S. cerevisiae CEN.PK MAT A/a were conducted in glucose mineral medium under aerobic conditions in the presence of acetic acid ranging from 0-4 g/L.  Throughout the cultivations, temperature and pH were maintained at 30°C and 5.5, respectively.  Growth and metabolic concentrations were monitored throughout the batches by optical density and HPLC measurements.

Growth of microorganisms such as S. cerevisiae in the presence of acetic acid is hindered due to the consumption of ATP necessary to maintain near-neutral cytosolic pH.  Model predictions were consistent with the aerobic growth rates in the batch cultures with varying concentrations of acetic acid at pH 5.5, as shown in Figure 1.  In this figure, the experimental growth rate is shown to decrease linearly (R2 = 0.93) with increasing acetic acid concentration.  Growth rates predicted by FBA at pH 5.5 follow this trend closely and predicted flux of metabolites were also in agreement with experimental data.  Interestingly, these results suggest that the toxic affect of acetic acid may be largely attributed to the uncoupling mechanism, rather than anion accumulation.

Growth rates and metabolite profiles were also predicted for varying acetic acid concentration for anaerobic conditions, and compared to the experimental values reported by [3].  Model predictions of growth rate and ethanol yield in this case were also in good agreement with experimental values. 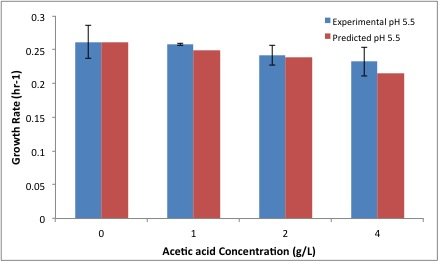 It was shown in this work that the genome-scale metabolic model is able to capture the growth associated energetic burden incurred by the presence of acetic acid.  The consensus model of S. cerevisiae was extended to include the uncoupling mechanism of weak acid toxicity, whereby intracellular dissociation of acids generates protons that are subsequently exported at the expense of ATP.  Model predictions of acetic acid toxicity agreed well with aerobic batch cultivation data of S. cerevisiae CEN.PK MAT A/a.  The model was also shown to predict the toxicity of acetic acid during anaerobic growth.

We expect this work to find application in the optimization of industrial processes.  By systematic evaluation of the model, the trade off between product yield, cellular growth rate and neutralization cost may be established, thereby improving the bioconversion of lignocellulosic hydrolysate to renewable chemicals.