One of the major roadblocks in the commercialization of Proton Exchange Membrane (PEM) fuel cells is the cost associated with platinum electrodes. While the hydrogen oxidation reaction on the anode is relatively fast, requiring low platinum loadings, the oxygen reduction reaction (ORR) on the cathode exhibits slow kinetics, necessitating higher platinum loadings (up to 0.5 mg/cm2).

Transition metal containing nitrogen and carbon catalysts have been found to be a viable replacement of platinum for ORR. The first generation of these catalysts consisted of Fe- or Co-containing macrocycles, which were heat treated between 400-1000oC, to provide more stability. Later, it was found that macrocycles were not necessary as starting materials: separate sources of carbon, nitrogen and a transition metal, when heat treated together could yield catalysts with significantly high activity and stability.

Previous work in our research group led to the development of non-noble metal ORR catalysts which consisted of carbon nanostructures containing nitrogen (CNx) which were grown on an Fe or Co-impregnated oxide support by pyrolysis at 900oC in the presence of an organic nitrogen precursor: acetonitrile. The catalyst thus obtained was then acid washed to leach out any exposed surface metal and non-conductive species. More recently, our efforts have been directed towards resolving the active site debate of these non-noble metal catalysts. We have shown that CNx is not sensitive to poisoning by known metal poisons such as H2S, CO and cyanide [1, 2], which would not have been possible if there existed a single active site comprising of a metal center. ORR activity of CNx showed an improvement after H2S treatment (Fig. 1a), in contrast with Pt/VC catalyst, which showed a marked decrease in activity after treatment (Fig. 1b).

Figure 1. Oxygen reduction activity of a. CNx b. Pt/VC catalyst without treatment and after H2S or H2 treatment. (Inset: Onset potential for ORR) [1]

X-ray Absorption Near Edge Structure (XANES) obtained from X-ray absorption spectroscopy experiments also showed no difference between untreated and H2S-treated CNx (Fig. 2).  These findings led us to believe that the acid washing step leaches out any exposed iron in CNx, and the remaining iron present is encased within the carbon structure, not accessible by oxygen molecules to contribute to ORR. 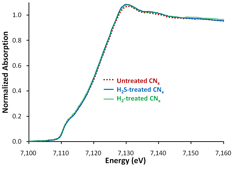 Our more recent efforts focused on synthesizing ORR catalysts, which consist of iron impregnated on a high surface area carbon support along with an organic porefiller. These catalysts are ball milled and subjected to different heat treatments, such as NH3, Ar, or N2. These catalysts have been thought to have a metal-N2 or metal-N4 type active site and are commonly known as Fe/N/C catalysts. Though they have a high initial performance, their activity diminishes significantly over time in a fuel cell environment. The activity losses could be attributed to leaching of iron under the acidic conditions prevalent on the cathode of the fuel cell.

Our current studies involve synthesizing and tailoring both metal-free CNx as well as Fe/N/C catalysts while optimizing their stability under half cell and fuel cell conditions. Comparisons between CNx and Fe/N/C catalysts based on spectroscopic techniques such as extended X-ray absorption fine structure (EXAFS), transmission electron microscopy (TEM) and X-ray photon spectroscopy (XPS) are aimed at providing additional insight for the differences pertaining to their active sites.