Presently, the costs associated with the capture of carbon dioxide from coal-fired power plants using first-generation oxyfuel combustion technology are prohibitively high.  The U.S. Department of Energy has set a goal of developing technologies that can lead to 90% capture of carbon dioxide, with an increased cost of electricity of no more than 35%, as compared to a similar plant without carbon capture.  One approach that has shown promise to both reduce capital costs and improve power plant efficiency, as compared to first-generation oxyfuel technology, is pressurized oxy-combustion.

In this work, a pressurized fuel-staged combustion approach is evaluated utilizing CFD simulation.  By staging the combustion, the temperature and heat transfer can be controlled.  This allows for the elimination of other temperature control processes, such as flue gas recycle or water/steam injection.  The potential benefits of fuel staging which may lead to improved cycle efficiency are: reduced process gas volume, increased radiative heat transfer, reduced oxygen demands, increased CO2 purity entering the carbon compression and purification unit (CPU), and reduced auxiliary power demands.

The principle of staged combustion is that combustion is carried out initially at very high stoichiometric ratio, enabling control of temperature even with very little or no flue gas recycle. To enable combustion under non-stoichiometric conditions, fuel is brought into the combustion chamber in stages.  The concept is illustrated in Figure 1 below.  Three stages are shown for illustration purposes only, and more stages may be optimum.  In the first stage, the coal is burned in pure oxygen. However, the amount of coal is small and the amount of excess O2 is very large.  With proper mixing, the temperature of the combustion products of the first stage can be controlled since there is a large amount of excess O2, which effectively acts as a diluent.  Also, the amount of coal consumed in the first stage is relatively small so that while the stoichiometric flame temperature near the burner may be high, the rapid mixing with excess oxygen and large radiative heat transfer causes the temperature to drop quickly.  The products of the first stage, a mixture of O2, CO2 and H2O, enter stage 2, where more fuel is injected and more O2 is consumed.  Since the O2 is diluted with products and the products have been cooled, the peak flame temperature in this stage can be lower than the first stage.  This process continues in multiple stages until nearly all of the O2 is consumed.

Results from a CFD simulation of a fuel-staged oxycombustion process are presented. The simulation is performed utilizing ANSYS FLUENT 13. The objective of this work is to determine the radiative and convective heat transfer characteristics that are required to design a unique boiler to accommodate staged combustion. In addition, consideration is given to the optimum distance between stages, optimum placement of excess oxygen in the first stage (i.e. burner injection vs. in furnace injection), and the number of stages and the thermal input at each stage. 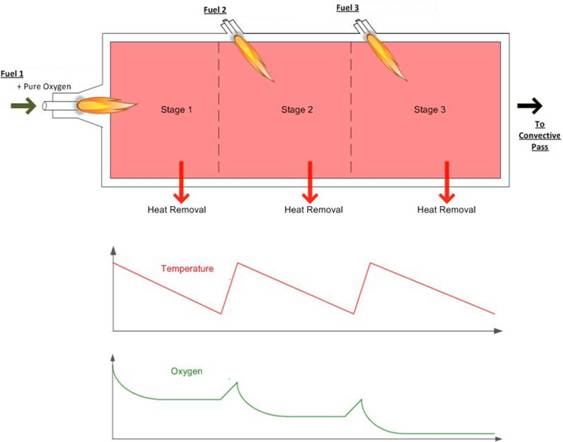