Hydrogels have many favorable properties in the context of drug delivery such as their chemical, physical, and mechanical similarities to native extracellular matrix as well as their low interfacial energy, leading to generally good biocompatibility responses.  However, in the context of delivering hydrophobic drugs, hydrogels present significant challenges in terms of both the drug loading and drug release. If drug loading is attempted following gel formation, the amount of drug incorporated is minimal and rarely reaches therapeutic levels, given the lack of affinity between the highly hydrated hydrogel and the hydrophobic therapeutic.  If a sufficient degree of loading is somehow achieved, the absence of interactions between the hydrophobic drug and the hydrophilic matrix typically results in a rapid release profile in vivo via partitioning into lipid bilayers.  Nanocomposite hydrogels in which hydrophobic drugs are incorporated inside liposomes, lipid droplets, or polymeric micro or nanoparticles have been reported to address this challenge.  However, such materials are often opaque owing to the scattering of the embedded phases (problematic in, for example, ocular drug delivery); in addition, the presence of an additional phase can significantly alter the swelling properties and/or the mechanical properties of the hydrogel, potentially problematic in some biological environments (e.g. at joints).  As an alternative, hydrogels in which cyclodextrin (CD) is incorporated may facilitate hydrophobic drug delivery while avoiding these issues. The hydrophobic cavity of CDs can facilitate hydrophobic drug binding, while the hydrophilic exterior and the small dimensions (2-3nm) of cyclodextrins maintain a highly swollen and transparent hydrogel structure.

In this work, a dexamethasone-loaded dextran/β-cyclodextrin (βCD)-based hydrogel was designed (Dex-βCD). Gelation of these materials occurs in situ upon injection through the reaction of an aldehyde-functionalized dextran with a hydrazide-functionalized βCD molecule, creating a (slowly) hydrolytically degradable, covalently-crosslinked hydrogel network formed from liquid-like precursors.  The dual role of βCD as a crosslinker and host for the hydrophobic drug allows for the adjustment of hydrogel properties and release behavior based on the number of crosslinks between hydrazide-βCD and the hydrogel.  In this way, drug release kinetics and drug loading can easily be manipulated by changing the concentration of βCD incorporated into the hydrogel and/or the ratio of entrapped versus crosslinked βCD molecules.  We show that drug release can be facilitated through both hydrophobic partitioning (with bound βCD) and simple diffusion (of the free βCD-drug complex through the bulk hydrogel).

βCD was functionalized with multiple hydrazide groups by reacting 5 g of carboxymethylated βCD (3.81 COOH/ βCD) with 12.6 g of ADH in 120 mL of water. The pH of the solution was adjusted to 4.75 and the reaction was started with the addition of 13.85 g of EDC.  The pH was maintained at 4.75 until it stabilized, which took approximately 4 hours.  The solution was neutralized to a pH of 7.0 and water was removed from the product under vacuum in a rotary evaporator at 60°C. The product was precipitated with a large excess of acetone and collected through vacuum filtration.  The degree of substitution of the hydrazide-functionalized product was determined through potentiometric titration (~3.1 hydrazide groups/βCD).  A hydrazide-functionalized dextran polymer (Dex-Hzd, ~600 hydrazide groups per polymer chain) was synthesized in a similar fashion, except the modified polymer was purified through dialysis against water and isolated via lyophilization. Aldehyde-functionalized dextran (Dex-Ald) was synthesized by adding 10 mL of an 80 mg/mL aqueous solution of sodium periodate to 1.5 g of dextran [Mr- 500,000] in 150mL of water.  The reaction was allowed to proceed for two hours and was stopped with the addition of 0.4 mL of ethylene glycol.   The modified polymer was dialyzed and isolated through lyophilization. Drug loading was achieved by adding a large excess of dexamethasone to 2 mL of a βCD-Hzd solution and shaking for 3 days at ambient temperature.  Drug uptake by βCD-Hzd was quantified using gravimetric methods.  Dexamethasone loading in the control dextran hydrogel was achieved by suspending the hydrazide-functionalized dextran in a 90 µg/mL solution of dexamethasone in water. The hydrogel was formed using a double-barrel syringe in which each barrel contained the contents of the gel precursor solutions, composed of either a hydrazide phase or an aldehyde phase.  Equal amounts of both phases were extruded through the mixing device and injected into silicone rubber moulds. Six hydrogels were used for each release study and were placed in cell culture inserts in a 12-well culture plate. The release study was carried out at 37°C over the course of 21 days.  Quantitative determinations of dexamethasone in PBS release solutions were performed using high-performance liquid chromatographic (HPLC).

Figure 1 shows the release of dexamethasone from a Dex-βCD gel compared to a Dex-only gel (2wt% Dex-Hzd, 2wt% Dex-Ald in both gels).  Drug release from a dextran-only hydrogel followed conventional hydrogel kinetics, consisting of an initial (rapid) burst followed by first order release that was largely completed after 1 day.  In comparison, when βCD was added to the hydrogel, the burst release was nearly eliminated and only 5.4% of the total drug was released from the Dex-βCD gel over the 20-day sampling period.  Of particular interest, when the drug release was plotted as a function of the sample number as opposed to time (Figure 1b), the dextran-only hydrogel shows a typical first-order profile (characteristic of diffusion-based release) while the βCD-containing hydrogel exhibits constant release per sample collected.  The amount of dexamethasone released (~1mg/mL/sample) is significantly lower than the solubility of dexamethasone in the PBS release medium (~80mg/mL) and is constant regardless of the time between sampling points, suggesting that the slow release from this gel is attributable to partitioning of diffusible drug species between the hydrogel phase and the release medium.  The immobilization of βCD via crosslinking prevents the diffusion of (soluble) βCD-dexamethasone complex out of the hydrogel, leading to the extremely slow release observed.  Extrapolating these results, for use in the eye (clearance time ~2 hours for dexamethasone from vitreous humour), this release rate would facilitate continuous release of dexamethasone for 3-4 months via a purely partitioning mechanism, significantly longer release than currently reported hydrogels for this purpose.

By doubling the concentration of the Dex-Hzd polymer in the gel precursor solution to 4wt%, the hydrogel became significantly more crosslinked overall, with a ~50% increase in G' compared to the 2wt% Dex-Hzd hydrogel.  For diffusion-based release, this would normally result in significant slowing of the drug release kinetics, as higher elasticity corresponds to higher crosslink density and thus lower average pore sizes.  However, Figure 2 indicates that drug release in hydrogels prepared with higher fractions of Dex-Hzd is significantly faster than that from hydrogels prepared with lower Dex-Hzd concentrations; during the 20 day release study, 64% of the total contained drug was released from the 4wt% Dex-Hzd hydrogel, an 11-fold higher dexamethasone release relative to the gels prepared with 2wt% Dex-Hzd.  In addition, release no longer follows a linear profile with sample number for 4wt% Dex-Hzd hydrogels (Figure 2b), suggesting a significant diffusive contribution to the release kinetics.  We attribute these differences in release kinetics to the higher mobility of the complexed drug when βCD is physically entrapped in a hydrogel versus chemically crosslinked.  In this case, the increased number of available hydrazide groups in hydrogel recipes involving 4wt% Dex-Hzd can compete more effectively with hydrazide groups on the functionalized βCD, making βCD is less likely to crosslink to the gel and thus more likely to become physically entrapped in the hydrogel network.  As a result, more diffusible drug species are present and release can occur via both partitioning and diffusion-based mechanisms.   This result suggests that drug release from βCD-containing hydrogels can be precisely tuned, both in magnitude and mechanism, by the number of βCD groups added as well as the degree to which those βCD groups are covalently attached to the hydrogel network.  Biocompatibility results for this hydrogel will be presented to assess the potential of this hydrogel as a clinical drug release vehicle.

In hydrogel systems where βCD was primarily immobilized within the polymer network, an extremely slow, partition-based drug release rate was observed.  In hydrogel systems where βCD was in part physically entrapped within the matrix, drug release was significantly faster and occurred via both diffusion and partitioning.  Thus, βCD can be used to increase or decrease the rate of drug release from hydrogels while in both cases significantly increasing the total capacity of the gel to deliver a hydrophobic drug payload.  Coupled with the injectability of the hydrogel, such materials have significant potential for long-term (i.e. several months) local hydrophobic drug delivery.

Financial support was provided by the 20/20 NSERC Ophthalmic Materials Network. 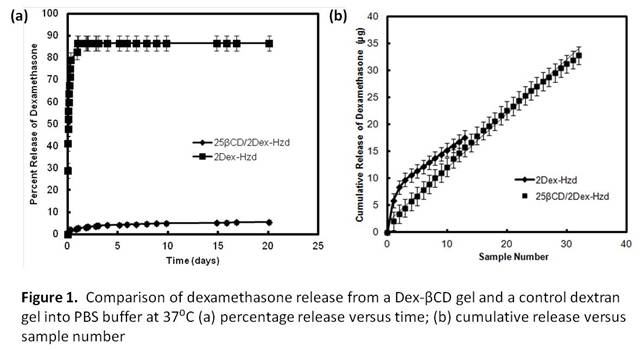 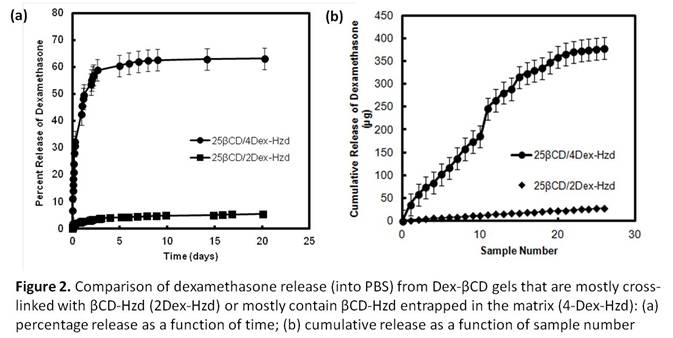