Hydrocarbon-based biofuels derived from renewable, non-food carbon sources serve as a promising alternative to petroleum-derived fuels and are capable of mitigating greenhouse gas emissions. A sustainable biofuel strategy should utilize widely renewable biomass feedstocks, especially wastes, for which industries carry the high cost of disposal. Fuel production and power cogeneration from waste recovery is a sustainable and potentially profitable option to explore, addressing today's economic challenges of energy independence and waste management. A potentially interesting candidate in this scenario is brown grease. Brown grease is a mixture of high-value hydrocarbons, such as waste vegetable oil, animal fats and grease that is collected in water treatment plants and requires further treatment before disposal. However, brown grease has a higher level of contamination, compared to yellow grease, and cannot be used as animal feedstock or fertilizer. Additionally, brown grease is responsible for about 40% of all sewer overflows, causing back-ups and damage to pipe lines and for about 20,000,000 illnesses each year in the USA [1]. Therefore, special attention must be dedicated to its disposal and the cost associated. The main goal of this project is to explore the possibility of transforming 100% of the raw brown grease into biodiesel and synthesis gas that can be used for power generation. This work comprises a multi-disciplinary study of experimentation and simulation of optimal process options for the conversion of brown grease to energy and energy carriers.

In this study, heat treatment of the raw brown grease results in phase separation of the organic mixture. The light product, mainly characterized by a high free fatty acid (FFA) content (approximately 90%), is extracted and processed to obtain biodiesel. A two-step esterification process, using 5% (v/v) HCL and with a 9 to 1 methanol/oil molar ratio, produces liquid products with an acid value smaller than 0.5% FFA. The triglyceride is then transesterified using 2wt% KOH and a 6 to 1 of methanol/fats molar ratio, reaching higher ester content in the biodiesel. Gas Chromatography (Figure 1) shows that the biodiesel from the extracted brown grease oil not only satisfies the total and free glycerin percentage requirements imposed by the ASTM specifications, but also presents similar value in comparison with the biodiesel derived from Yellow Grease (Table 1), which makes it more competitive as brown grease is more abundant. 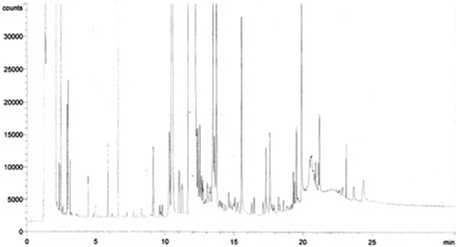 The heavy product consists of a solid mixture, which is extracted and gasified to obtain synthesis gas. In Figure 2 thermogravimetric analysis (TGA) of the heavy brown grease product shows that this biosolid is gasifiable in its entirety. However the minor, almost negligible, residue of gasification contain inorganic compounds, of undefined environmental impact. Further analysis of the inorganics and their fate after gasification will be presented and discussed. 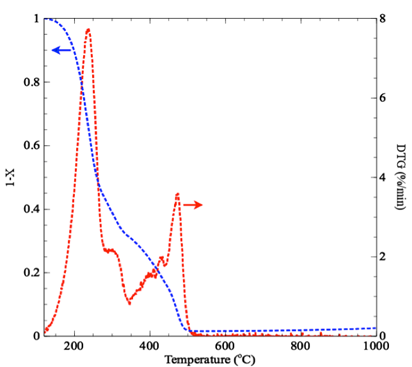 TGA and gas product analysis (performed in gas chromatography/mass spectroscopy/Fourier transform Infrared, not shown here) show that the heavy product of brown grease is rich in hydrogen; thus, a valuable feedstock. Elemental analysis (Table 2) shows that the carbon to hydrogen ratio of the brown grease heavy fraction biosolid is lower than pine sawdust, which confirms its value as a gasification feedstock.

On the basis of experimental results, process simulation of an integrated brown grease biorefinery is performed in Aspen Plus. The objective of the simulation study is to identify the cost and profitability of an integrated brown grease refinery with power co-generation, focusing also on the benefits of capturing CO2 and the overall reduction of greenhouse gas emissions. The energy penalties for drying, O2 separation, H2S, SOx, NOx, and CO2 separation are estimated for various co-gasification scenarios. A brief description of the process flow sheet is as follows. Raw brown grease is fed to the system and the first operation consists of heating the mixture in order to evaporate all the containing water and to phase separate the substance in the two layers. The oil at the top layer is extracted and sent to the biodiesel production hierarchy, while the heavier biosolids are taken to the syngas production hierarchy for gasification. In the biodiesel production hierarchy the liquid animal fat enters the pretreatment unit where impurities are filtered and removed. Cleaned animal fat enters an esterification unit where the oil is homogenously mixed at a constant temperature of 60°C with Methanol (MeOH) and Hydrochloric acid (HCl), which serves as a catalyst. The reaction reduces the concentration of the FFA. Then the stream is washed and dried. A second esterification process follows, to convert all the FFA remaining into Methyl ester. The stream is washed and dried again to remove remaining methanol and acid catalyst. The processed flow then enters the Transesterification unit where a base catalyst, Potassium hydroxide (KOH), is used to convert the triglycerides into biodiesel. This reaction also produces glycerol, which can be separated and sold as a chemical. Finally, crude biodiesel enters the post-processing unit where it is refined and tested for quality standards.

In the syngas production hierarchy the dewatered biosolids enter the preparation unit where they are mixed with coal, which has previously passed a process of sizing (crushing and screening) and drying. Air is separated mainly in Nitrogen and Oxygen in the Air Separation Unit (ASU) through cryogenic distillations. The mixed feedstock, together with the stream of almost pure Oxygen, enters the gasifier. The melted ash is collected at the bottom of the reactor and disposed. Then the syngas is cleaned from H2S and CO2 in the Acid Gas Cleaning Unit (Rectisol Process). Captured CO2 is sent to compression and storage, and the H2S is converted to solid S in the Claus Unit [3]. Finally the syngas is burned in a combined cycle, where heat and electricity are produced. The hot gas, after expansion in the gas turbine, pass through a Heat Recovery Steam Generator (HRSG) where superheated, high pressure steam is produced which can be used for district heating and/or expanded in a steam turbine for additional power production.

The experimental analysis integrated with the ASPEN model allows to examine the feasibility of recovering 100% of the raw brown grease that would otherwise have to be disposed at a high cost, due to its contamination as a water treatment waste. The opportunity of transforming it into valuable energy products opens access to new markets, while the sustainability of the overall process and the improved carbon life cycles of this process, lead to its reassessment from an unwanted waste to a precious resource.

This work was supported in part by the Faculty Large Grant of the University of Connecticut and in part by the EAGLES (Engineers as Global Leaders for Energy Sustainability) Atlantis Fellowship.