Thermoresponsive hydrogels based on poly(N-isopropylacrylamide) (PNIPAM) that switch from a water-swollen state at low temperature to a collapsed state at high temperature have been the subject of extensive investigation. The volume phase transition temperature of PNIPAM hydrogels, lying just below normal physiological temperature, has sparked particular interest in the biomedical applications of these hydrogels as “smart”, environmentally sensitive tissue engineering scaffolds, cell growth supports, and drug delivery vehicles, among other applications. Despite their potential in these biomedical applications, PNIPAM hydrogels have not achieved clinical acceptance, primarily due to concerns regarding the ultimate fate of PNIPAM in the body. Though monomeric NIPAM is toxic, PNIPAM has been shown to be effectively noncytotoxic at concentrations realistic to many medical applications.1 However, possible depolymerization and/or chronic bioaccumulation of PNIPAM represent significant regulatory barriers to medical use. PNIPAM hydrogels are most often formed outside of the body since polymerization most often makes use of free radical chemistry and thermal or UV radiation, which would induce significant cell toxicity and therefore cannot be performed in deep tissues. While weakly cross-linked hydrogels, such as those formed through physical interactions, may be sufficiently viscous to facilitate injection, injection of more highly elastic hydrogels is impractical. As a result, there is a need for mechanically robust PNIPAM-based hydrogels that can be introduced into the body through minimally invasive means and are designed to subsequently degrade into safe products that can be cleared following use.

We have developed PNIPAM based hydrogels capable of forming in situ following coinjection of precursor copolymers into the body via a double-barreled syringe. The chemical cross-links used to form these hydrogel networks are based on rapidly forming, yet hydrolytically labile, hydrazone bonds that form between aldehyde and hydrazide functionalized PNIPAM copolymer precursors. By basing these hydrogels on hydrazone chemistry, we have developed rapidly forming hydrogels capable of biodegradation within the body. Further to this, by using PNIPAM precursors of molecular weights low enough for kidney clearance, these gels may be eliminated following their biodegradation in vivo.

Hydrogels were fabricated from hydrazide-functionalized PNIPAM and aldehyde-functionalized PNIPAM. The hydrazide-functionalized precursor was generated by copolymerizing NIPAM with acrylic acid and subsequently grafting the resulting copolymer with adipic acid dihydrazide using aqueous carbodiimide chemistry. Aldehyde-functionalized PNIPAM was synthesized by copolymerizing NIPAM with 2,3-dihydroxypropyl methacrylate and subsequently oxidatively cleaving the resulting copolymer using sodium periodate. The molecular weight of precursor PNIPAM copolymers was determined using aqueous gel permeation chromatography. The degree of hydrazide functionality of PNIPAM copolymers was determined through conductometric titration. Aldehyde functionality was quantified with a carbazate-based aldehyde detection assay. Hydrazide and aldehyde-functionalized polymers were mixed via co-injection through a needle. These polymers rapidly form a hydrazone-crosslinked hydrogel network upon mixing. Reversible thermoresponsiveness was determined gravimetrically by incubating the gels at alternating temperatures of 25 °C and 37 °C. The degradability of these gels was demonstrated by incubating them in different concentrations of hydrochloric acid and subsequently determining the percent of gel loss over a period of time gravimetrically. Cytotoxicity in response to gel precursors (degradation products) was assayed using an MTT assay. Finally, both acute and chronic histopathology was determined in BALB/c mice following sub-cutaneous injection of polymeric precursors via dual-barreled syringe.

The reversible thermal response of the resulting PNIPAM hydrogel is demonstrated in Figure 1. The initial collapse of the hydrogel network occurs more rapidly than subsequent cycles, while reswelling of the network takes place over a number of days before the equilibrium swelling condition is again reached. Although the hydrogels do not fully recover to the zero strain state following their first incubation at 37 °C, they do exhibit reversible swelling-deswelling transitions upon subsequent cycles; this is consistent with previous reports of conventional, highly-crosslinked PNIPAM hydrogels.2 The swelling response is mirrored by changes in the turbidity of the hydrogel, which switches from nearly transparent immediately following gel formation to completely opaque upon thermal collapse to semi-translucent upon rehydration (Figure 1, side panel). Thus, these injectable hydrogels exhibit the same thermal deswelling and scattering properties of conventional, nondegradable PNIPAM hydrogels. 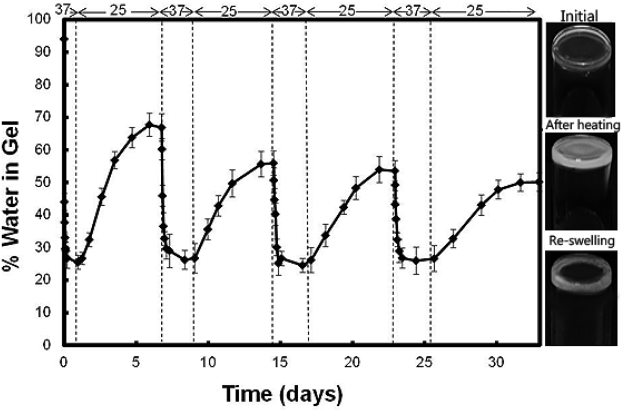 Figure 1. Reversible collapse/swelling of poly(NIPAM) hydrogel network incubated in 10 mM PBS (pH 7.4) at alternating temperatures of 25 and37 °C (as noted at top of graph). Inset: Gel opacity resulting from a transition from the zero-strain state to 37 °C and reswelling at 25 °C.

Figure 2 demonstrates the degradability of the synthesized PNIPAM hydrogels in response to acid-catalyzed hydrolysis at constant [H+] concentrations. The increase in degradation rate with increasing acid concentration demonstrates that bulk loss of hydrogel occurs by proton-catalyzed hydrolysis of the hydrazone crosslinks.  GPC further confirmed the regeneration of the initial reactive copolymers upon degradation (i.e. the carbon-carbon polymer backbone is not hydrolytically susceptible). By degrading the hydrogels at defined chemical crosslinking points, we expect that the toxic effects observed with monomeric byproduct may be avoided without compromising the potential clearance of the polymer degradation products through the kidney. 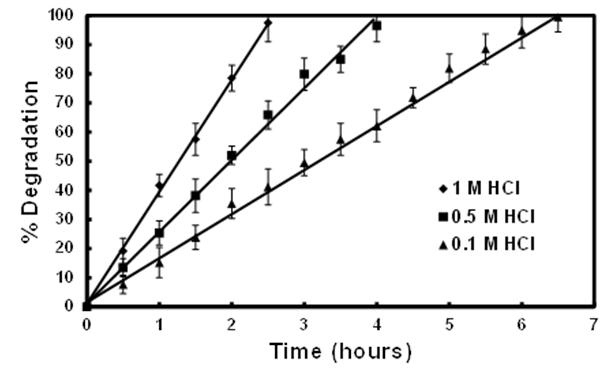 In vitro and in vivo toxicity studies of the injectable PNIPAM hydrogels and the hydrazide and aldehyde-reactive precursor copolymers are shown in Figure 3. In vitro cell viability assays were performed using an MTT assay with 3T3 mouse fibroblasts and retinal pigment epithelial (RPE) cells. PNIPAM-co-ADH induces a slight cytotoxic response at concentrations greater than 400 μg/mL in 3T3 cells (Figure 3A) and no significant toxicity at any tested concentration in RPE cells (Figure 3B). Poly(NIPAM-cooxoethyl methacrylate) induces only mild cytotoxicity to both cell types at low-to-moderate  concentrations only becoming cytotoxic at very high concentrations (i.e., 2000 μg/mL, Figures 3A,B). Overall, any observed cytotoxicity occurs at polymer concentrations well above any local concentrations expected due to the slow hydrolytic degradation of hydrogel under physiological conditions.
Acute (48 h post-injection) in vivo toxicity assays were performed via subcutaneous injection of BALB/c mice with 6 wt % solutions of PNIPAM polymer precursors (Figures 3-C and D), and a 6 wt % in situ-formed hydrogel  (Figure 3-E). Hematoxylin-eosin (H&E) staining indicates that the reactive copolymer solutions are largely cleared from the injection site 48 h post-injection and induced only a very mild acute inflammatory response. The in situ-gelled PNIPAM hydrogel remains at the injection site after 48 h and induces only a mild inflammatory response at the tissue-hydrogel interface consisting predominantly of macrophages with a few neutrophils. Following a five-month chronic incubation of the gel in vivo (Figure 3F) the gel remains at the site of introduction, although the quantity of residual gel was somewhat lower than the initial injected volume. However, minimal to no fibrous capsule formation was observed at the gel-tissue interface and no sign of a chronic inflammatory response was noted either within the residual gel or within the tissue adjacent to the gel.  Together, these results suggest that the gel is well-tolerated within the subcutaneous space and may be amenable for practical use in in vivo applications. 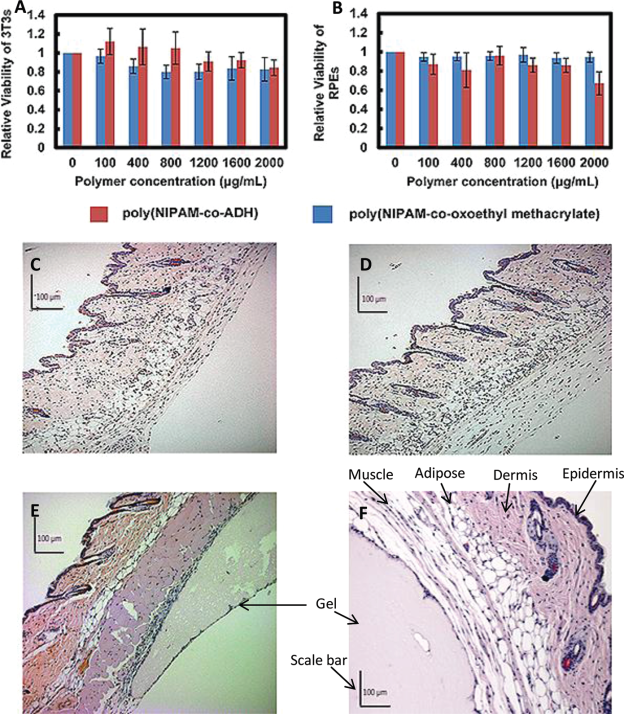 We have developed a novel method to synthesize covalently cross-linked and in situ-gellable thermoresponsive hydrogels based on poly(N-isopropylacrylamide) using reversible and rapid hydrazide-aldehyde chemistry to link functionalized PNIPAM oligomers. The hydrogels exhibit the same thermal swelling-deswelling responses as conventional PNIPAM hydrogels but can be degraded back into the reactive polymer gel precursors via an acid-catalyzed hydrolysis process. Furthermore, the combination of rapid gelation with low toxicity observed herein suggests that this hydrazide-aldehyde oligomer cross-linking approach may be translatable to the design of injectable, degradable covalently cross-linked hydrogels based on a range of biocompatible synthetic polymers.

Funding from the Natural Sciences and Engineering Research Council of Canada (NSERC) and the Ontario Ministry of Research and Innovation (Early Researcher Award program) is gratefully acknowledged.