The gas-phase ammoxidation of heteroaromatics is an ecologically and economically efficient route to synthesize a variety of different nitriles (Eq. 1), as long as high nitrile selectivities and space-time yields (STY) are reached.

A novel approach to improve STY at a high selectivity for the ammoxidation was initiated by the discovery of the VAlON catalysts, providing high STY for propane ammoxidation [1]. Recently, we have found that VAlON and VZrON catalysts show promising catalytic performances in the ammoxidation of 3-picoline (3-PIC) to 3-cyanopyridine (3-CP) [2], being an important fine chemical and used as a precursor for the vitamin B3 production. STY could be almost triplicated with VZrON catalysts compared to a common used benchmark catalyst, based on mixed metal oxides [2, 3]. However, both oxynitrides suffer from a lower selectivity compared to the benchmark catalyst. Additionally, VZrON catalysts were proved to be highly active, but poorly selective compared to VAlON. By ex situ analysis (e.g. XPS, XRD) and in situ EPR spectroscopy it was found that those differences in catalytic performances might be due to a higher VOx site polymerisation, a higher mean V surface oxidation state and an almost N-free surface for the VZrON, but not for VAlON catalysts [2]. This structure-reactivity relationship inspired us to combine the active VZrON and selective VAlON binary oxynitrides to a novel ternary VZrAlON catalyst class. Besides the catalytic performances, the structure of VZrAlON catalysts has been characterized as a function of the V/(Al+Zr) ratio at a constant Al/Zr ratio of 1.5, using several analytical ex situ techniques (XRD, XPS, ATR, UV-Vis-DRS) and in situ EPR spectroscopy as well.

Also the structural properties of VZrAlON differ significantly from those of VAlON and VZrON. From XPS studies it was found, that the combination of VAlON and VZrON to VZrAlON leads to a higher amount of different N surface sites (NH4+, NH2-, NH2- N3- ) and a mean V surface oxidation state close to +4. In contrast, the surface of VZrON catalyst was almost free of any N site, while for VAlON catalysts only nitride-like sites could be detected by XPS studies. In situ EPR studies, performed over VAlON, VZrON and VZrAlON catalysts during ammoxidation, suggest that only VZrAlON catalysts provide two different types of isolated VOx sites and a small fraction of anionic vacancies, besides a certain amount of polymerised VOx sites under working state. As proved from nitridation of the VZrAlO oxide precursor, monitored by in situ EPR spectroscopy, those anionic vacancies are introduced via nitridation. For comparison, the concentration of isolated VO2+ sites in VZrON catalysts is significantly lower under reaction conditions, while for VAlON catalysts the shape of EPR signals point to a high amount of isolated VO2+ sites. Those trends are also evident from UV-Vis-DRS investigations, performed ex situ on the samples. 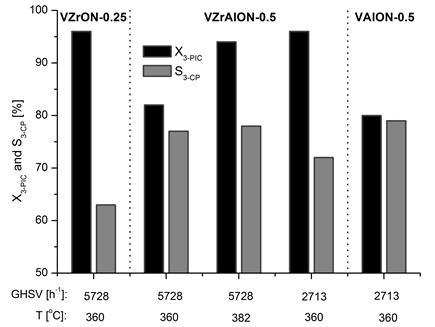 Thus, the improved catalytic performance of VZrAlON compared to VAlON and VZrON might be due to a fractional incorporation of Zr into the VAlON network, suppressing the high VOx site polymerisation, as it is the case for VZrON catalysts. In addition, the higher nitrile selectivity might be due to the ability of the VZrAlON catalyst to incorporate NHx (x = 1, 2) sites from the gas phase onto its surface and probably due to a better surface electron transport enabled by a small fraction of anionic vacancies.