The growth in world population, an increase in demand for resources, a changing global climate, and pollution of available water resources are all exerting unprecedented demands on fresh water supplies around the world. Furthermore, rising energy costs and global warming, both linked to use of fossil-fuels, are driving the need for low energy, more sustainable forms of water reclamation. Forward Osmosis (FO) has attracted growing interest recently as a highly promising technology for desalination and water reuse. The basis of FO is osmosis itself, a natural and spontaneously occurring process. It has attracted wide interest for its potential applications in a number of areas [1] including desalination [2], wastewater treatment [3-4], and food processing [5]. A related membrane process, known as pressure retarded osmosis (PRO), has also been used for osmotic power generation [6].

The FO process offers some advantages over conventional pressure-driven membrane processes such as (i) potentially lower energy consumption and (ii) minimal disturbance to sensitive components/species in the feed solution and it is the former that we address herein. It is widely recognized that the water flux in an FO process is severely limited by internal concentration polarization (ICP) which is a term for describing the phenomenon by which there is either dilution of the high-osmotic-pressure draw solution (DS) or undesirable concentration of the feed solution (FS) inside the FO support structure [see ref 1 for more details]. The former occurs if the support faces the draw solution; the latter if the support faces the feed.

The overall aim of the analysis is to ask whether even an ideal FO membrane of very large A and K will be superior to existing RO systems, and if so under what circumstances.  Initially we have ourselves with three specific questions:

(1)   What is the relationship between the flux, ratio of osmotic pressures and mass transfer coefficients?

Two answers to the third question will be covered in the presentation. Regarding the first question a sample result is presented in Figure 1.  This is based upon the widely used equations found in [1] and elsewhere.  These do not include a full allowance for mass transfer in the feed and draw solution boundary layer mass transfer coefficients, kf and kd.  The importance of both K and the osmotic pressure ratio is apparent. 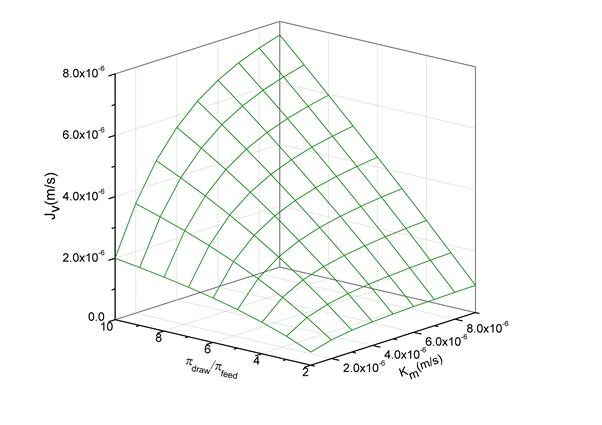 As the mass transfer coefficient of support has improved in practice (made thinner and with great porosity) allowance for kf and kd becomes essential.  Under circumstances in which the membrane parameters A and K become large (i.e. a tendency towards an ideal FO membrane), it can be shown that the flux tends to

which for very large K would simplify to:

Considerations of limitations due to scaling coupled with equation (2) suggest that even if membranes with high A, were available FO would be unattractive for high salinity feeds.  This is certainly not contradicted by recent experimental results [7].  The main conclusion is that in the area of water treatment application of FO should be directed at low salinity feed waters.