INTRODUCTION: The development of versatile hydrogel networks that elicit some change in response to one or more external stimuli could have a diverse range of potential applications. For example, composites with heat induction capabilities could be used for externally-activated but locally-induced hyperthermia treatment (i.e. exposing cancerous regions to elevated temperatures (~43°C) that will lyse the more temperature sensitive cancer tissues while being safe for normal tissues1) and/or as scaffolds for the delivery of therapeutic agents. Alternatively, thermosensitive drug delivering agents, such as micelles or microgels, could be incorporated into these scaffolds to allow for externally controlled drug release.2 Such treatments may be combined into a single device to further increase the efficacy of treatment. Consequently, stategies involving heat inducting,  thermosensitive composite materials utilizing magnetite nanoparticles in alternating magentic fields (AMF) have been widely pursued in recent years.

While many polymer-magnetite composite materials have been fabricated before, few are able to be directly injected to the desired site of interest with the hydrolytically-degradable crosslinks that are formed immediately after injection. The development of injectable materials that can provide similar release profiles to currently reported, macroscale-systems3,4 would be highly beneficial to expand the potential applications and patient convenience of such devices. The further ability of these composite materials to degrade allows for the clearance of their comprising compontents from the body over time.  Additionally, while most currently reported systems physically entrap the magnetite nanoparticles in a hydrogel matrix, by functionalizing the surface of the nanoparticles so that they also participate in the gelation process, the rheological properties of the final composites may be significantly altered, leading to exceptionally strong or elastomer-like hydrogels with unique properties and other potential applications (e.g. embolic or structural biomaterials). In response, this work describes the fabrication of novel thermosensitive, injectable, covalently-cross-linked, stimuli-responsive hydrogels in which one of the polymers used to form the hydrogel is physically adsorbed to magnetite nanoparticles.  The hydrogel composites are characterized for their rheological and degradation properties, biocompatibility, and drug delivery properties. 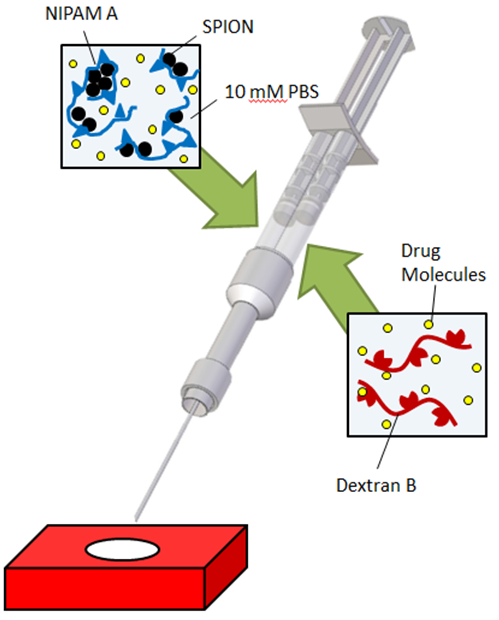 Figure 1: Hydrogel fabrication process. The double-barrel; syringe has two compartments: one with hydrazide functionalized NIPAM and the other with aldehyde functionalized dextran in PBS solutions. Upon injection, these two solutions mix and hydrazone bonds form in prefabricated moulds.

The hydrazone crosslinks that form will hydrolytically degrade over the course of several months under physiological conditions.5 The PNIPAM component of the hydrogels is thermosensitive such that the hydrogels reversibly decrease in size when the temperature of their environment exceeds their lower critical solution temperature (LCST).7 The magnetite nanoparticles can generate heat when placed in an AMF via hysteresis losses.1 When the thermosensitive hydrogel and magnetite nanoparticles are combined in the same nanocomposite, heating of the nanoparticles induces a phase transition in the NIPAM component, which will cause the hydrogel to deswell and release a burst of pharmaceutical agents. Site-specificity is achieved by injecting the composite at the desired site, where it quickly gels in vivo using the rapid hydrazide-aldehyde chemistry. The thermosensitive nature of the hydrogel can be adjusted, along with numerous other parameters (for example, the degree of functionalization and the concentration of hydrogel precursor polymers, the phase transition temperature of the polymer precursors via copolymerization, etc.) to attempt to control the rate of drug release and the on-demand control of drug release under the presence of an AMF.

RESULTS: Stable, injectable, mechanically robust hydrogels were successfully formed with 2-10 wt% aldehyde-functionalized dextran content. The dried gels range from 70-75% iron oxide based by mass, relating to hydrated gels that have 10 - 22 wt.% iron oxide content. The hydrogels themselves have shear storage moduli orders of magnitude greater, and elasticities significantly greater, than conventional hydrogel materials, behaving on a bulk scale more like a conventional elastomer than a hydrogel (Figure 2). 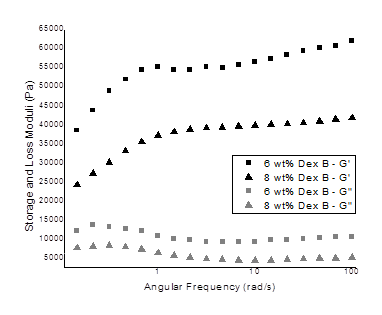 Composites have been designed that are also able to be quickly broken apart under the application of an AMF, likely due to their lower crosslink density than conventional gels and the thermal motion of the  magnetite nanoparticles under an AMF. These hydrogels could be used in alternate applications, such as a blood stopper in surgeries that can be broken apart after the operation is completed and as a quick supply iron source for the body. Drug-loaded hydrogels that are more stable under the presence of an AMF have also shown high-low release characteristics upon applications of short 5-10 minute pulses of an AMF (Figure 3). Increases in drug release when the AMF is applied may be partially attributed to the induction-enhanced degradation of the hydrogel itself. Additionally, the performance of these composites in cell viability assays will be discussed. 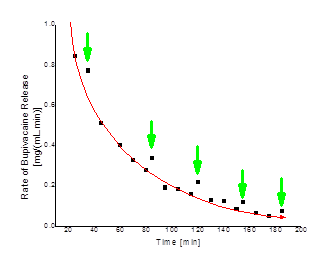 Figure 3: Rate of bupivacaine drug release under pulsed AMF conditions. The red line represents release without the application of an AMF, while the green lines indicate the enhanced rate of release after 5 minutes of applied AMF.

CONCLUSIONS: The combination of thermosensitive polymers with magnetite nanoparticles is a powerful tool in the fabrication of composites for therapeutic purposes. The injectable and externally-triggerable drug delivery composite material described herein offers significant advantages over many current therapies in terms of facilitating triggered changes in the composite properties using a patient-friendly and non-invasive triggering technology.

ACKNOWLEDGEMENTS: This research is funded by the Natural Sciences and Engineering Research Council of Canada (NSERC) and the J.P. Bickell Foundation (Medical Research Grant).

Extended Abstract: File Not Uploaded
See more of this Session: Magnetic Nanoparticles in Biotechnology and Medicine I
See more of this Group/Topical: Nanoscale Science and Engineering Forum