RezaAsgharzadehShishavan and John D. Hedengren Department of Chemical Engineering Brigham Young University
Environmental regulations restrictthe allowed amount of pollutant gases emitted to the surrounding environment. Thermal Oxidizers (TO)are of paramount importance indestroying organic pollutant compounds in waste streamsof low heating value. This capability has increasedthe use of TOs in many chemical plants which in turnhas raised the importance of developing more precise and robustdynamiccontrol systems for these reactors.
In this work a thermal oxidizer was modeled dynamically using both empirical and first principles models. Next,Advanced Process Monitoring (APM) software[1] which is available online and has found applications in many downstream,upstream,and chemical industries [2-3]was utilized to implementthe nonlinear Model Predictive Control (MPC) algorithm as the control strategy on the system.Nonlinear MPC is based on determining the best manipulated variable control action using optimization techniques and a nonlinear model of the process. In estimation mode, APMattempts to optimally estimate the true state of the dynamic system, given a real-time stream of measurements and a model of the physical process.
MPC has been applied to numerous systems[4] but none of these studies have focused on implementing nonlinearMPC on a TO system. The complex nature of the combustion reactions have made it challenging to model and control the thermal oxidation. Part of the control challenge is due to the combustion reactions that are very sensitive to changes in temperature. For example, a100°C increase in temperature can make the reaction rateconsiderablyfaster than its original value and drastically changes the characteristics of the process response.
Because of the inherent complexity of dynamic control systemsit is not feasible to use a more detailed combustion model with all potential chemical species and at the same time get a fast control decision. Likewise, using a detailed model can even lead to ahigher deviation of the predicted results from the measured ones as complexity does not always correlate to accuracy. Therefore, arelatively simple but practically demonstrated combustion mechanism was used as the basis for the model equations.This kinetic mechanism is restricted to the species of carbon monoxide, carbon dioxide, nitrogen, oxygen,water, and intermediate radicals.
As mentioned before, the TO model used in this work takes advantage of both first principles and empirical equations. The first principles model consists of material, species, and energy balances generally shown as

Because the Reynolds number in the TO chamber was found to be higher than 10,000, it can be assumed that there is turbulence inside the TO and the species are completely mixed in the radial direction[5]. Thusthe momentum balance is of much less importance than the material and energy balances.Moreover, average outlet concentration is of higher interest in industrial systems which excludes the need for detailed species profiles in the reactor. A momentum balance can be taken into account in design of TOs in order to increase the mixing and is of secondary importance for a control- relevant model.
An empirical reaction rate introduced by Howard et al.[6]was used for modeling the combustion reaction. The applicability of this equation has been demonstrated for the post flame combustion region which is suitable for the TO case.The simplified kinetic mechanism was determined after review of numerous experimental studies for a wide temperature range (840-2360 K). This reaction equation has also been considered as a valid expression for determining CO combustion rate in a TO by Cooper et al [7].
A schematic of the TO including manipulated and control variables is shown in Figure 1.

Excess air and the burner fuel flow rates were selected as manipulated variables while exit CO and O2 concentrations were assignedas controlled variables.Typical values of 0.1% and 0.01% were selected as upper and lower CO exit concentration limits while 3 and 10 % were used for lower and upper limits forO2exit concentrations, respectively. Allowable CO exit concentrations are determined by environmental regulations while anO2 lower limit of 3% was selected to insure excess oxygen and to avoid a reducing environment inside the TO[5].
The partial differential algebraic equation (PDAE) model of the thermal oxidizer system was first discretized in space and then in time. For the spatial discretization, the chamber was modeled as successive mixed flow reactors in which outlet of each CSTR reactor serves as the input for the next one. First, steady state modeling was performed and the result was used to initializethe dynamic control application.
Economiceffects were included in the optimization by adding a cost on the burner fuel flow rate. Fuel cost drives the controller to the maximum allowable CO and minimum O2exit concentrations. This behavior can be explained by considering that the lower CO exit concentration reflects the need for lower conversion which in turn requires less burner fuel flow rate. Moreover, lower oxygen exit concentration means less excess air is required to be mixed with the waste gas entering the TO which is equivalent toneedingless burner fuel to heat the incoming gas to the desired temperature. Figure 2 show the trends of manipulated variables and controlled variables respectively. 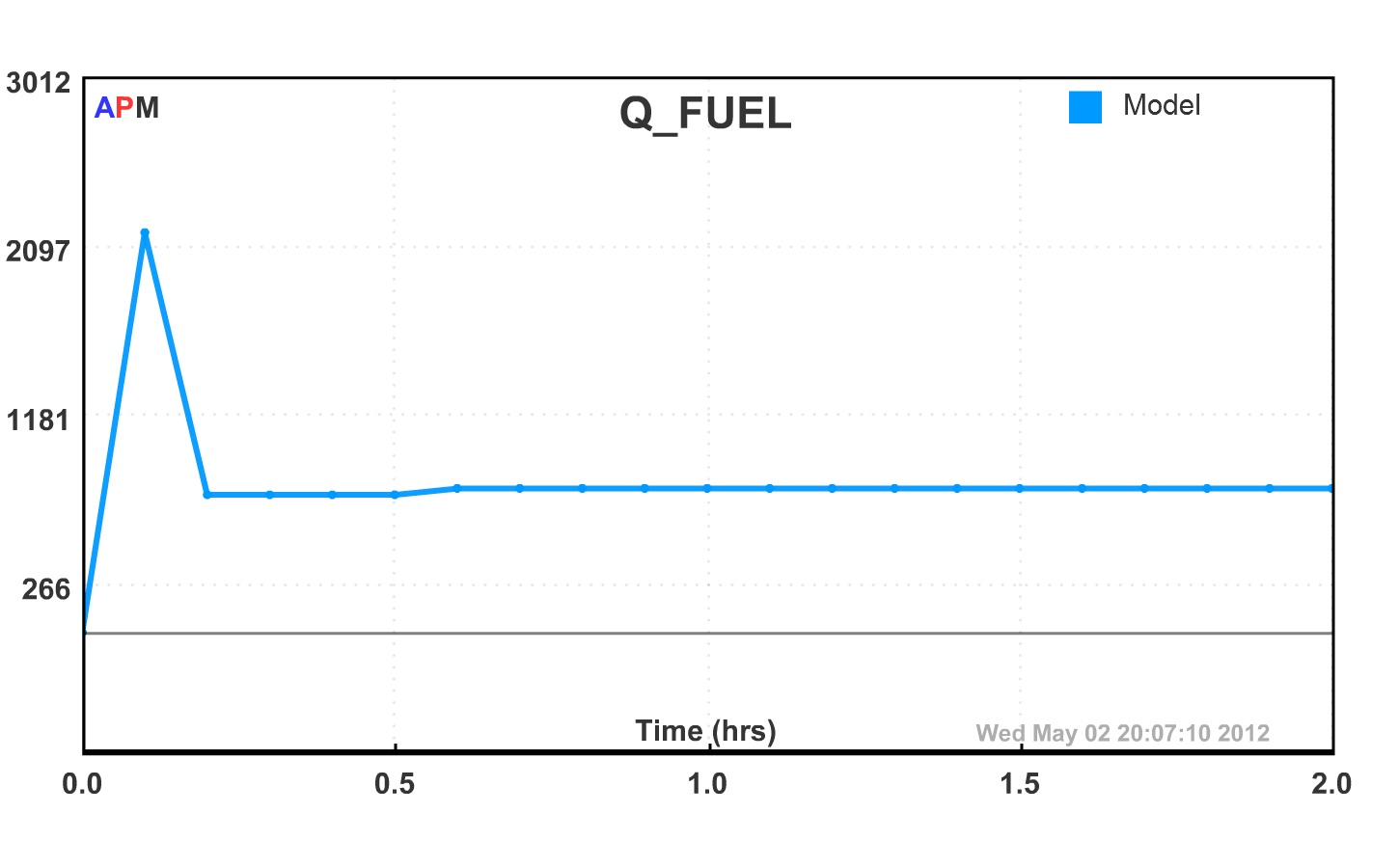 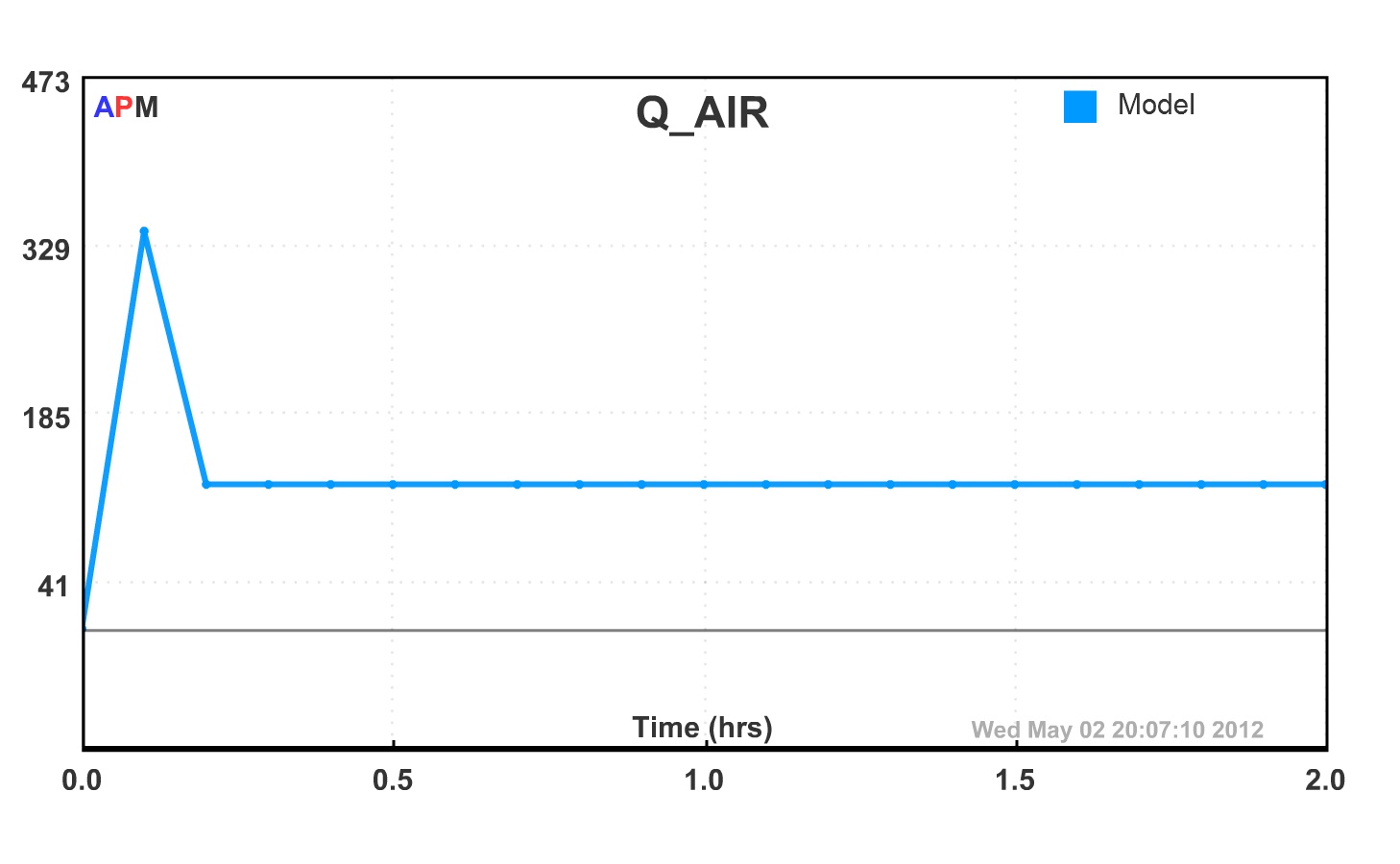 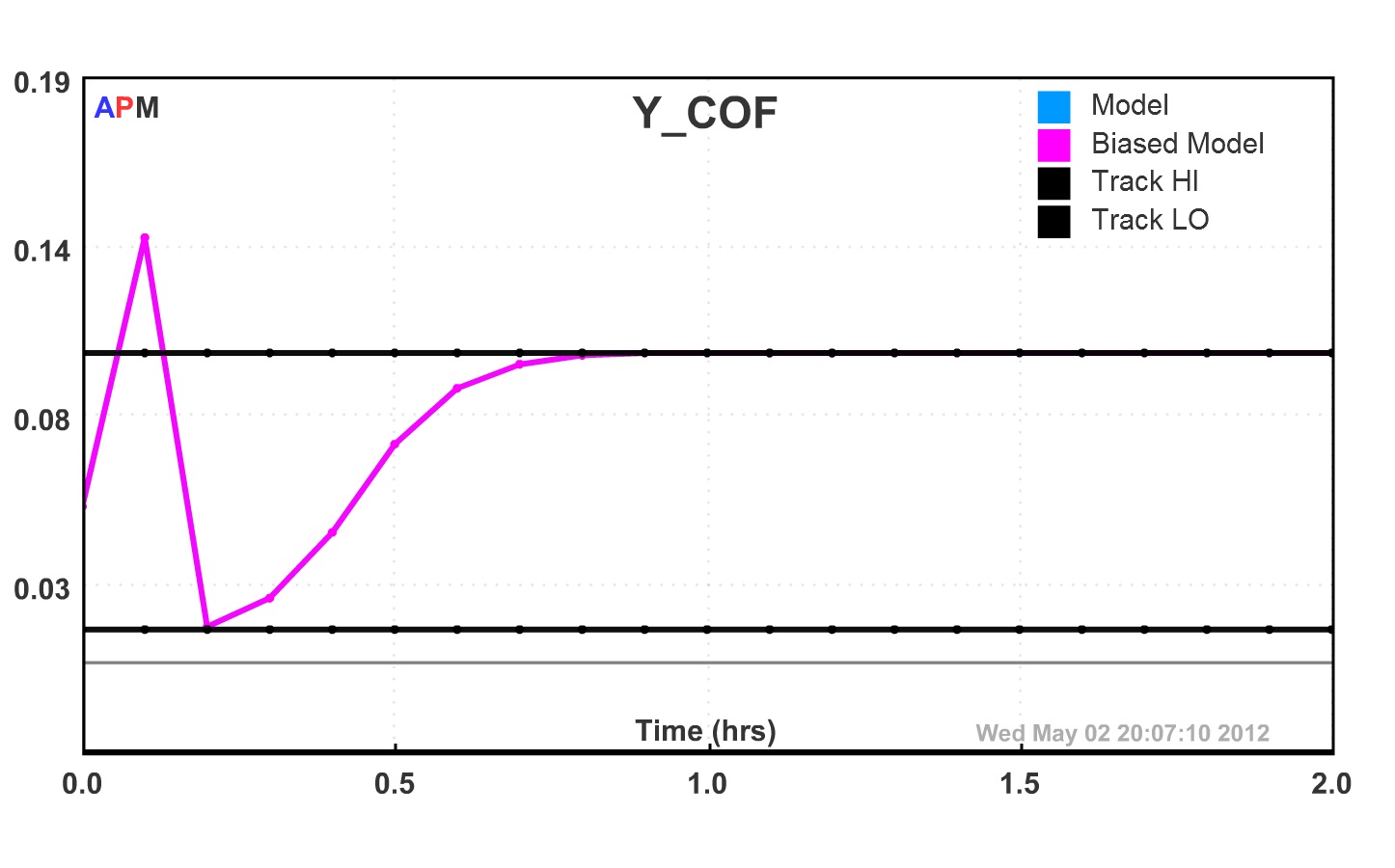 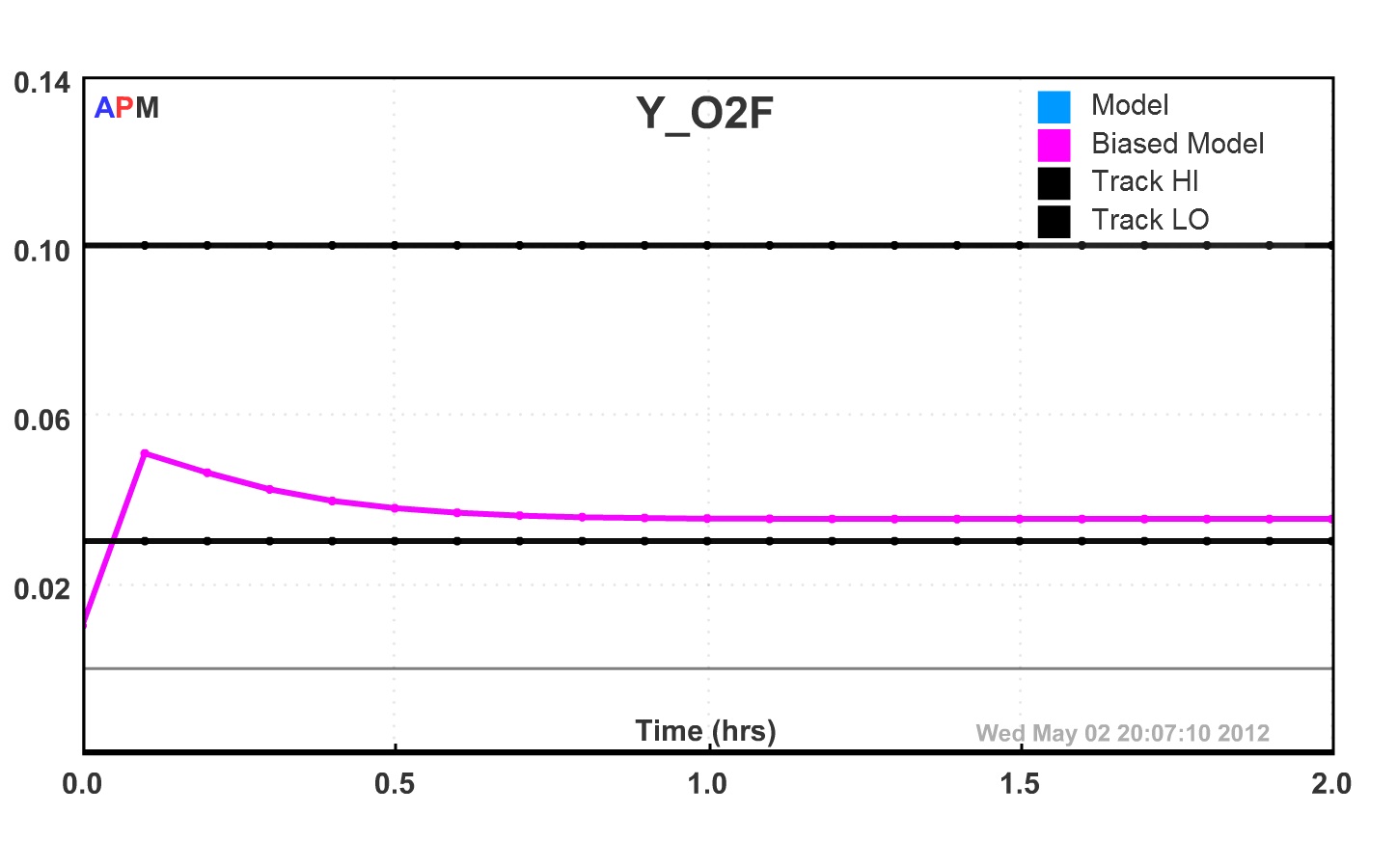 Figure 3 B: Trend of Oxygen exit concentration change
To check the validity of the simulation result,an attempt was made in comparing the steady state modeling results with empirical statistical equation results for COpresentedbyLee et al.[7]. in several temperature and reaction times.Lee et al. developed their model after conducting numerous experiments and reported this to be a precise method. Results showed good agreement between the current model results and the statistical analysis.Table 1 shows a comparison between the temperature required for 99% and 99.9% destruction efficiencies at the same residence times from both works.
Table 1. Comparison of Temperature required for destruction of CO to desired levels

Simulation results showed thatthe nonlinear behavior of the TO can be completely captured by the controller. Therefore, nonlinear MPC can be considered as an option of choice for controlling the TOs in practice. Nonlinear MPC control systems are more precise in adjusting the controlled variable to its set- point and can use less control actions to reach this goal compared to traditional PID or linear MPC controllers.
References
1. Hedengren, J., and Brower, D., Advanced process monitoring of flow assurance with fiber optics, in In AIChE Spring Meeting. 2012.
2. Hedengren, J., Optimization and Analytics in the Oil and Gas Industry. Springer-Verlag Berlin
Heidelberg, ch. Advanced Process Monitoring , p. submitted., 2012.
3. Brower, D., et al. in The 31st International Conference on Ocean, Offshore and Arctic Engineering