Recently proposed electric double-layer capacitors with electrodes of aligned, single-wall carbon nanotubes can have capacitances exceeding conventional EDLCs.1 They offer possibilities for deliberate nanoscale mechanical and chemical design. The natural goal for such capacitors would be to achieve energy densities comparable to those of current battery systems, but also to retain the traditional advantages of capacitors, namely faster response and longer cycle lifetimes.2

An important start in developing a molecular understanding of EDLCs based on nanotubes forests has been made on the basis of classical molecular simulations.2 Nevertheless, some characteristics of particular interest are intrinsically quantum mechanical in nature; chemical damage and quantum (or more properly intrinsic) capacitances3 are examples of such characteristics. Ab initio molecular dynamics (AIMD) are thus an essential step in the development of a molecular understanding of these systems.

Here we present electronic structure results, and AIMD simulation, on non-neutral systems of carbon nanotubes (CNTs) and molecular ions, including the tetra-methyl ammonium ion. Traditional electronic structure calculations show that CNTs prefer negatively charged states. In contrast, AIMD (utilizing the CPMD package) shows substantial charge transfer to a tetra-methylammonium cation in contact with a carbon nanotube. The system studied (below) includes 80-carbon-atom nanotube and one tetra-methylammonium cation, with periodic boundary conditions in all three spatial dimensions, and utilizes the PBE-D electron density functional model, a norm-conserving pseudo-potential (NCPP), and a plane-wave basis cut-off of 85 Ry. The charges on the ion (right below) for nine different configurations, chosen from a high temperature AIMD trajectory, depend substantially with the distance from the CNT, indicating charge transfer between the ion and CNT. 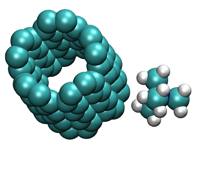 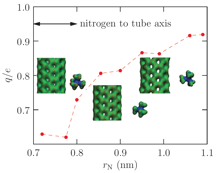 We further investigate the interactions involving other ions essential for modeling these systems, including tetraethylammonium (cation), tetrafluoroborate (anion), singly and in combination.  Finally, we will consider non-neutral charge states for the CNT electrode material.