Renewable jet fuel for the aviation industry, also termed bio-jet fuels could reduce flight-related greenhouse-gas emissions by 60 to 80 percent compared to fossil fuel based jet fuel. The green bio-jet fuel is made by blending microalgae bio-fuels with conventional petroleum-derived jet fuel to provide the necessary specification properties. The major advantage of using microalgae oil for biodiesel is the high oil production capacity by microalgae, as they could produce up to 58,700 L oil per hectare.

Sustainable production of bio-jet fuel requires minimizing the energy requirements and reducing fresh water usage while simultaneously lowering the production cost of bio-jet fuel. These are challenges to the biodiesel production from microalgae. Considerable efforts have been made to develop efficient and cost-effective photobioreactors for microalgae growth. Yet, the high cost of installing and operating artificial light sources in conventional photobioreactors with artificial illumination systems remains a major problem.

The goal of this research is to develop an economical process to produce bio-jet fuel while minimizing the energy requirements, reducing water usage and meeting the jet fuel specifications. To accomplish this goal the following objectives were defined. 1- Investigate minimizing the energy requirements by replacing fluorescent lights with light emitting diodes (LEDs); 2- Investigate the use of municipal waste water in growing microalgae to reduce fresh water usage; 3- Study the one-step production of biodiesel using in situ algal biomass transesterification process to reduce production time and cost, and 4-investigate biodiesel blending with jet-fuel in order to obtain bio-jet fuel that has specific properties.

LEDs are lighter than the fluorescent lights and small enough to fit into virtually any photobioreactor (PBR). Other advantages of LEDs include a longer life-expectancy, lower heat generation, and a greater tolerance for switching on and off. LEDs use less electric energy than fluorescent light to produce the same light intensity hence their use lowers the energy requirement for algae growth, and make the process greener by eliminating the CO2 emitted in generating the excess electric power needed for the fluorescent light.

There are three routes to produce bio-jet fuel from microalgae. Figure 1 shows these three routes. The first route involves using microalgae oil to produce Bio-SPK (Bio derived synthetic paraffinic Kerosene) by cracking and hydro-Processing. This can be used for kerosene-type fuels include jet A, jet A-1, JP-5 and JP-8. FT-SPK (Fischer–Tropsch Synthetic Paraffinic Kerosene) is the second route which involves pyrolysis of solid biomass to produce pyrolysis oil or gasification to produce a syngas which is then possessed into FT SPK. The third route involves algae growth, harvesting, oil extraction and transesterification or (in situ process) to produce biodiesel. The biodiesel will be blended with Jet fuel to produce bio-jet fuel.

One of the purposes of this research is to improve energy efficiency of the microalgae cultivation in photobioreactor by comparing LEDSs with fluorescent light sources, and the use of wastewater versus reverse osmosis (RO) water. Chlorella Vulgaris microalgae were grown in wastewater and in RO water. Two LED color panels were used for this comparison: a red panel and a red-blue Panel. The measured light intensities were maintained at a value of 2000 Lux. The absorptivity and the cell counts measurements were recorded while the algae were growing using the spectrophotometer and the microscope. Then, the algae were harvested after the maximum growth was reached. The biomass freeze dried algae were determined after centrifugation and freeze drying processes. Research is still progressing towards production of biodiesel through the in situ process and production of bio-jet fuel. 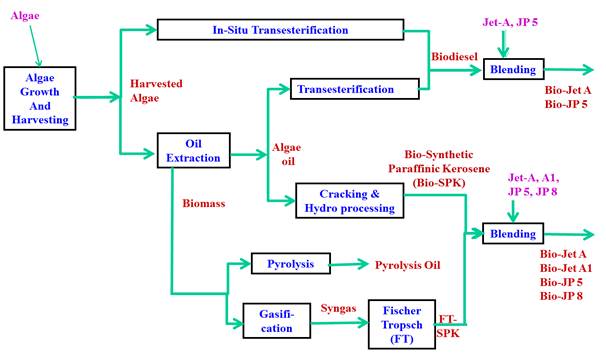