Future world energy needs necessitate the search for alternative and sustainable energy sources.  Biodiesel is one such source with many upsides, but current production methods are flawed. Existing large scale biodiesel production facilities rely primarily on soybean and canola oil as the lipid source for the biodiesel. The production of soybean and canola oil directly competes with food crops and is not viable in the long term as a transportation fuel lipid source.

The problem with Algae as a lipid source for biodiesel is the cost of dewatering of the cells. Algae concentrations in the best conditions in bioreactors will not surpass 20 g/L due to light limitations. The water must be removed before the lipids can be used in the transesterification process that produces the biodiesel.  Typical methods for dewatering the algae involve using settling ponds to concentrate the algae a little and then using centrifugation to do most of the dewatering. The costs of this centrifugation step limit the commercial viability of algae based biodiesel.

A patented a novel gravity settler design at Cleveland State University, see Figure 1, is analyzed in this study. Preliminary results obtained with this design show promise to help the commercial viability of the algae biodiesel process by lowering the dewatering costs. The inlet of the gravity settler is at the top unlike traditional gravity settlers which have intakes at the bottom. Two prototypes have been tested and experiments indicate that the technique is effective at dewatering algae. 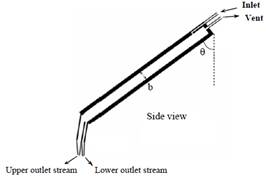 In order to benefit the design process, a computational fluid mechanics model for the system has been developed using a finite element based multi-physics modeling environment (COMSOL, formerly known as FEMLab). This study shows how the powerful environments of a detailed CFD modeling interfaced wiht a commercial CAD software can be used to optimize the design of gravity settlers. Comparative studies carried out with alternative designs and results from validation experiments are presented.

The model formulation is based on the mixed model. The mixture (or mixed) model considers a system where there is a dispersed phase of either solids or liquid droplets/bubbles in a continuous liquid phase. It was developed for hard spherical molecules, so some adaption is required to correctly model algae cells which can clump and deform, these modifications will be discussed.

The geometrical model has been developed based on the simplified geometry of the gravity settler shown in Figure 1. After validation experiments are completed and results with simplified relations for settling velocities are evaluated, the simulation environments is to be updated to the more advanced geometry of the prototypes by means of SolidworksÛ and COMSOL LiveLink for SolidworksÛ. This LiveLink enables to import complex geometries into COMSOL as well as formulation of parametric studies where the CAD software is used to interactively modify geometric parameters that may show relevance in the performance of the settler. SolidworksÛ parameters can also be used in COMSOL to perform parametric sweeps.

Using this LiveLink functionality, parametric sweeps will be demonstrated as tools to optimize the settlers design and operation by analyzing geometric (such as length, angle of inclination, and height for dewatering) as well as operating variables (such as inlet and outlet flow rates and velocities).The optimized design will be physically prototyped and experimented on to validate the CFD modeling.