A food waste and paper-cardboard waste blend was used to evaluate the H2 production using a mixed microbial community.  At a feed concentration of 10 g COD/L, the maximum H2 production (34±1 mL/g COD) was observed for linoleic acid (LA) treated cultures.  The microbial diversity data showed that Methanosarcina sp. was dominant in the 5 g/L COD untreated culture.   In comparison, methanogens were inhibited and the dominant populations were Lactobacillus sp. and Clostridium sp in the LA treated cultures fed with 10 g/L COD of the blended filtrate (food plus paper cardboard waste).  For the LA treated cultures fed with 5 g/L COD and 10 g/L COD, the H2 yield were statistically the same.

Urban waste management is a key global concern because of environmental concerns such as local pollution issues and green house gas emissions.  According to 2010 data from the United States Environmental Protection Agency (USEPA), the estimated annual production of municipal solid waste (MSW) in the United States (U.S.) was 250 million tonnes with approximately 136 million tonnes (54.2 %) sent to landfills.  Conventional landfilling practices are unsustainable because it leads to the production of leachate and uncontrolled greenhouse gas emissions.  The organic fraction of MSW (OFMSW) in landfills is a large renewable energy asset.  OMSW can be converted into renewable fuels such as hydrogen and ethanol using bioprocessing technologies.  Developing bioprocesses to produce fuels and chemicals from OMSW will reduce the environmental pollution impact and add-value to a waste product.   Optimizing conditions to extract free sugars and minimize the formation of microbial inhibitory byproducts from treating OMSW using different technologies is challenging.  In the proposed work, steam explosion is used to extract free sugars from a synthetic OMSW and paper cardboard waste.

Degrading a food waste plus a paper-cardboard blend by mixed anaerobic communities into H2 and methane was assessed at 37ºC, at a pH set at 5.5 and different organic concentrations.  The characteristics of municipal food waste from collection facilities are variable; hence, a synthetic food waste was prepared to minimize compositional variation. The waste was prepared based on unused portions of food pieces which consisted of protein, carbohydrates, vegetables and fats. The diet composition was in accordance with the Canada Food Guide (CFG, 2007) and thus, it was representative of Canadian kitchen waste.  The paper and cardboard slurry samples were prepared using 50 g paper and 50 g corrugated cardboard in 1.5 L water.  The solid waste samples were liquefied using a domestic food blender and water was added to prepare a slurry. The slurries were divided into three portions of which two were heated in a steam explosion reactor in batch mode with a working volume of 1 L. The two portions were heated separately for 1 h at 160ºC, 180ºC and the third portion not heat treated.

Because of inhibited microbial growth, decreasing H2 production was detected in cultures not treated with LA but fed with the steam explosion samples treated at 180 oC and containing higher furfural concentrations.  According to Modig et al. (2002), furan derivatives are known to inhibit many metabolic pathways. The higher concentration of furan derivatives in the samples treated at 180ºC can behave as inhibitors and decrease the H2 yield.  The lower COD content of 4.46 g COD/L for the paper-cardboard waste treated at 160ºC was unable to produce a maximum H2 yield (Ginkel et al., 2001). To eliminate the inhibitory problem, a compromise option was developed by blending the food and paper-cardboard waste treated at 160ºC to enhance the H2 production potential.  This blend was used as a feedstock for the anaerobic cultures.

Mixed microbial anaerobic cultures at an initial pH value of 5.5 and at 37 oC were treated with linoleic acid (LA) and without LA and fed with the filtrate blend to assess their H2 producing capacity.  For the untreated cultures fed with 5 and 10 g COD/L of the blend, the H2 yield reached 8.9±1 and 17±2 mL/g COD, respectively. In comparison, when the cultures were treated with LA and 5 and 10 g COD/L of the steam exploded samples, the H2 production was 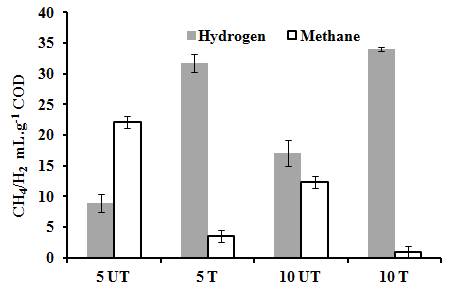 Fig 1. Biohydogen and methane production potential of both treated and untreated cultures

The optimum COD concentration for higher H2 production (34±1 mL/g COD) was observed at a feed concentration of 10 g COD/L.  Microbial diversity data showed that Methanosarcina sp., a methanogen, was the dominant microbial population in the 5 g/L COD untreated culture.   In comparison, in cultures fed with 10 g/L COD of the blended filtrate (food plus paper cardboard waste) and treated with LA, methanogens were inhibited and the dominant populations were Lactobacillus sp. and Clostridium sp.  The H2 yield were statistically the same for the LA treated cultures fed with the two different COD concentrations (Figure 1).