Introduction: The ability to discriminate between healthy and diseased endothelial cells (ECs) via cell adhesion molecule (CAM) expression will have significant impact on the design of vascular-targeted imaging and drug delivery vehicles for treatment of several diseases. However, EC behavior under chronic inflammation has yet to be fully understood due to the use of complex in vitro models that fail to simulate actual physiological inflammation conditions – wherein the combined effects of chemical and mechanical stimulus are simultaneously present. Work done by this group showed previously unreported patterns of E-selectin CAM expression on EC exposed to shear-interleukin-1β (IL-1β) co-stimulation; in this report, human umbilical vein EC (HUVEC) exposure to combined fluid shear stress and tumor necrosis factor α (TNFα) is investigated.

Materials and Methods: HUVEC sources were harvested from fresh cords and subcultured for no more than two passages. HUVEC monolayers were prepared and subjected to 0 or 12 hrs of shear stress imparted by fluid flow in a parallel plate flow chamber prior to simultaneous exposure to shear-cytokine stimulation. This pre-shearing period preconditions the mechanically-sensitive cells to a phenotypic state mimicking physiological profiles. IL-1β and TNFα were used in the subsequent stimulations (individual and combined) to simulate EC exposure to inflammatory chemicals. To determine HUVEC response, E-selectin (E-sel) – the hallmark CAM expressed during inflammation – was measured via immunofluorescence microscopy.

Results and Discussion: We found that like activation with IL-1β, the response of HUVECs to co-stimulation with fluid shear and TNFα is dependent on the shear history and the time frame of the following shear-cytokine activation. The presented data (Fig. 1) suggests that fluid shear differently affects IL-1β and TNFα signaling –prolonged exposure to high laminar shear prior (preconditioning) to cytokine-shear stimulation elicits muted E-sel response for TNFα activation (clear bars in C versus A) whereas response to IL-1β (filled bars) is enhanced (Fig. 1B) or muted (Fig. 1C) depending on the length of shear-cytokine stimulation post-preconditioning. 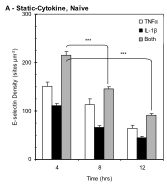 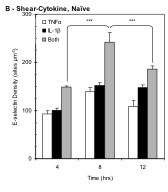 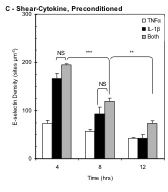 Figure 1. E-sel site density of combined and individual TNFα or IL-1β activation. HUVEC monolayers were treated with 10 ng/mL TNFα (clear), 0.1 ng/mL IL-1β (filled), or simultaneously with both cytokines at the same concentrations (grey) for up to 12 hrs under (A) static-cytokine  and shear-cytokine (10 dyn/cm2) activation of (B) na•ve cells and (C) 12 hrs preconditioned monolayers.