Hydrogels have found widespread applications in the area of controlled release of bioactives since they can be typically be loaded with high fractions of drugs (due to their high internal free volume) and can be fabricated to have similar physical, mechanical, and chemical properties to native extracellular matrix, generally promoting high biocompatibility[1].  However, conventional, single-phase hydrogels suffer from two key limitations from a drug delivery perspective: (1) their high elasticity coupled with their macroscopic dimensions make them difficult to administer via injection and (2) the highly hydrated microstructure results in poor hydrophobic drug uptake[2] and rapid release of hydrophilic drugs[1, 3], limiting both the types and the rates of drug release that can be achieved.  While a range of physical and chemical in situ gelation approaches compatible with physiological conditions have been reported to address the issue of hydrogel administration in vivo, long-term release of hydrophilic drugs remains a challenge, with few formulations reported to achieve release durations for greater than one month.[3]

In order to address this problem, a range of multi-phase hydrogels has been developed in which a variety of nano or micron-sized drug carriers (for example, liposomes[4], polymer nanoparticles[5] or polymer microparticles[6]) are physically entrapped inside hydrogels. Relative to single phase hydrogels, the incorporation of a second (and, in most cases, significantly different) embedded discrete phase can introduce affinity sites that facilitate increased loading of a target drug as well as additional diffusive and/or partitioning barriers to tune the release of that drug through the bulk hydrogel phase, leading to longer-term release.

In our work, we aim to fabricate very well-defined multi-phase hydrogel-microgel systems and investigate how both the magnitude of burst release (typically observed for hydrogel-based systems) as well as the duration of effective release can be tuned by rational engineering of the chemistry and morphology of each individual phase.  Specifically, we investigate the effects of tuning the degree of anionic functionalization, the cross-link density of the microgel, the concentration of reactive groups in the microgel or hydrogel, and the degree of cross-linking observed between the microgel and bulk hydrogel phases on drug delivery, using bupivacaine, a cationic local anesthetic, as a model drug.  The embedded phase chosen was copolymer microgels based on N-isopropylacrylamide (NIPAM) and acrylic acid (AA); such microgels exhibit thermosensitive swelling responses (~32oC) and have both ionic and hydrophobic affinity for promoting bupivacaine binding. The microgels were immobilized within a hydrogel network which is liquid outside the body but gels via covalent cross-linking (using hydrazide-aldehyde chemistry) inside the body by simple co-injection to form in situ gellable hydrogel-microgel networks. Microgels can be simply physically entrapped within a bulk hydrogel or they can be covalently cross-linked into the hydrogel matrix by functionalizing the microgels with hydrazide groups to allow them to participate in the cross-linking reaction.

Acrylic acid functionalized poly(NIPAM) microgels were synthesized via a mixed precipitation-emulsion polymerization according to methods by Pelton[7]. Varying amounts of acrylic acid (6mol% - 20 mol%) and  N,N'-methylenebisacrylamide cross-linker ranging from 1 to 9 mol% total monomer were incorporated into the microgels to determine the effect of microgel functionalization and cross-linking on bupivacaine release from the nanocomposites.

Hydrogels were fabricated from carboxymethyl cellulose (CMC) and dextran modified with hydrazide (CMC-A) and aldehyde (Dex-B) functional groups, via previously reported methods[8]. Hydrazide attachment to CMC was facilitated via EDC/NHS chemistry, whereas aldehyde modified dextran was synthesized via sodium periodate oxidation. When mixed via co-injection through a needle, these two polymers rapidly form a hydrazone-cross-linked hydrogel network that physically entraps AA-NIPAM microgels inside the hydrogel network. Incorporating microgels into the hydrogel mixture prior to gelation created the nanocomposites. Hydrazide-functionalized AA-NIPAM microgels were synthesized using a similar protocol to determine the effects of covalent microgel attachment to the hydrogel matrix on drug release from the nanocomposites.

Drug release from the composite hydrogels was analyzed using a transwell plate technique and quantified using UV/VIS spectrophotometry. The mechanical properties of the nanocomposite was assessed through parallel plate rheometry. Cytotoxicity was assayed with the MTT assay, using fibroblasts and myoblasts as model cells.

The release of bupivacaine can be sustained for up to 60 days using these nanocomposite hydrogels, significantly longer than that achievable using the constituent hydrogel or microgels alone (less than one week in either case, Figure 1)[9]. 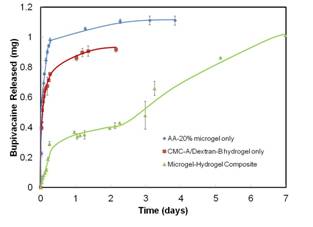 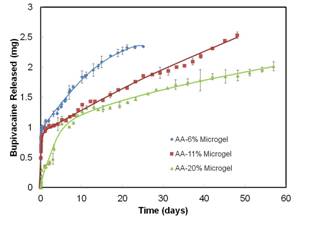 However, the magnitude of microgel deswelling relative to the hydrogel at physiological temperature also has a strong impact on drug release. When varying amounts of cross-linker were incorporated into the microgels, microgels with higher cross-linker contents facilitated slower drug release from the nanocomposite system.  Of particular interest, when hydrazide-functionalized microgels were used to covalently cross-link the microgels to the hydrogel phase, significantly slower drug release was observed (Figure 3).

In this case, increased network elasticity restricts or eliminates the microgel phase transition, resulting in lower convective transport of drug from the nanocomposite hydrogel and slower overall release rates. Additional control of drug release from the nanocomposites can be afforded by altering the cross-link density of the bulk hydrogel phase, which regulates both drug diffusion and hydrogel degradation; however, this effect was less significant than that provided by manipulation of the embedded phase.

Rheological tests were performed to determine the impact of microgel entrapment and cross-linking on the mechanical properties of the hydrogels. The elastic modulus of the hydrogels increases as a function of the degree of hydrazide functionalization of the CMC-A polymer, consistent with more highly functionalized pre-polymers creating more highly cross-linked hydrogels.  In this way, hydrogels with different cross-link densities (and thus pore sizes) can be generated via simple co-injection of CMC-A polymers with different hydrazide contents. The incorporation of microgels into the hydrogels does not significantly alter the mechanical properties of the nanocomposite. However, when the microgels are functionalized with hydrazide groups, the elastic modulus of the nanocomposites significantly increases with degree of microgel functionalization, with G' values doubling relative to those measured with the same bulk hydrogel that contained only entrapped microgels. This indicates that the microgel actively react with aldehyde functionalized polymers and participate in the cross-linking of the hydrogel phase.

The composite hydrogels, hydrogel pre-polymers, and microgels all showed no significant cytotoxicity to fibroblasts or myoblasts at concentrations up to 2mg/mL according to the MTT assay.

Drug release from microgel-hydrogel nanocomposite systems can be precisely tuned through the modification of microgel characteristics such as net charge, overall cross-linker content or covalent attachment of the microgel to the hydrogel phase. In both cases, changes in microgel swelling/ deswelling behavior lead to tunable changes in the observed drug release kinetics, significantly prolonging release versus other hydrogel systems previously reported.  In particular, by regulating the relative swelling of the bulk and entrapped gel phases via molecular design (composition and cross-link density), both burst releases of drug as well as overall release rates of drug can be significantly slowed.  The results of this work could in principle be applied to any drug to achieve similar prolongations in release, provided that a drug-microgel affinity pair can be identified.

<>Funding from the Natural Sciences and Engineering Research Council of Canada (NSERC) and the Ontario Ministry of Research and Innovation (Early Researcher Award program) is gratefully acknowledged.