For small and medium scale processes, the group of micro- and mini-reactors has proven to be a viable solution for multiphase processes due to high mass and heat transfer rates. For heterogeneous catalyzed gas-liquid reactions, there are two options to fix the catalyst inside the reactor: a) coating of the channel wall (e.g. monolith catalysts) and b) a catalyst packing (mini fixed-bed). Thereby, a reproducible and long-term stable coating of long channels is quite challenging. On the other side, the packing of micro- and mini-reactors with commercial and industrial tested catalyst spheres and extrudates is relatively easy [1].

The mini fixed-bed reactors can be found in particular in the field of catalyst-screening of solid catalysts with a size of a few millimeters for conventional large scale fixed-bed reactors. They show a similar hydrodynamic behavior like the large scale unit and can therefore be used efficiently to study the kinetic of catalyst particles [2]. By using this technology, operation costs can be saved and the setup complexity as well as the experimental time is reduced [3]. However, for catalyst screening it is important to guarantee the absence of external mass transfer limitations, which would affect the results drastically.

Numerous investigations concerning hydrodynamics in these reactors show, that in particular the channel-to-particle-ratio (dch/dp) has a significant influence on flow pattern, residence time distribution and pressure drop [2]. Until now, there is only less information about mass transfer in these mini fixed-bed reactors.

Aim of this work is the investigation of mass transfer characteristic of a mini fixed-bed reactor using the palladium catalyzed hydrogenation of α-methlystyrene (AMS) to cumene. In particular the influence of flow pattern, superficial gas and liquid velocities (0.002 ms-1< uG,S < 1,2 ms-1, 0.005 ms-1< uL,S < 0,2 ms-1) and gas ratio at the reactor inlet (εG= 0,25; 0,50; 0,75) on overall mass transfer coefficient is examined.

The mini fixed-bed reactor consists of an inert, pressure-resistant round capillary (dch= 2.0 mm) being filled with a bed of 400 spheres (5 wt.% Pd/Al2O3, dp= 0.8 mm). The distribution of spheres is limited by two regular arrangements of spheres which are shown below in figure 1 for dch/dp= 2.5 under the consideration of a package of mono dispersed catalyst spheres.

The reactor is embedded in a pilot plant that is equipped with mass flow controllers to provide the hydrogen, a pump for the reaction mixture (20 wt.% AMS in cumene) and a temperature and pressure control. All experiments are carried out in down-flow mode.

The mass transfer of hydrogen from the gas phase through the liquid to the catalyst particles is calculated by measuring the consumption of AMS between inlet and outlet of the reactor.

The surface concentration of hydrogen cH2,SAT can be calculated by knowing the intrinsic kinetic constant kint of the used catalyst and accordingly the following equation is obtained.

With this equation the overall mass transfer coefficient of hydrogen can be calculated by the conversion of AMS, if it is ensured that the reaction is external mass transfer limited.

For identifying an external mass transfer limitation, the variation of reaction temperature is an appropriate method. Figure 2 shows the conversion of the liquid AMS (left side) and the Arrhenius plot (right side) in dependence on reaction temperature.

It can be seen that the conversion of AMS rises linearly until a temperature of T= 353 K due to the effect of pore diffusion in the porous catalyst, which can be explained by the reduced apparent action energy of Eapp2= 24 kJ mol-1 instead of Eintr= 37 kJ mol-1 for a kinetic limited reaction. At higher temperature the conversion of AMS almost stagnates indicating a further external limiting step. According to this, the setup is applicable to measure mass transfer coefficients.

An investigation of the influence of the gas-to-liquid ratio at the reactor entrance reveals that the conversion of AMS decreases with rising two-phase velocity for all gas ratios due to the shorter residence time. The conversion increases with elevated gas ratio in the whole range of two-phase velocities. This effect is quite reasonable due to the smaller amount of liquid molecules entering the reactor. The mass transfer coefficient increases with elevated two-phase velocity showing that the effect of raised mass transfer is more pronounced than the shortened residence time with increasing gas velocity. Interestingly, the curve of a gas ratio of 0.75 crosses the two other curves in two points, as illustrated in figure 3. 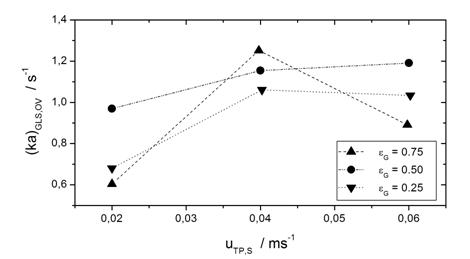 This effect must have its origin in hydrodynamics of the gas-liquid two-phase flow. In figure 4 the flow map of the applied system is shown. 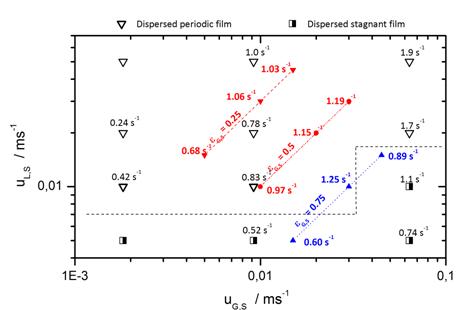 It is obvious that the three experiments with a εG= 0.75 are possibly located in different flow regimes. If additionally anticipating kaGLS,OV values from the investigation of the effect of superficial gas and liquid velocity, the suspicion is confirmed easily. Only the mass transfer coefficients for uTP,S= 0.04 ms-1 can be compared with regard to the gas ratio, because these three points are in the same flow regime. It is obvious that with elevated gas ratio the mass transfer increases, which can be explained by a higher gas-liquid surface area. Since the mass transfer of dispersed periodic film is generally higher than in dispersed stagnant film, the values εG= 0.75 at uTP,S= 0.02 ms-1 and uTP,S= 0.06 ms-1 are lower than for the lower gas ratio.

In this work the influence of operations conditions on overall mass transfer coefficient of hydrogen in a mini fixed-bed reactor has been investigated. It is shown, that with higher superficial gas velocity the mass transfer (kaGLS,OV) increases due to larger gas-liquid interfacial area and higher interaction between the two phases. In contrast, a raised superficial liquid velocity would increase kGLS,OV too, but would decrease the interfacial area aGLS,OV. Therefore, superficial liquid velocity has only a marginal effect on mass transfer. Furthermore, it can be stated that mass transfer is dependent on flow regime, which characterizes the interaction between the two phases.