Plant polyphenols such as flavonoids and stilbenoids have been associated with several health benefits and thus have been widely studied in recent years. Despite the current controversy regarding their potential for pharmacological applications, recent studies suggest that natural phenols can be converted into active metabolites in vivo, and more attention is required on the in vitro synthesis of analogs to enhance their efficacy. Also, a constant growth of anti-microbial resistance and rapid microbial evolution underscores the importance of identification of alternatives to generate new and novel antimicrobial compounds.  We propose that the antimicrobial activity can be significantly enhanced by generating oligomers of these compounds. In particular, we produced, isolated and characterized a dimer from resveratrol (d-viniferin, the tri-dehydrodimer of resveratrol) from an in vitro enzymatic oligomerization reaction mediated by soybean peroxidase (SBP) in aqueous buffer. Dose response studies in gram-positive and gram-negative bacteria show great antimicrobial potential of d-viniferin as compared to resveratrol. For example, d-viniferin showed MIC and IC50 values of 125 µM and 59 µM respectively against E. coli (in the presence of efflux pump inhibitor Phe-Arg-ß-naphthylamide, PABN, 25 µg/mL), while resveratrol shows MIC and IC50 values of 2000 µM and 250 µM respectively. Significant improvement was observed against B. cereus with d-viniferin giving  MIC and IC50 values of 5 µM and 15 µM, while for resveratrol MIC and IC50 values were >150 µM, all in presence of the efflux pump inhibitor 1-(1-Naphthylmethyl) piperazine (NMP).

The significant increase in anti-microbial activity in presence of efflux pump inhibitor PABN in the case of E. coli indicated that efflux pumps are responsible for the extrusion of resveratrol and its analogs from the cell. Thus, d-viniferin was tested against an E. coli strain with a deletion of tolC gene (part of AcrAB-tolC efflux pump) in the presence and absence of PABN. In both cases, significant but similar growth inhibition was observed ([+]PABN, MIC and IC50 values were 1.2 and 3 µM respectively; [-]PABN, MIC and IC50 values were 2.5 and 7 µM respectively). Moreover, in the absence of PABN both the dimer and monomer had no effect on E. coli at these concentrations. The effect of efflux pump inhibitor on B. cereus was less significant; MIC and IC50 values in the absence of NMP were 12 and 30 µM respectively.

Visual evidence discarded the possibility of d-viniferin causing cellular aggregation leading to a lower cell density or count. Also, morphological changes in B. cereus were observed before and after incubation with d-viniferin; there was a decrease in the cell size while cell wall was found to be unaltered and intact.

In summary, it was demonstrated that novel and active antimicrobials from plant polyphenols can be generated in vitro. In particular, d-viniferin has shown great antimicrobial activity and its low toxicity against mammalian cells provides a new insight in the development of antimicrobial with potential therapeutic applications. 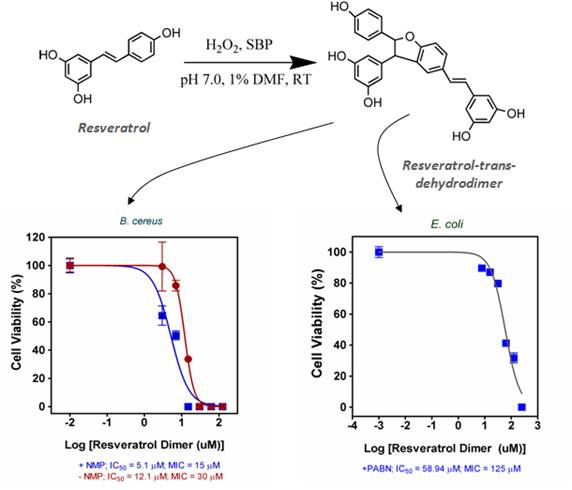