Polymerization has been historically an area where process systems engineering tools have been widely applied by combining polymer science, chemistry, and technology, with process engineering principles [1]. A significant amount of work has been devoted to the modeling and simulation of polymerization reaction systems, which are characterized by complex interactions between productivity indicators (conversion, batch time, profit, etc.) and polymer properties (polydispersity, molecular weight distribution, etc.). As a result, the design, operation and control of such polymerization processes constitute challenging problems, where the choice of the trajectories of the reactor temperature and monomer feed rate is targeting at an optimum trade-off between productivity and polymer quality [1,2]. However, other downstream tasks, in addition to the polymerization reaction, also contribute to the optimization of production objectives, either economic or environmental, as shown in the solution of the scheduling problem for polymerization manufacturing facilities [3].

In this context, the aim of this work is to direct attention towards simultaneous process and recipe design of industrial-sized polymerization processes, understood as the selection and interconnection of process stages and the specification of their operating strategy. A model-based optimization approach is used to optimize simultaneously the process and the corresponding recipe to produce a polymer in single-product batch campaigns as part of the design of a polymerization plant. This way, a trade-off between process and recipe design can be achieved  to improve production targets while maintaining polymer quality. Decisions related to the design and synthesis of the process include the selection of the type and number of process stages (also referred as tasks) and operations, the technological specification of processing units, the location of storage units, the recirculation of intermediate flows, the configuration of process stages in single, series or parallel operation, and the synchronization of tasks. Decisions referring to the operational design include the reference trajectories of the control variables, the batch  times, material transfer synchronization between tasks, and batching decisions. Besides, equipment investment, processing costs, raw material costs, waste treatment costs, and economic impact of product quality are considered in the optimization objective function.

In model-based optimization approaches for process synthesis, all processing alternatives are first represented in a superstructure, which is later formulated into a mathematical program to be finally optimized [4]. Particularly, the modeling approach used in this work relies in the combination of mixed-logic modeling [5], previously applied to continuous process synthesis, and the use of multistage models [6] to represent the performance of each batch task. The approach is similar to the disjunctive multistage modeling by Oldenburg and Marquardt [7], developed in the context of individual batch unit optimization, and now extended to represent concurrent process stages and their synchronization.

The main steps are following described: The available information for each processing stage is first identified, such as appropriated technologies or practical control variables. Then, a superstructure is constructed, which gathers together all potential synthesis alternatives. For that, state-equipment network (SEN) representation is used, assuming a direct relation between task and equipment. Logic variables and disjunctive equations are following defined to mathematically represent the qualitative information of such alternatives. Further available knowledge of the process that relates the various processing options can be incorporated into the model through logic propositions, which also limit the dimension of the combinatorial problem. Finally, multistage models are provided to represent each potential processing task, where material input and output stages are identified to allow the synchronization with other tasks. Dynamic, steady-state, or linearly approximated models can be used, according to the impact of each process stage on the decision criterion.

The acrylic fiber process is presented as an example of the proposed modeling approach to solve the process  and  recipe design problem simultaneously. The production target is a fiber composed of 85% in weight of acrylonitrile (AN), and 15% of vinyl acetate (VA) in spun format. Hence, primary copolymer production and secondary spun production stages are required. For that, the principal features of the manufacturing process are incorporated into the superstructure and the optimization model from related state-of-the-art literature. The principal information featuring the process is composed of:

À       the use of suspension and solution copolymerization technologies [8],

À       the possibility of avoiding solvent separation after the solution copolymerization reaction [9,10],

À       the operational information and dynamic models of copolymerization [11] and separation [7] processes,

À       and the possibility of recovering and reusing the water used to wash the final product [8].

As a result, the following process stages or tasks are subject to inclusion in the process model: (1) copolymerization reaction, (2) recovery of unreacted monomer, solvent and suspension medium after reaction, (3) washing and filtration, (4) repulping, (5) filtering, (6) wet spinning, (7) second washing and filtration, and (8) second recovery of solvent after spinning. For each process stage, several subtasks and configurations are allowed, which determine the required equipment pieces and their synchronization. All in all, eleven alternative disjunctions are considered for plant and process synthesis in the example, like the selection of solution or suspension copolymerization technology, organic or aqueous solvent in solution polymerization, separation of solvent or direct transference of solved copolymer to repulping, etc. Each of these options leads to a particular cost profile in the objective function. For example, the use of organic solvent drastically increases the waste treatment costs. The process superstructure is presented in Figure 1, where all synthesis alternatives are included, as well as the Booleans indicating if such alternative is selected (true value) or not (false value). 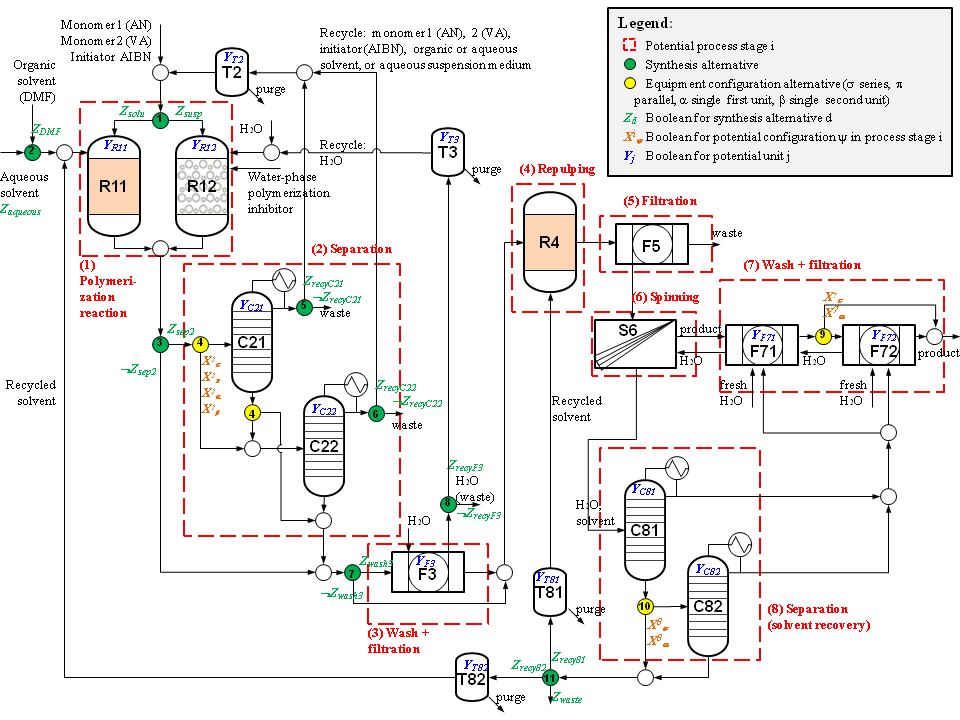 Regarding processing conditions, the process stages whose control variables have a critical impact on cost function are: task 1(copolymerization reaction), task 2 (recovery of unreacted monomer, solvent and suspension medium after reaction), and task 8 (recovery of the solvent after spinning and washing the final spun). For example, a large separation and reuse of solvent may partially mitigate its corresponding waste treatment cost, or the achievement of low conversions in the polymerization reaction may have an effect on higher processing costs in the subsequent distillation column. Hence, dynamic models are used to describe the tasks of these process stages, and their control variable trajectories and batch times are optimized. Particularly, monomer feed rate and temperature are the main dynamic variables used for reaction control, whereas distillation processes are basically controlled through the dynamic adjustment of their respective reflux ratios. Quality restrictions are formulated for polydispersity and composition in order to keep the product properties in the reactor within a predefined quality range. In other process stages, which are not critically contributing to the objective function, steady-state assumptions or other approximations can be done in their corresponding tasks.

By modeling and optimizing the process and recipe design simultaneously, a potential improvement in the objective function should be met, with respect to the use of fixed process models and recipes. This result is expected due to the holistic evaluation of the decision criteria. In particular, the trade-offs between the various process stages within the complete process is considered in the optimization, as well as the interactions between synthesis and operational design degrees of freedom. Additionally, the optimization model permits the evaluation and comparison of processing alternatives according to multiple points of view, like processing, economic or sustainable production policies.

This work has been developed   during the research project EHMAN (DPI2009-09386), funded by the Ministerio de Ciencia e Innovaci¾n of Spain and the European Commission (ERD Funds). Additional financial support of the Aachen group from the EU FP 7 project F³ Factory (grant agreement no: 228867) and of the MegaCarbon project (NRW-EU Ziel 2-Programm 2007 û 2013, EFRE) is gratefully acknowledged.