Nanog has been shown to regulate the proliferation capacity of Mesenchymal Stem Cells (MSCs) and alter their differentiation potential as assessed by overexpression and knock-down studies. Overexpression of Nanog in MSCs is known to reduce their adipogenic differentiation potential while inducing osteogenesis. Our laboratory has shown that Nanog overexpression in MSCs enhances their myogenic differentiation potential as evidenced by improved contractility. However the molecular mechanisms by which Nanog plays a specific role in differentiation are not known. In this study we present a novel tool for high throughput screening of different pathways in Nanog expressing MSCs. We employed a novel dual-promoter lentiviral vector (LVDP) carrying human PGK promoter driving the expression of DsRed serving as an internal control and the promoter of interest driving the expression of ZsGreen to monitor gene expression upon induction of Nanog expression in human Hair Follicle derived MSCs (hHF-MSCs) and Bone Marrow derived MSCs (hBM-MSCs). We employed a Tet-On system for induced expression of Nanog in hHF-MSCs and hBM-MSCs in the presence of doxycycline. The MSCs were transduced with a lentiviral library of about 60 vectors containing promoters and transcriptional response elements (RE) targeting about 25 different pathways and lineage specific markers. The cells were subsequently induced to myogenic differentiation and the promoter/RE activity was monitored over time with automated fluorescence microscope. Fluorescence intensity was quantified by Cell Profiler and the green fluorescence intensity was normalized by red fluorescence intensity. First, we used the lentiviral library to monitor gene expression dynamics during myogenic differentiation of hHF-MSCs and hBM-MSCs over a period of 7 days. Smooth muscle cell markers such as α-SMA, Myocardin, RE-CArG, and components of TGF-β1 signaling pathway such as RE-SMAD2/3 and RE-SMAD7 showed significant upregulation. In the presence of TGF-β1 receptor inhibitor SB431542, RE-SMAD2/3 and RE-SMAD7 did not respond, indicating that the pathway was shutdown as expected. We then employed the lentiviral array to identify which pathways were activated upon ectopic expression of Nanog. Overexpression of Nanog alone induced a marked response in RE-CArG within 3 days showing an enhanced potential for myogenic differentiation (Figure 1). Treatment of Nanog+ cells with TGF-β1 and Heparin further increased the activity of RE-CArG, suggesting that effects of Nanog and TGF-β1 in promoting MSC myogenesis were additive. RE-ERK representing the MAPK signaling pathway showed an increased activity in Nanog+ cells. However treatment of Nanog+ cells with TGF-β1 blocked its response. RE-STAT3 (JAK/STAT signaling pathway), RE-KLF4, RE-GATA and RE-GATA2 also showed significant activation in Nanog+ cells but treatment with TGF-β1 did not increase their response any further. We thus demonstrate the application of lentiviral arrays in monitoring gene expression during myogenic differentiation of hHF-MSCs and hBM-MSCs. We present a novel screening strategy to identify various pathways that are activated upon ectopic expression of Nanog in MSCs. Currently we are applying this approach to study the role of Nanog in osteogenic, chondrogenic and adipogenic differentiation. 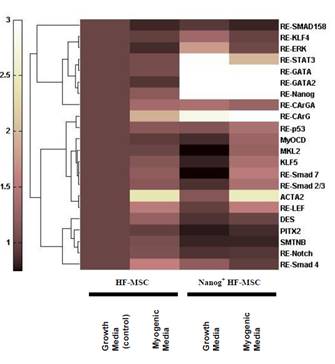