Although sulfur as an impurity on metallic alloys plays an important role in reducing the stability and corrosion resistance of the protective oxide layer and degrading the mechanical properties of the material, the underlying mechanism has not been clearly described yet. To investigate this mechanism, we have expanded our ReaxFF force fields for Fe/Al/Ni alloy[1] and the alloy oxide to Al/Ni//O/S interactions. This ReaxFF force field for Al/Ni//O/S interactions is fitted against quantum mechanical (QM) calculations. The QM data includes equation of state for crystal phases, heat of formation, adsorption on various metal surface sites and diffusion for the development of the force fields capable of describing the surface reactions as well as bulk properties. Although QM methods have served as useful tools for predicting molecular properties in small chemical systems, their computationally expensive cost has been a major practical obstacle to the application to large systems. On the other hand, ReaxFF performs the reactive molecular dynamics simulations at much cheaper computational cost. ReaxFF implemented in parallel molecular dynamics (MD) simulation packages is suitable for large scale systems larger than 106 atoms over time periods in the nanosecond regime. 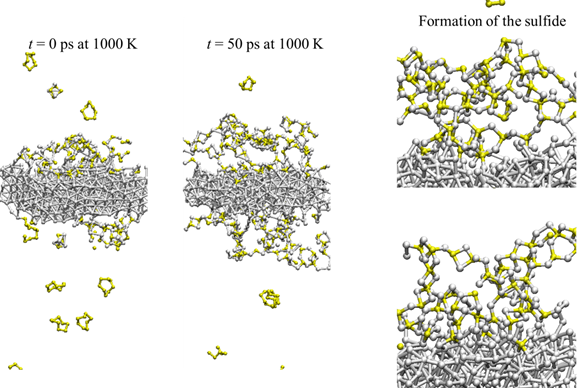