In the chemical industry several processes occur in the presence of particulate flows, such as for instance, the upward flow of catalytic particles in riser reactors in the petroleum industry, the pneumatic transport of solid particles in horizontal and vertical ducts, among others. The study of particulate flow in ducts does not seem to be as easy to study as expected. There are a lot of variables that may change the characteristics of the gas-solid flow in ducts, such as particle diameter distribution; particle-wall, particle-particle and particle-gas interactions; operational conditions, design and so on. One way to get important information about the flow conditions can be achieved by the acquisition of experimental data, which can be also applied to configure different mathematical models and within describe the entire system.

In order to analyze the behavior of gas-solid flow, the experimental nonintrusive technique of PIV was applied. This technique makes possible the acquisition of information about the microscopic velocity field in the bidimensional plane.

The physical experiments were conducted in the vertical and horizontal sections of a test facility. The operational conditions in the inlet were 140 m3/h of air and a 40 g/m3 mass load ratio, which are typical conditions for dilute flows. Solid-phase catalyst particles with a mean particle diameter of 56.7µm, similar to those in petroleum FCC systems, were used. Experimental radial profiles for the axial velocity data were compared with the respective numerical results obtained for the CFD code FLUENT 12. Turbulence in the gas phase was modeled with a k-epsilon model and the influence of the particle viscosity in the dilute phase was evaluated. Furthermore, the analysis of the drag force comparing different drag models, as Gidaspow, Morsi and Alexander, Syamlal and O'Brien, and a procedure known as EMMS theory (Energy Minimization Multi-Scale) was also investigated.

The numerical results obtained for different positions in the vertical (L/D = 1.8, 5.8 and 10.3) and the horizontal (L/D = 2.0, 5.5 and 13.0) duct showed a good agreement with the experimental data obtained with PIV, although no difference can be observed among the particle mean velocity profiles changing the viscosity for the solid phase. In consonance with these results, the different drag models presented the same behavior, showing that the mean particle velocity is not highly influenced by the drag model in dilute flows. Furthermore, a positive result was observed using the EMMS theory and presented in Figure 1 for the vertical section at L/D = 1.8. The result showed that the EMMS theory avoids numerical problems for the mean particle velocity profiles due to the small values of volume fraction for the solid phase. 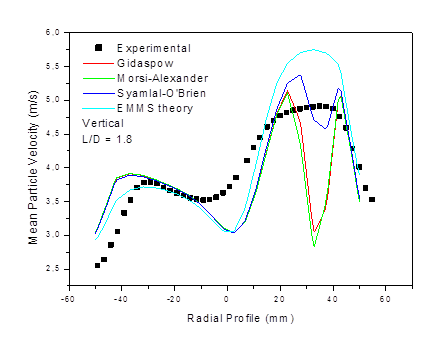